The Problem With Growing Up in FL

"There is nothing to fear but fear itself."--FDR
And alligators. And anything resembling an alligator. And snakes. And sharks and....actually, I am not entirely sure FDR knew what he was talking about.....
After all the other Florida-related things I have brought up in recent posts (think alligators) there is yet another problem with growing up in Florida. Actually, come to think of it, it's still just the gators.
The other night, right before lights out, I had a brief conversation with my mom on the phone. She was describing to me this rather large house spider that she and my nephew had found (think skinny tarantula without the fur, only found in Florida houses...and horror movies). Apparently, it was playing dead (like all sneaky spiders do!) and in her great wisdom, she decided to use the paper-cup technique for taking it out instead of assuming it was actually dead, which it was not. (And for those of you who are wondering why she wouldn't just smoosh it with her shoe, would you "smoosh" a large, squishy rat? Really?) Anyway, she is still alive to tell this story so she knows her spiders well. At any rate, she thought it might make a good blog post but I explained I had overdone the scary FL creatures posts. (Yet here we are, once again....)
That night I had nightmares of stealth alligators sneaking up on unsuspecting Minnesotan lake-goers. Good times. Really. 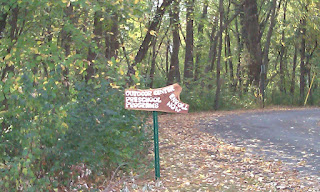 Then, while on my run the next day, I passed this fairly new sign at the Outdoor Center (a sign I have run by probably a hundred times in the last few months):
About half way around the lake, I started laughing to myself because the question dawned on me: Why does the Outdoor Center here in Eden Prairie, MN have an alligator sign? I was all "That is just downright silly! There are no alligators here in MN. What a goofy sign to have for the Outdoor Center!" So I had to circle the lake again to take a picture so that I could make fun of write about it on the blog.
And much to my surprise, the sign was clearly not an alligator but a log. SERIOUSLY?!
I thought, "Oh no, I have finally lost it!" But then I reminded myself, that no, I haven't. This is simply a basic survival instinct associated with being born and raised in Florida: The land of ten million gators.
It is a problem none-the-less because when you see a log in the water, I see an alligator. Every. Single. Time. And I would have stubbornly fought with you that that sign was an alligator, not a log. (Of course, in my pretty lame defense, I'd probably stubbornly fight with you over just about anything....I should probably work on that....) And when you see a kid casually floating on a log (I am sure that happens somewhere) and think nothing of it, I would panic: "What does that kid think he's doing? Why is he riding an alligator? Call the police! Call the Coast Guard! Where is HIS MOTHER?!"
She's probably at home busy not worrying because after all, this is Minnesota: The Land of Ten Thousand Alligator-Free Lakes. It says that on our license plates, too.....more or less.
Posted by karen diane at 5:51 AM