Speaking of spiders, winter is coming. The best part of winter in Minnesota is that if, no, when the kids leave a cup full of milk out in the car, you don't have to worry about your stomach lurching when you find it days later completely curdled. As a matter of fact, in winter, the milk would still be good! Did you accidentally leave in your car the two gallons of milk that you just bought at the store? No problem! (Although you might have to defrost it...oh, and for the record, I learned yesterday that we have not yet hit this point....)

So, although the spiders and other creatures start coming in to avoid the cold, we no longer have to worry about those crazy (scary) black widow spiders in California. We are no longer keeping count of how many we get rid of in and around our house. Instead, we have a new count: mice.

I told Kurt a few weeks back that I had found some mice droppings on my laundry folding table UNDER OUR CLEAN CLOTHES! (Ewww.) So, we put out two traps in the basement laundry room. Later that evening, Kurt and I were sitting downstairs, watching some telly, when he paused the program and said:

"Uh, yeah," I said, getting up and heading into the laundry room. One of the traps was sitting there, not sprung, and the other trap WAS MISSING!

We followed the sound until we found a poor little mouse trapped behind the dryer, its tail stuck in the trap dragging behind him and rendering him completely incapable of getting out from behind the machines. No telling how he got there to begin with.

Now, despite the story my brother could tell about me as a teenager and the fish tank I left outside, letting the water completely evaporate and discovering firsthand about the phrase "fish out of water", I am a big animal lover. (Hey, those fish were kind of sickly looking anyway. No one can prove that they didn't die of natural causes....although I would personally put my money on cause of death being no water...) But I am the one who wants to plant lettuce in my yard in order to feed the bunnies. You know those pesky little chipmunks that other people try to get rid of? Yeah, we name them and then throw stuff out to feed them. When I was 8 years old, I tried to save a nest full of featherless baby birds that had been abandoned when we moved our trailer out of reach of their mom. (They all died but I tried hard until the very end, syringe full of milk in hand....Ok, so no one told me they didn't drink milk or eat mashed up cheese! Sheesh!)

So, my heart sank when I saw the two beady little mouse eyes looking into our flashlight. Thoughts of cages and rehabilitation fluttered into my head. Afterall, the kids really do want a pet...

Kurt on the other hand, had other plans. He ran upstairs and got a coat hanger. He stretched it out making it as long as could be and then I took on the task of climbing onto the machines and fishing the little guy out. Although I had the wise idea of just letting him go in the park down the street, I was vetoed and he ended up in a bag in our trashcan (and my stomach in knots...) Poor little thing...

It was after the next mouse stuffed himself under my washing machine, apparently having not been killed by the trap initially either, that Kurt went out and bought some new, fancier traps. When the kids noticed, they got very excited.

"Do we get to keep the mice?" Lily asked when we explained we were "catching" them. She started talking cages and names...Argh!

We have caught 10 mice in the last 3 weeks. And winter has yet to begin. (Thank goodness these aren't protected under the Animal Welfare Act I suppose...) I have to admit though, I kind of prefer deadly spiders....there's less PETA guilt involved anyway...
Posted by karen diane at 6:32 AM No comments:

Last night, as I was putting the girls to bed, Madeline noticed a spider crawling on the ceiling above her.

"Mom, look! A SPIDER!" she said, quite composed given the circumstances. (Perhaps it has not occurred to her just yet that spiders can fall.)

"Oh, let me grab a glass to catch it in. Pull your covers over your head so it doesn't fall on you," I said. (I just love how wide her eyes can get!)

I got the glass, came back and climbed up on her bed. (She has the upper loft of the girls' bedroom set so I can pretty much touch the ceiling when standing on her bed.) The spider fell pretty quickly into the glass. That is when I noticed there was just a little bit of water on the bottom of the glass in which the spider took a swim.

I carefully climbed down from Madeline's bed, onto Lily's bed. Lily was watching intently, covers pulled close to her chin. (She apparently understands the full potential of falling spiders!)

"Hey Lily, do you want me to pour this spider on you?" I teased.

"NOOOOOO!" she screeched, pulling the covers a little tighter.

"I'm just teasing, " I assured her. And then, as if on cue, the spider JUMPED OUT OF THE WATER, OUT OF THE GLASS and right onto Lily's covers!

Doh. Didn't see that comin'!
Posted by karen diane at 6:01 AM No comments: 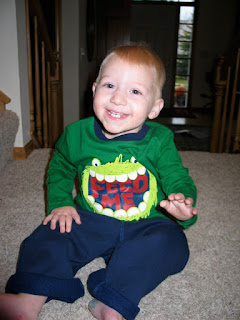 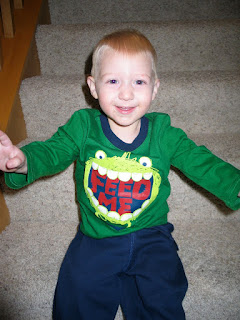 Lembas-a special, extra nutritious bread made by the elves that is often used as sustenance on long journeys. For the hobbits, one bite could keep them full for hours.


Said the neurologist to Liam: "What a happy little elf you are!" (Ok, that's a paraphrase.) "What brings you to see me?"

"Well, he has had growth issues and developmental delays so our doctor is sending us all over to see if we can better figure it out," I explained.

She proceeded to weigh and measure Liam and, after deciding she is not comfortable with the tininess of his head, ordered a sedated brain MRI (scheduled for the day before Thanksgiving) in order to rule out any possible malformations. Good times.

We also discussed the possibility of going to the special Feeding Clinic here in order to figure out how we can enhance Liam's diet to help him grow better. I am guessing they will simply tell us to stop feeding him the lembas and instead, replace it with homemade chocolate frosted chocolate cupcakes which he so eagerly inhaled at Madeline's 5th birthday party....so much for keeping in touch with those elfin roots but hey, we found something the kid will eat...finally!

Speaking of Madeline's birthday, she had a wonderful weekend filled with family visiting from Florida and a party with about a dozen little preschool girls. At the beginning of her party we had all the girls color fairy posters to use as place mats. One of the girls walked in, saw the others coloring and announced:

"I don't want to color because I don't really like coloring."

"I like roosters!" she said again before running off to color.

"Oooooooh," I said, thinking 'because THAT makes sense...but it's totally making the blog!'
Posted by karen diane at 5:43 PM No comments: