Liam is almost 20 months old and because he is not yet walking we were highly encouraged by a loving friend to have him evaluated by a group here called Shield. So, a nurse came out to assess Liam about a week ago and sure enough, after an hour of evaluation she confirmed that Liam can't walk yet.
Seriously though, she took out a bunch of age-appropriate toys from her Mary Poppins style bag and observed Liam as he eagerly interacted with her and the student nurse that had come along for the ride. They were quickly taken by his smiley charm and bubbly personality. He did everything they told him to do (fed the baby doll, pulled himself up in order to fetch the doll from the sofa, stacked blocks, put the blocks in a cup and poured them out, etc.) except for stand and walk by himself. After Liam helped her clean up, the nurse told me she would fill out the paper work, send copies off to us and our pediatrician and then refer him on to the Early Childhood specialists in our school district who will also come out to assess him and then, assuming by that point he hasn't climbed Mt. Kilimanjaro already, they will send out a Physical Therapist to get him up to speed.
The nurse wanted to also make me aware that while Liam is working hard learning to walk, we might notice that he stops talking so much.
Uh, right....I'm not sure if she noticed but he really doesn't talk much to begin with. I mean, we would be hard pressed to notice if he stopped doing something he didn't do yet but hey, I'm not the nurse.
Be assured though, Liam has made great, um, strides this last week in the gross motor department. For example, he will now take a few steps by himself in order to be rewarded with tiny marshmallows. Although this might sound like I am taking a more primitive or perhaps dog-training approach, it's actually beginning to seem quite appropriate. Just the other day, when I put Liam down on the ground at one of Aidan's soccer games, a little girl came up and asked: "Can I pet him?" Amused, I said sure and then assured her he doesn't bite...usually.
So, because he is so small and because he is lagging behind in both verbal skills (as compared to chatty Maddie at this age) and gross motor skills, everyone and their mother tries to help him along. The best example of this happened on the way to church last week. Kurt's mother was in the back seat with the kids trying to get Liam to repeat the words she said. The conversation went like this:
"Say 'car' Liam," she said. "Liam, say 'caaaar.'"
"Eeeeeeeeeeeeeeeee," Liam said, almost as if he were on a roller coaster.
"Say 'car' Liam, 'car,'" she repeated.
"Ahhhhhhhhhhhhhhh," he said, cheerfully pointing out the window. (I am sure he was pointing at cars...)
"Liam, say 'Mama,'" she said. "'Mamamamama."
"Ahhhhma," he said, looking at me.
Then my mother-in-law said, "Good, now say..........oh my gosh I can't believe the trees are changing colors already!"
I laughed till the tears rolled down my face and about flooded the car. But perhaps you had to be there....And although Liam might not be able to talk yet, if he could, I'm guessing he would have replied with something like this:
"What'chu talkin' bout Willis?!"
Posted by karen diane at 5:44 PM No comments:

One thing I love about the internet is that there is always someone out there who has way too much time on their hands and can provide me with just what I need for my blog entry. Take this video for perfect example: Chickens Playing Soccer. This is exactly what it is like watching an under 8 soccer team, only, the chickens have far more moves!
So, after taking some time away from sports, Aidan decided he wanted to try soccer again this year. Having played soccer at the collegiate level myself I was thrilled he wanted to take another shot at it. That thrill was mixed with complete dread about the hyper-competitiveness and intensity of other parents and coaches. But, Kurt volunteered to be the assistant coach and off we went, into soccer season on an under-8 team.
The season is underway and yesterday we took Kurt's parents to watch Aidan's soccer game. Each team has to provide one parent volunteer to be a line judge and since I was standing there, looking completely uninterested, I was given the task.

It was actually quite fun being a line judge, swearing the ball was hit off the other team when it wasn't (just kidding of course) and helping the kids get their throw-ins and corner kicks off. At first, I would try to give our boys some help as to where to throw the ball: "Look, Will is open. Throw it to him." But after a while, I realized I needed to say only two things: "Keep your feet behind the line, no, not on the line, behind the line..." and "Keep your feet on the ground when you throw."

This was accentuated by a throw-in that took place by the opposing team. The ball had gone out right past mid-field on our end and the coach was telling the kid to throw it to Zack: "Look, Zack is down the field and open....throw it to Zack. Do you see Zack? Throw it to Zack. Are you listening? Throw it in already, TO ZACK!" At which point I am fairly certain the coach was jumping up and down on his head with his arms frantically waving in the air. So, the kid, looking like a deer stunned by headlights, contorts his entire body around, twisting it in some acrobatic-like way in order to throw the ball the totally opposite direction down towards their end of the field, (but hey, he had his feet behind the line and kept them on the ground!) One of our players took off with the ball and their coach, completely beside himself, made the mistake of asking: "Why did you throw it that way? What were you thinking?" To which his player replied: "Parker was open so I threw it to Parker."

Parker was their goalie. And over half a field away. And his throw went all of about 5 feet, maybe....

I about burst out laughing but seeing as how the coach looked like he may need therapy later, or at least some strong mixed drinks, I kept it together. And I will admit, he didn't appreciate it several such episodes later when I made the comment: "Maybe you ought to tell them the opposite of what you actually want to get them to do what you really want." He had words, in his heavily-European-accented voice, that didn't sound very amused....

At any rate, we can't talk much because by the end of the game, Aidan, who has shown much more promise this year of at least being interested in playing soccer, asked Kurt to please take him off the field because his leg hurt. He limped over, holding his leg as if he had been severely injured. As soon as he was off the field, he sprinted the fifty yards to Liam who was practicing his walking on another soccer field. I am not certain which part of his leg was hurt but it certainly did not appear to be the running part!

Alas, such is the way with chickens, what can I say....

One of the very best parts of parenthood, in my humble opinion, is the artwork that takes place right around 3 years of age. Lily announced she had drawn a picture of me yesterday and held up her doodle thingamajig. (I'm sure that's how they advertise these things too!) The similarities between her drawing and my self are simply amazing....really....my arms and legs do come straight out of my head, just like that! And yes, I do have a halo around my entire body, in case you were wondering. 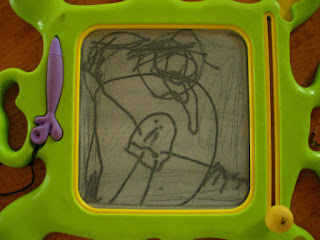 (Obviously, she gets this talent from her father as I was never able to draw with such artistic prowess....hee hee hee....)
Posted by karen diane at 7:10 AM No comments: 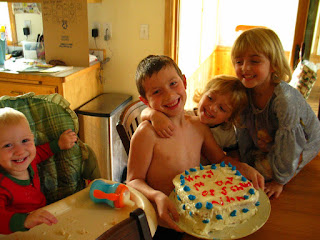