Joy and Peace to You and Yours

Top Ten Warning Signs That Your Chicken Obsession Has Gone Too Far:

2. Your spouse tells you that you are starting to kiss like a chicken….so you peck him on the cheek and waddle off.

3. Anytime you see something move in the grass, you quickly stop and scratch at the ground with your foot to see if you should catch it, you know, for the chickens….

4. You consider naming the store bought chicken you bring home because, 'that chicken was a somebody at some point too ya know!'

5. You talk to your hens as if they could understand you or would actually give a hoot even if they could. (And then get mad when they ignore your requests…..)

6. You tell your six year old son to go wake up his brother. He runs upstairs and you hear him crow: "Cock-a-doodle doooooo!" (Presumably right in his brother's ear….)

7.When your neighbor gets all giddy because he "got you some chicken poop" you know exactly what he means and you get totally excited too because you have never had the chance to actually use the Chicken Poop (chapstick) that you had blogged about years before. (I can now confirm it is better than the real thing….hee hee.) Thanks, Big E!

8. It takes you a week to get the lights on your Christmas Chicken Coop just right (including taking down the first batch because you are pretty sure the hens don't like the chintzy looking multi-colored lights that match the lights at the chicken-hating neighbor's house……because every time they, the hens, not the neighbors, are out they try to peck at the blue ones…..) And even after settling for red lights with a white star on top, you are already plotting in your head how you might do them differently next year.

9. and 10. (Yes, this one really deserves at least two places….) You are happily making your typical old Christmas cookies when you notice that your "harp" cookie cutter produces cookies that look just like little chickens! After several dozen little chicken cookies later (and irritating two little girls in the process, both of whom work very hard sneaking in a bell and a tree and a heart whenever they can) you vaguely remember the great big metal chicken form (wall decor maybe?) that someone gave you as part of a gift basket last year so you ecstatically send your kid up to grab it while you make another two batches of dough so that instead of making little trees, bells, ornaments and snowmen you make this:


And then, as you are merrily baking, you begin telling your children the REAL story behind the Wise Men….you know, the one where it was actually the Christmas Chicken that lead the Wise Men to the stable….. it was dinner time, after all, and those Christmas Chickens were TERRIBLY hungry. Thank goodness for the Great Christmas Chicken or else poor little Jesus's birth might have been completely overlooked, he'd have gone totally unadorned, the Wise Men wouldn't have delivered any gifts and we'd be out a Christmas carol or two, at least. And THEN, as if that weren't bad enough, Santa would not have thought to start bringing presents to all the little girls and boys and Christmas as we know it would not even exist! (And all us modern parents would sing praises of joy!) So YOU'D BETTER BE THANKFUL FOR THE GREAT CHRISTMAS CHICKEN!!!!

My kids didn't buy it either. Whatever. These little cluckers are gonna rock as Christmas gifts for my neighbors though. They will be iced and decorated and wrapped with a little tag that simply says:

And the best part, if you receive one of these as a gift, you know you are either one of my very favorite people ever, or one of my least favorite…..it's like a clucking Christmas mystery. And if you just don't care one way or the other, simply bite the little pecker's head off and forget it ever happened.

*Keep shaking your head Kurt….it only gets better from here!

Posted by karen diane at 9:59 AM No comments:

My Kids Have Issues (But Would You Expect Anything Less?)

I sang to the boys the other night. It was the first time in years….Twinkle, Irish Lullaby, Little Bunny Foo Foo, Hush a Bye Baby (which somehow included "if that diamond ring don't shine, papa's gonna buy you a porcupine….if that porcupine's no fun, papa's gonna buy you an air soft gun….." it was all smooth sailing from there…) Then I took requests, Baby Beluga, The Star Spangled Banner, Take me Out to the Ball Game, and when I said, "Ok, one more," Liam requested I Drive Your Truck and Solly insisted, "No, let's do Ten Rounds of Jose Cuervo!"

Oh, if only they would…..bedtime would become a piece of cake.

So, a friend posted on Facebook a link to watch James Taylor playing Christmas music on the guitar. It was delightful, as JT tends to be. Aidan was watching over my shoulder and at the end he says:

"Wow, if that guy could only sing he'd probably be famous."

I really don't think he is mine actually. So, I sent him to bed hungry and told him he couldn't come back out until he could play or sing even half as well as JT.

Me (after running my fingers through 3 year old Solly's freshly washed hair): Solly, what is that in your hair???
Solly: Ah, it's jus' some ticks. (I swear I heard a country twang.)
Me: Um, if you have ticks on your head we should probably remove them.
Solly: Nah. I like 'em there. Ticks belong in the hair.
Apparently I'm raisin' me up some hillbillies folks! Next thing you know, he'll be out there punching the chickens to keep them in their place…..oh wait, he already does that, too.

While Thanksgiving is long gone and far away from what is the week before Christmas (ALREADY!) I had to share a couple of my favorite moments from our first Turkey Day trip down to Florida in what has been far too many years.

My mom is a true southerner……when she talks about it "being cold up north" she is referring to where my brother lives in Gainesville. (Look it up if you don't know where that is.) So we had just arrived, after 18 traveling hours, and were in the kitchen, getting dinner ready when I realize I am sweating.

Me: "Mom, I'll be right back. I'm just going to turn the air conditioning down a little."

My mom, sounding a little surprised that I need to adjust the air: "Well, I just turned it down to 78 degrees."

Uh, yeah, and there in lies the problem!

After a couple of days at my folks' place we traveled inland to my Grandmother's house. GiGi just turned 96 this year. She is doing fabulously and we were excited to spend some time with her. But it can be a little much for all those kids and cousins to take over her house so I kept sending the kids outside to play. On one such occasion, the adults decided we would sit outside on her patio and get some fresh air as well. Solomon came over with a cup full of ice cream and was complaining because he had blue marker on his fingers and wanted me to wash it off. So enraptured by our conversations, I really didn't want to get up and take him inside (or perhaps that is laziness….) so I kept telling him we would wash his hands AFTER he finished the ice cream. Stubbornly, he didn't waiver in his request. My uncle took over:

Uncle: "Solomon, did you know that eating ice cream helps get rid of blue on your fingers?"

Solomon didn't seem to believe him but he was listening.

Uncle (full of enthusiasm and sincerity): "It's true! Start eating your ice cream and the blue will start to disappear. Go ahead, try it!"

Solomon slowly started eating the ice cream. Then he remembered his blue fingers.

Solomon (holding out his hand): "It's not working."

Solomon started eating his ice cream again and just as soon as I thought he had forgotten the fingers my uncle says:

"Oh look, Solomon! I think it is working! Your fingers are not as blue as they were a few minutes ago. Keep on eating that ice cream!"

Solomon obliged. And of course, after he finished his ice cream, he had completely forgotten the blue fingers and off he went to play with the other kids.

A few hours later, we were in the kitchen about to prep for dinner when Solomon walked in on a mission.

"Mom," he frantically says, with as much seriousness as a three year old can muster. "My fingers are blue again. I need more ice cream!"


Have a great day everyone and all the best in your holiday preparations. For those of you who are (smartly) simply awaiting the birth of their lord, kudos to you. Enjoy yourself while the rest of us are frantically cursing at the school because, SERIOUSLY?! A TWO HOUR DELAY TODAY????? Good heavens! Are you TRYING to give all us parents (who were using this last day of school before break on last minute Christmas preparations) heart attacks??? Sheesh!

You have to be kidding me.

It has been one year since Pennsylvania welcomed us. 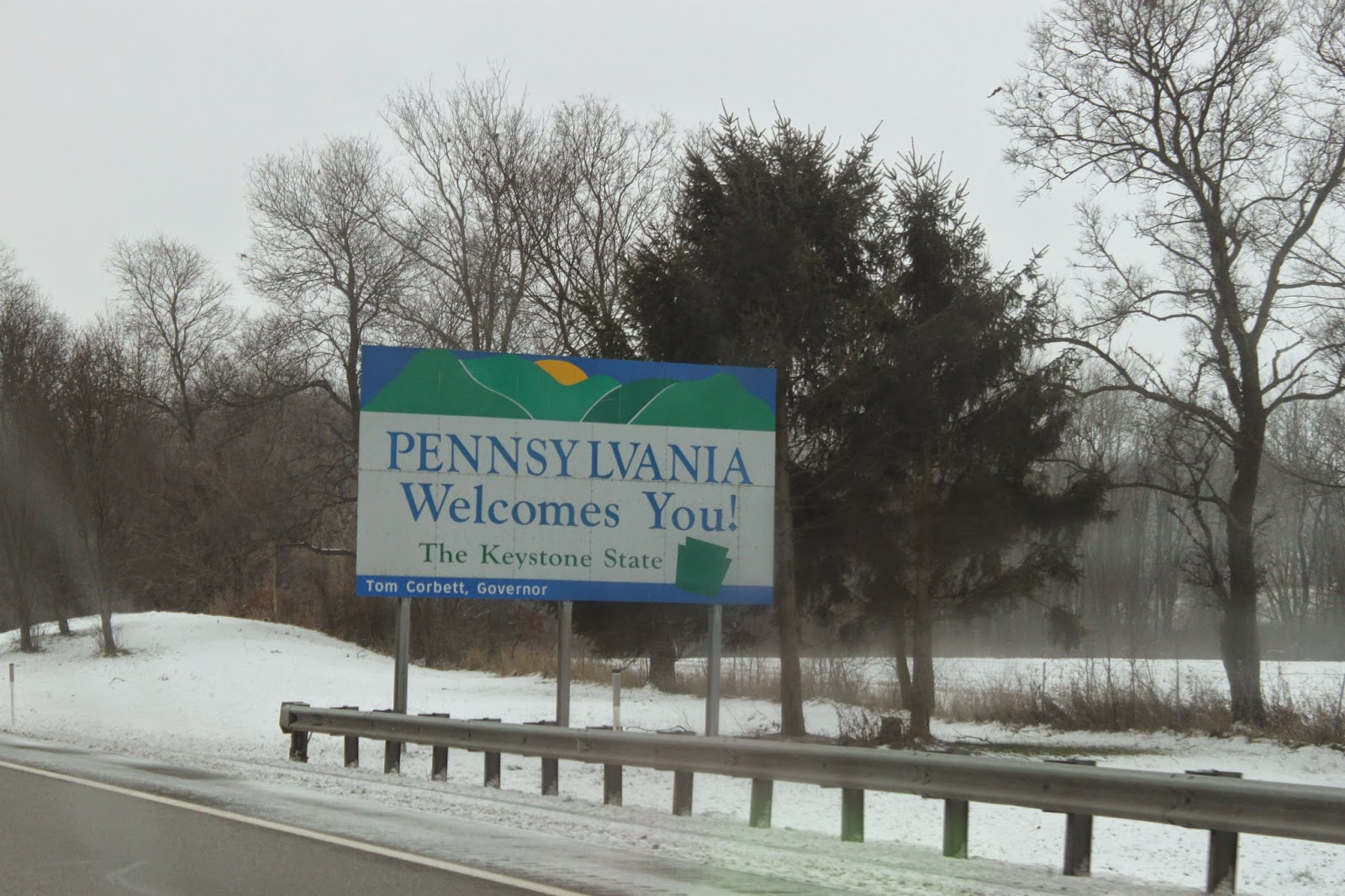 We have learned. We have laughed. We have cried and cried some more. (And I'll admit to a little cursing here and there along the way……that Solomon, I tell ya….) It has been nothing short of an adventure. And that is why we are very sorry to see it come to an end so quickly…

Sheesh. I almost gave myself a heart attack just writing that! Anyway, it has been a while and I just thought I would share this important milestone with you. We landed here a year ago and have not been the same since. And that's not such a bad thing as it turns out.

Here's to a year down and many more to go! Cheers!
Posted by karen diane at 8:17 PM 1 comment: