While I don't like to make a habit of telling second hand stories about my kids, this one is too good to pass up.

The other night, after having put the kids to bed, I was sitting at the table listening to the girls scrambling around their room. How two kids, who don't weigh 75 pounds combined, can sound like a heard of elephants is beyond me, but one thing is certain: they were not sleeping.

Kurt came in and asked what was going on up there. I told him they were "going to bed" but perhaps he could go settle them down since my efforts had not been fruitful. His story goes something like this:

"Girls, it's time to lay down and go to sleep," Kurt said after entering their bedroom. Madeline was sitting "innocently" on her bed, reading books while Lily was standing up in the middle of her bed, with a spastic energy about her. Both girls complained they "couldn't get to sleep." (Probably due to the circus activities I had been hearing overhead for the last 20 minutes, but then, that's only a guess.) Kurt put them both into "sleeping" position while telling them to be quiet.

"The problem is, I have a headache," Lily said. Kurt went to rub her head and found her dripping with sweat.

"That's because you've been running around up here getting all sweaty," Kurt told her.

Then Madeline chimed in, "Yeah, and because I have been hitting you over the head with my books."

There is nothing quite like an honest child. Have a great weekend!
Posted by karen diane at 7:14 AM 1 comment:

The Trip: An Overview

I read a book recently by Max Lucado. It was great. I checked it out of my church library and when I got home realized it was the "Comfort Print Edition" (a.k.a LARGE PRINT). I have to admit, it was certainly comfy!
At any rate, one page of his book really struck me as a writer. In it, he wrote:
"I believe in brevity. Cut the fat and keep the fact. Give us words to chew on, not words to wade through. Thoughts that spark, not lines that drag. More periods. Fewer commas.
Distill it.
Barebone it.
Bareknuckle it.
Concise (but not cute). Clear (but not shallow). Vivid (but not detailed.) That's good writing. That's good reading. But that's hard work!" --from When God Whispers Your Name.
Ok, so I fail miserably at brevity in this blog (forgive me but I really like complete sentences!) but for the sake of time, here are a few highlights from this year's FL trip (as concise as I can make 'em...which ain't very!)
The house next to my parents' house recently sold. It's a wreck. The yard is a wreck. The house is a wreck. It's being torn apart inside to prepare for the new family. Workers are there each day but what struck me is this: I was there for over 3 weeks and outside that house sat a pink toilet. In the yard. For three weeks. And of course, this is the house across the street from the people who planted a cactus wall in their front yard and painted the house lime green and have giant tortoises for pets....and who live next to the couple who have trained the neighborhood flock of peacocks to come at certain times to be fed.
I turned out okay, don't ya think?
Liam: We have such a hard time getting Liam to eat (hence the lack of growth) but one day, while out by the pool, I discovered that he LOVES to be squirted in the face with a spray bottle. (Apparently he takes after our cat.) So that afternoon, I was able to get him to eat an entire meal by spraying him for every bite he took. Hey, whatever works.
One day I took the four kids and their cousin down the to park. It was a fairly hot day so we retreated into a nice gazebo where we played Duck, Duck, Goose around a picnic table. Liam, not understanding exactly how it works and being our "lover-child", opted to go around hugging everyone until, after about the third time around, I finally yelled Goose for him. Instead of running back to the empty seat, he ran down the ramp, away from the gazebo. If only I had brought that spray bottle to keep him close!
Lily: When we arrived in Florida, we stopped by my brother Andrew's house for dinner before finishing up the last three hours of driving. As we were loading up to leave, Andrew brought out a pair of his daughter's clogs to hand down to Lily.
"Here Lily, try on these shoes," he said.
"No," Lily refused, suspiciously.
"Lily, just try them on to see if they fit and you can have them," Andrew said.
"No," she stubbornly replied.
"Lily, guess what? These are Magical Princess Shoes!" Andrew explained in an hushed yet excitable tone of voice. "If you put them on, they will turn you into a Princess!"
Lily started crying. "I don't want to try them on."
"Lily, it's okay. You don't have to try them on," Andrew said. "But if you want to be a princess, you have to put them on."
I got into the car. Lily, still crying, blurted out, "Mommy, I don't WANT to be a princess! Do I have to put them on?"
I don't think she is going to wear those shoes, ever. Unless, perhaps, they become "Magical Dragon Shoes" or something.
Madeline: Swimming in the pool one day, Madeline was staring at my rapidly growing belly and said, "Mom, I hope you have another boy.....or a girl."
Phew, I think we got that one covered.
Later in the trip, Madeline was getting homesick.
"Mom, how long until we go home to Minnesota?"
"Two days," I said.
"Ahhh, on one hand that is sad because we have to leave grandma but on the other hand it is happy because we'll get to see Leroy!" (Sorry Kurt, you got trumped by the cat.)
I arrived in Florida with one fairly strong swimmer (Aidan) and three certain drowners. I am happy to report that after three weeks, I brought home 1 strong swimmer, 1 super-duper doggy-paddler (i.e. non-drowner!), 1 so-close-to-getting-it-you-can-almost-imagine-the-drowner-is-just-floating-contently, and one still certain drowner (as was proven a day or two before we left when Liam got knocked into the deep-end on accident and I had to go jumping in after him in my brand spanking new running shoes....what we do for our kids, sheesh!)
And finally, I knew I had fully reintegrated into the south when, after almost hitting a huge wild turkey flying across the highway, my first thought was: "Gee, I wonder if it'd be legal to take it on home to cook up for dinner...you know, if you accidentally hit the thing."
Posted by karen diane at 6:26 PM No comments:

The Zucchini (or When Bigger is Not Better)

Three and a half weeks. That is how long the kids and I were in Florida. After having planted our huge garden out back in late May and early June, we left it in the care of Kurt while we traveled south. Now, when we left, the plants were all seedlings and starter plants: tiny, pathetic looking things, some seemingly unsustainable looking in that great big space.
Then it rained and the sun shined and Kurt tended the garden ever so carefully. And we came back to a forest of tomato plants that had pulled their cages out of the ground and were grabbing out for anything they might catch a hold of while falling every which way, cucumber and squash vines that had all but taken over an entire side of the fence, bell peppers spilling forth, peas and beans coming out the wazoo, baby lettuce that was far past its edibility...and then there was the zucchini plant. Having claimed a rather modest section of the garden to itself, it was healthy but looked like a pretty regular plant as far as I could tell. And then I looked to see if there was anything ready to pick.
Have you ever tried to explain to a guy that there are things in life that are not better when bigger? Let's just say, there is a reason they don't sell zucchini like this in the grocery store. (For starters, it would cost you like $10 upfront, not to mention the medical costs later for throwing your back out loading it into the cart....) 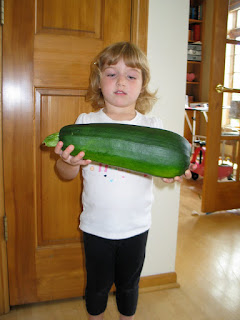 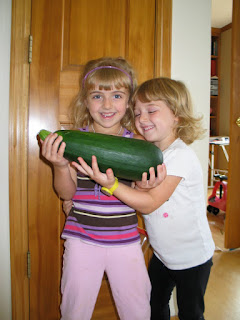 At least the girls got a kick out of it. And who knows, maybe it will give us the urge to enter some veggies in the state fair one of these years....
Posted by karen diane at 7:47 PM 3 comments: