Relativism is the concept that points of view have no absolute truth or validity, having only relative, subjective value according to differences in perception and consideration. -Wikipedia 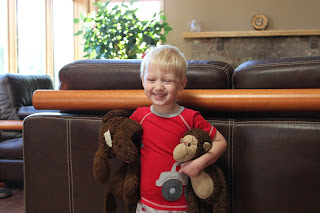 We have spent the last few years watching, hoping, praying, testing, and then driving Liam to all sorts of classes, doctors and other professionals who have helped get him to where he is today: a walking, talking, almost-jumping, charming three and a half year old who also happens to know all the letters and their sounds. And while we have seen progress in leaps and bounds this last year (ok, well, there haven't been any leaps yet) and we recognize he is so much closer to his peer group than he ever has been, Kurt and I still have moments of doubt and fear for him. We still wonder sometimes what the future holds and whether or not he will get caught up so completely that he can manage to get through school and hold jobs and be successfully independent on the often brutal path that life can sometimes take. And let's face it, he has a super happy disposition. It takes him half an hour to leave anywhere because he has to hug all the random strangers on the way out. Will life just squash him?


And then there are moments where we realize we have nothing to fear. One of these moments happened last week when I had finished teaching some new piano students. I went downstairs to talk to the mom, whom I had only met a week before. She was busy on the floor reading with Liam while her four children and three of mine were all playing Legos.

As I entered the room she looked up at me and said, "Liam is so smart! He knows all his letters and he read me that entire book!"

"Oh, yeah, he taught himself letters but he isn't really reading yet. He just memorized that one," I said. "And really, he is older than he looks. How old do you think he is?"

"He's three, right? He told me," she said. Now I was beaming. He finally remembered how old he is! Woo hoo! And here is someone who doesn't know our family, doesn't know Liam's story and thinks only that he is super smart. My how things have changed.

I was ecstatic to have a new point of view. I was so grateful that this mom spoke up and told me what she saw because sometimes it is easy to miss how far we have come on our journey. It was a great reminder that Liam is not the same little speechless boy we had fretted over. (Actually, I knew as much given how LOUD and NOISY he has recently become.....be careful what you pray for, sheesh!)

Later that day, while in my bathroom, I was thinking about the importance of recognizing where our children actually are instead of remaining stuck where they have been when Liam came waltzing in adorned in silky, red-satin gloves pulled up past his elbows, a red-velvet purse on his shoulder and sporting a hot pink hairband with a gigantic flower on top of his head.

"Well, perhaps it's all relative," I told him, chuckling to myself.

"What? WHAT?" he hollered back.

"Oh, nothing," I said. And he pranced on out to find the pink sword to complete his outfit.
Posted by karen diane at 7:05 AM