Bring on the Biddies!

And by biddy, I am referring to our newest female family members (not the oldest ones….)

So, while it may seem like I should never be allowed to bring another animal home again given the feelings of impending doom that frequently occur upon their arrival (unless that animal is a human animal because some how or another that seems to have no such affect on me….Kurt on the other hand…..) we, or perhaps I, decided recently that it was time to go ahead and expand our family. I don't know whether it is because spring has finally sprung (or attempted to) or because I have been counting down the days since we arrived on our imaginary farm, but when I saw the box the treadmill was in, I knew I had found the perfect "brooder" for our peeps and went about getting everything ready. Heat lamp, check. Thermometer, check. Box with packing paper covered flooring, check. Waterer, feeder, starter feed, pine shavings, check, check, check, check. So, when the ad online said that the chicks had hatched and were ready for the taking, I immediately picked up the phone and called the farm which was only about 45 minutes northeast of us. After all, the brooder had been up and running for a week (because I needed to be assured I could keep the correct temps without baking our babies and burning the house down, if you recall the Bearded Dragon episode before Christmas….)

So, on Sunday, I packed up the kids and one of our neighbor kids (because what the heck, there's always room for more right?) and our only smallish box (which ironically enough was the packaging for "chicken tenders: quality frozen fully cooked chicken") and off we went.  Freehling Farms is a rather large dairy farm where the husband and wife (about my age) also dabble in chickens (and by dabble I mean they keep about 50-100 chicken for themselves while hatching and selling off the rest….) The conversations on the road went something like this:

Neighbor Kid (as we were winding our way through miles of back roads): Wow, I've lived here all my life and never been around here.

Madeline, (with what I am sure was a hint of pride and not really mature tact): Yeah, my mom likes to take us on lots of adventures.

A few miles later, as we hit a highway and the country music was blaring and everyone in the car was belting out "I drive your truck…..I roll every window down and I burn up, every back road in this town….." the neighbor kid started again:

"Why do you think every country song is about love and beer?" (Well, duh, what else is worth crooning about? I thought.) "I mean, my favorite song is Country Fried," she said.  I wanted to say, "Well, what do you think you are going to wash that Country Fried food down with? Milk?" But then, she probably isn't going to reach for a beer at 10.

Anyway, we arrived at the farm and hurried out of the truck to meet Roger, a friendly guy about my age who has lived on the farm all his life. His much younger brother was with him, and as luck would have it, he dabbles in rabbit breeding (what good fortune!!!) and they showed us to the tiny peeps, fresh from the egg and ready to roll. Roger chose 6 for us to take home, put them in a much smaller box than our big Frozen Chicken Tenders box (I think he wanted to make the chicks feel like they were not being sent off to their doom, which, of course, might actually be the case but at least his box wasn't advertising it!) and as we were leaving and I was asking a million questions he gave me the best piece of advice:

"Don't over think it. They are only chickens."

Recognizing he was ready for us to leave, I told him thanks and that I'd come back to replace them next week if things go south. He smiled a knowing smile and said he thought we would be just fine. (I think he may have said a little prayer later to make sure of it.)

And after texting him that evening because none of our chicks were drinking, and they all kept just falling asleep all over the place and I was sure maybe we were going to kill them, he reassured me that they were fine and that gave me enough confidence to pick up another 6 the following day from our local Agway store. You know, because people always say things are cheaper by the dozen. Actually, they cost me more and so I can't claim they are cheaper but they are definitely messier by the dozen!

So, welcome Butterscotch (Madeline's chick), Fluttercup (Lily's), Olli Matta and Syndey Crosby (Liam's chicks because he couldn't decide which Penguin to name his after), and Judas (a.k.a Judy……we thought she was going to die so we figured if we were going to lose one of the twelve, it should be Judas. But then she made a remarkable recovery….um, she woke up from her nap….and so we thought she deserved to be called Judy instead) and the other 7 unnamed babes (Aidan isn't sure whether to name his Geddy Lee or something else…..we'll see what he comes up with and then I will get to name the rest…..probably after my friends all across the country because how better to honor those you love but to name your hens after them…..there could be my three D's: Miss Deb, Dawn, Danielle and who knows, maybe you dear reader will make the team as well. (Bribes are totally acceptable under the circumstances.)

Oh, what was that? You want pictures? I thought you would never ask! Enjoy! 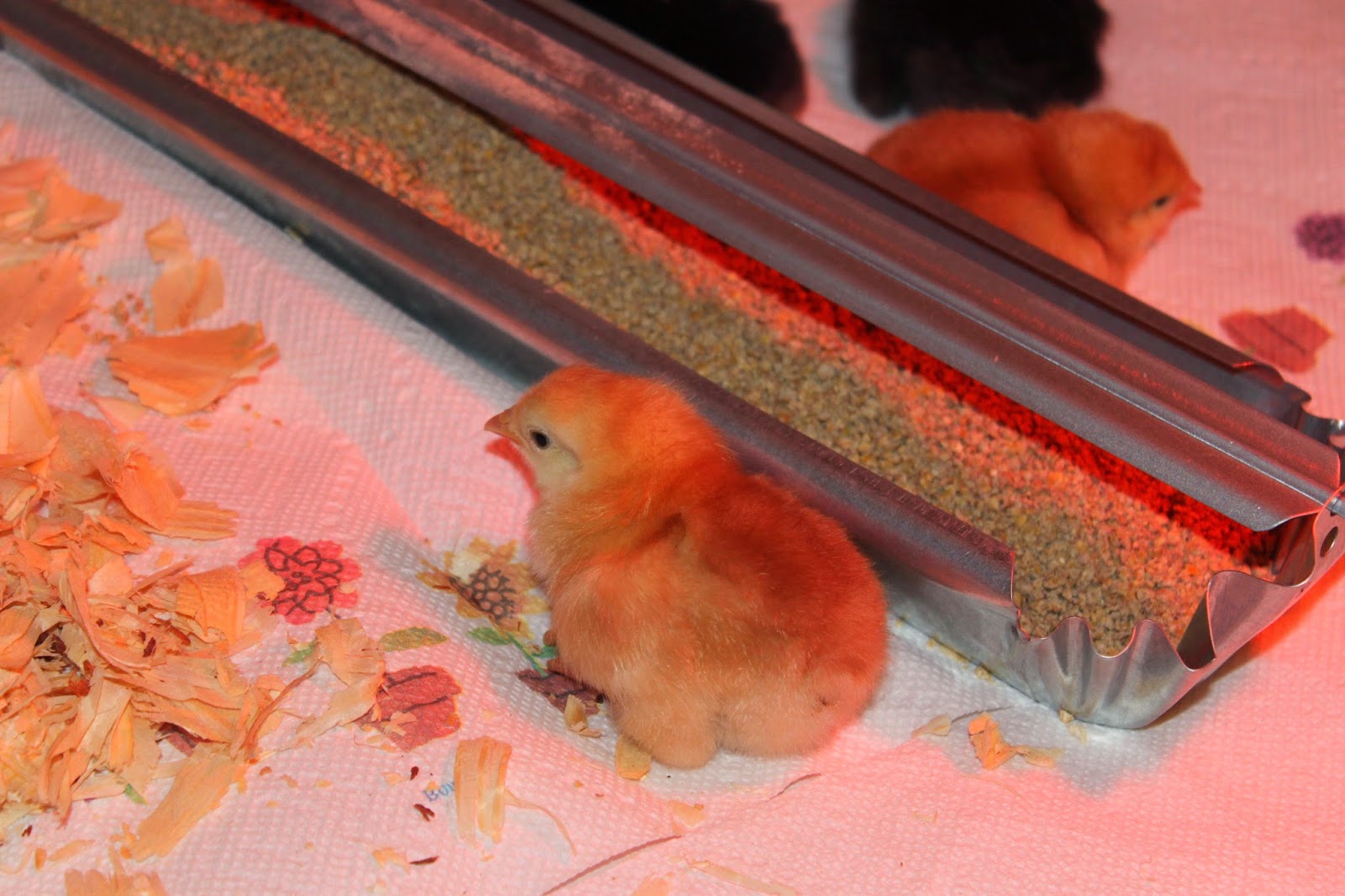 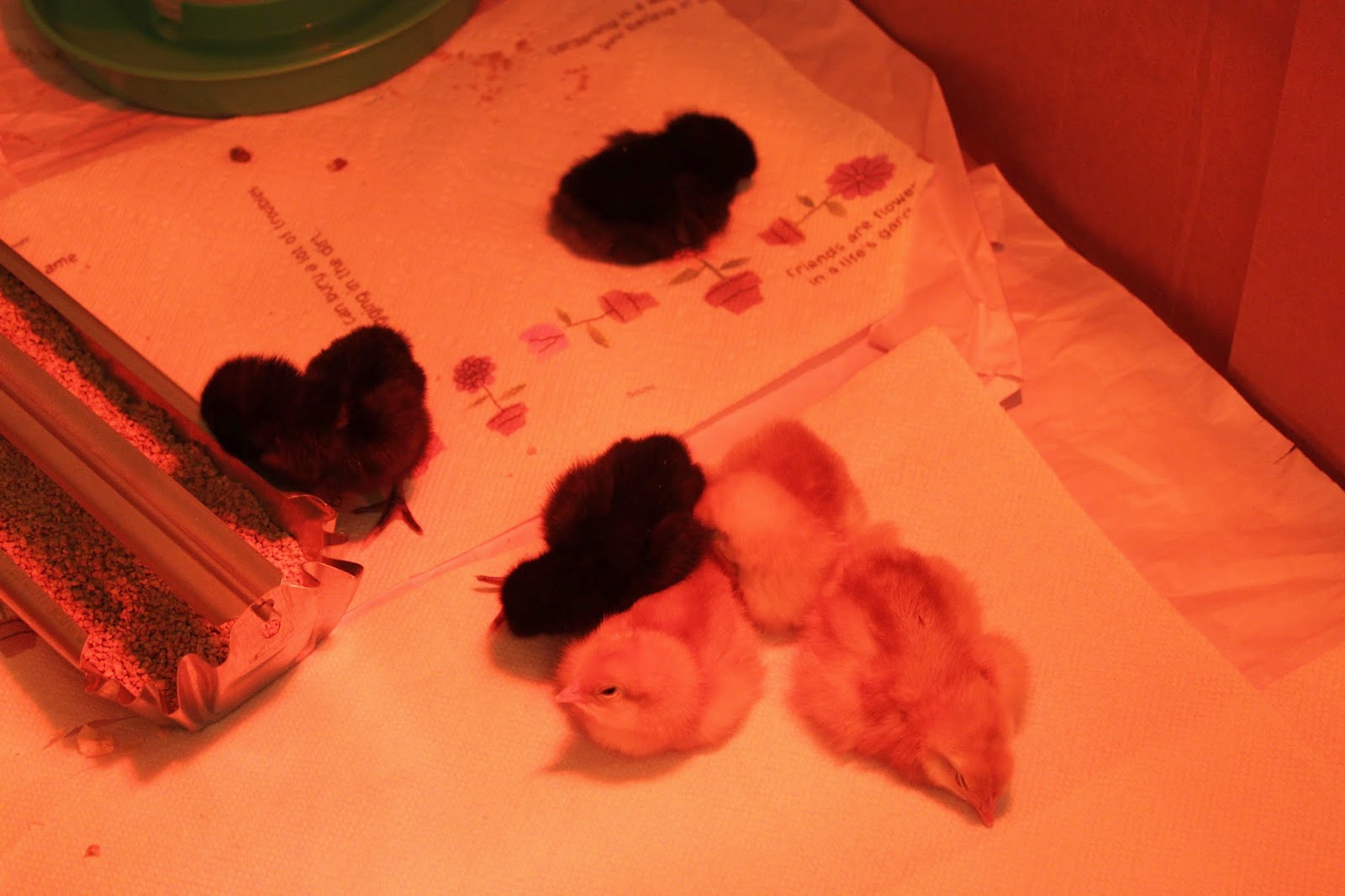 I know you want to see more, but you will have to be patient. I haven't uploaded the addition of the six Rhode Island Reds. But I am happy to report that we are on day two with all 12 and so far, all are still alive and I have even had to make a chicken-wire cover for the brooding box because they are totally brilliant and have already started trying to fly! They are such naturals! It makes our hearts happy.

Have a great day!