I come to the garden alone, while the dew is still on the roses,
and the voice I hear falling on my ear, the son of God discloses.
--Miles, C. Austin

Well, ok, so there are no roses in my backyard garden and I almost never make it out there before the dew has burnt off and I am pretty certain that the voices I hear are that of five little children screaming at me from the deck because "he pushed me" "because she annoyed me" and "mom, can I have the iPod" and "me want toast!" (The only thing God is disclosing in these moments is that I really need to teach them how to weed more and fight less and perhaps use proper grammar!)

But alas, I do frequently go out to my garden alone. I like to dig my hands in the gritty dirt and really feel the earth. I like to watch the little seeds grow from seemingly nothing into great big plants and overtaking, jungle-like vines. I admit, I love my garden shoes

my mom bought me for my birthday and I jump at the chance to put them on for a bit.....

And I absolutely LOVE, and by love I am talking about the giddiness of a child in the candy shop with a grandparent whose last words they hear are "whatever you want dear," I LOVE when it is time to harvest. 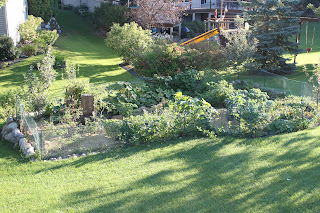 I have to admit, this year has been a little disappointing. The weather has been odd (which basically means it has been normal for Minnesota although those of us living here always like to pretend that "this is so unusual" for any given time of year.) The summer was cooler or drier or wetter or something (I am not 100% sure because we were gone for so much of it.)

But, the tomatoes did very poorly (I say this as I am weeding full-fledge tomato plants out of the garden that came up while I was in Florida....from seeds still hanging around from last year's crop!) The few corn stalks we planted out-and-out died (apparently even corn needs water, who'd've thought!) Two of our apple trees didn't grow any apples....again. Most of the peas I planted never bore any peas. One of my zucchini plants gave me two humungous zucchinis and then withered away into nothingness (from dust to dust.....) Fortunately, the other zucchini plant made up for it by creating new shoots and taking over the middle of the garden. Now if it would just keep up the veggie-bearing.....but I believe the days are numbered.

At any rate, not including the spinach and lettuce that we ate in abundance early on, the big winners this year are:

1) Kale....I am the only one who really likes it (think kale-chips, sauteed kale, soy-sauce drenched kale, etc.) but since even the garden pests avoid eating it, the kale has been a HUGE success in my opinion.

2) Brussel sprouts....they have been super fun although no one seems to want to eat them either. Madeline requested that we grow them because she used to eat them up, yum. But alas, they are apparently more fun to grow than to eat!

3) Green beans....these are the super delicious beans my mother-in-law gave me last year (and if I am correct, her father grew them in Italy and brought them here and she has been growing them from seed each year ever since, but I might have that story wrong so don't quote me...) I planted far more seeds than we got plants but we are finally harvesting too many green beans to actually eat so it all worked out. (Thanks Mamma Maria....these are "proven winners" with the kids, too!)

4) The vining fruits are coming into their own and we can't wait to try them! I am giving them instant winner status this year just because they are so cool to watch grow! Have you ever seen a canteloupe change from a green hanging bulb into the fruit we see in the store? It is really cool! 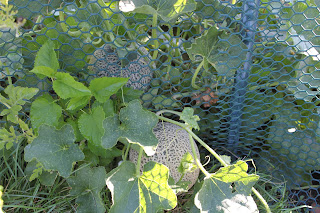 Here is a sampling of one day's pick a week or so ago: 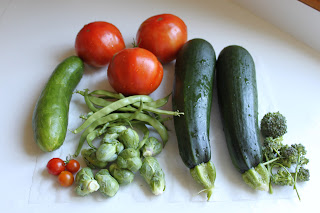 Here is what came out two days later: 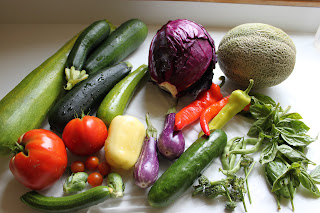 I suppose there is nothing to be disappointed about when I really take stock of what we are getting. Shoot, I could feed an entire village in many places in the world! We are truly grateful! But I am definitely in need of a few new recipes. There is only so much sliced-grated-peeled-unpeeled-raw-baked-sauted-boat-filled-zucchini one can eat. I'm getting ready to try out a few new chocolate zucchini bread/cake/muffin recipes to freeze for winter but surely there is something I am missing! And along those lines, I now have enough pesto to last us all year.....mmmmmm.....I'm so glad I planted that second basil plant. I think I will make another dozen batches of pesto before the frost hits.
But my favorite story in this year's garden adventure has to do with the watermelons I planted. You see, about mid-spring the kids and I decided we would add some melons to our garden. We went to the store, picked out some nice looking watermelon plants and a few cantaloupe plants as well and planted them against the fence of our garden. Well, a month or so later I was looking at one of the watermelon vines, thinking, "What oddly shaped watermelons." The other plant had fruit coming in like this, clearly a watermelon: 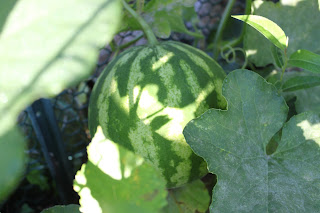 But, the odd "watermelon" plant had fruit growing like this with much greener stripes at the time: 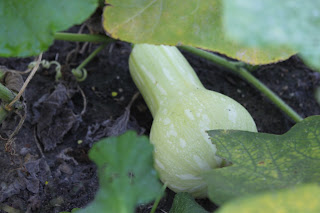 So, I kept thinking, well, maybe there is a different species of watermelon I don't know about. Or perhaps they just start off oddly shaped before filling in. All the while, I couldn't help but think they sure looked more like a squash. Then one day I told Kurt to come take a look at the funky melons we were growing and he said, "Are you sure they are watermelons? They look like squash." I didn't buy any squash but something in his matter-of-fact way snapped me back to reality. Well, duh. They certainly are squash....lots and lots of butternut squash! And just about ready to pick, too! 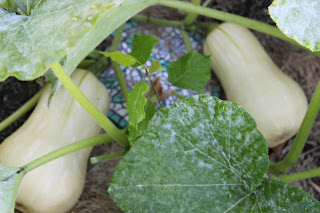 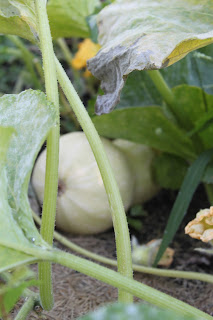 What a pleasant surprise! Apparently the nursery mixed up the plants because I know I bought a 4-pack of watermelons. It's like two-for-the-price-of-one if you think about it. Who needs four watermelon vines when you can have two watermelon and two butternut squash vines instead??? (I just wish they would have labeled them correctly so that I wasn't sitting here confused all summer!) Now, I will need to find a good butternut squash soup recipe that I can freeze....anyone? Anyone?


"And the joy we share, as we tarry there, none other has ever known."