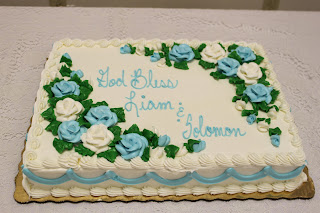 Sunday we had the joy of gathering our family and close friends at my grandma's church in Lakeland, FL, to have our two youngest baptized. It is the same church Lily was baptized in a few years back....the same church my parents were married in a century or so ago (hee hee, sorry guys) and our crew just about doubled the summer congregation.

Having never had a talking child baptized before, I spent a little time with Liam in the few days beforehand rehearsing the words and the act of placing water on his head. I was a wee bit concerned because every time I'd tell him he'd be baptized  "in the name of the Father, the Son and the Holy Spirit, Amen" he'd eagerly say: "and the moon?"

I figured if he said that in the moment it would create a memorable one so I certainly didn't fret over it. And when his moment came, he smiled as if he was having the time of his life....like all the world was his stage, or at least this particular church and it went smashingly well. I am surprised he didn't take a bow and thank his "audience" actually. Solomon, having just woken up from a nap, sang and cooed the entire service, especially in the silence, or should I say when it was supposed to be silent since he pretty much filled the entire void.

At any rate, Liam's true colors shined through this weekend. He made many new fans out of family members we don't see often enough, the most notable being my new brother-in-law who told me at the party: "I love Liam. He's totally insane."

Having spent the morning in utter chaos and still feeling rather stressed, I took exception with the comment and said, "He's not insane. He just smiles a lot and is really happy." About that time Liam caught our eyes as he went spinning by in circles with his smiling head twirling quickly around as if he were trying to recreate that sick feeling you get when you step out of a Gravitron or some other crazy amusement park ride.

"Ok, you got me there," I admitted, laughing. "He might be a little crazy."

When the party was over and we found a calm, quiet moment at my Grandma's house, I called Liam over to where I was sitting with my grandmother so that he could open his little present from her. (The tradition is for her to buy each of the grandbabies a sterling silver cup while my aunts get them a sterling spoon.) He immediately unwrapped the two jewelry store boxes and said "Yay, boxes!" before he put them down and turned to play with something else.

"Liam, you have to open the boxes to see what's in them silly," I said.

He came back and opened the first little flat box which contained a spoon wrapped in tissues. He only saw the paper.

For all of you who have never believed me when I have told you my young children need nothing more than wrapped boxes....I stand corrected: you were right. The joy he got from thinking he was getting tissues in that box was well worth putting a little paper inside!