"At the turn of the 20th century, HRM (His Royal Majesty) Rex Goliath was the treasured attraction of a Texas circus. People came from far and wide to behold the 47 lb. bird, billed as the “World’s Largest Rooster.”" --from Rex Goliath website

Kurt and I have never been big drinkers. But recently (and by recent I mean with the addition of a fifth child) we have been a little more frequent in our partaking. This has been enhanced by having found Rex Goliath.

Now, a friend had mentioned Rex to me a year or so ago, right after I had run across him in a store and made a mental note to try him out one day. And of course, I was pregnant and so had to put it on a back burner until after Solomon came along. Fairly soon after his birth, I went through a few months of searching: searching for the best "cheap" bottle of wine. I figured if I could find the best bottle of wine for under $8, we could afford to have a glass or two here and there.

Bottle after bottle, Kurt and I sipped. Some were REALLY bad, meant only for those who shouldn't be drinking it anyway, others were really REALLY bad, some just semi-bad and still others, drinkable. And then I happened to pick up three bottles of Rex Goliath. 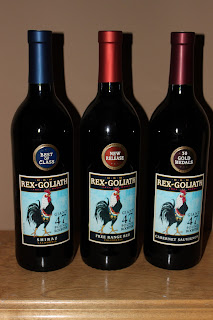 They happened to be on sale that day for $3.99 a piece. No, I am not kidding. (Usually they run $5.99 at our store.) So, we first tried the Cabernet, which is typically my favorite. It lacked body. Actually, it tasted sort of like wine-flavored water....or what I imagine a zero-calorie wine-water would taste like. (Can you imagine? Sobe Life Water, Red Wine Flavored.) Anyway, it wasn't terrific. (But we dutifully drank it anyway.) A few weeks later, I took the Shiraz over to a friend's house. Again, nothing to write home about (but it didn't go unfinished either.)

Finally, when hope in the sanctity of Rex Goliath chicken wine was all but gone, we tried their newest variety: Free Range Red (a red blend).

Kurt has not enjoyed another wine since....really and truly. I pulled out this fabulous Sebastiani Cabernet for a dinner party at our house and he wouldn't drink it. He took one sip and then opened up more Free Range Red. What can I say, he's hooked! And rightfully so. For a bottle of cheap wine, it is pretty terrific. I am not a connoisseur by any stretch. I can't tell you what the flavors "hint" of or why we like it. All I know is, we have bought more Rex Goliath Free Range Red over the last few months than all other alcohol combined in the previous 10 years of our marriage. Now, I can't promise you that this isn't saying as much about having five children as it is about the particular wine, but, we have really enjoyed it....so much so that I was hoping to do a free wine giveaway....but apparently it is not legal. Sorry!

Anyway, I figure, any wine with a 47lb rooster mascot is the perfect wine. Go give it a try and let me know what you think!
Posted by karen diane at 9:00 AM