I'm fairly certain my mom wonders why I give Florida such a hard time. (Hello? Alligators!) It's not that I want to, it's just that, well, here's a snapshot of a one week segment during our Florida trip:

So, the kids had been swimming a lot and wanted to take a break. I suggested they go out to play in the sandbox. Lily was super excited and ran inside to try to convince the others to join her while I went to check for gators clean the sandbox up a bit since it hadn't been played in for a while. There were sticks and leaves, and water filled buckets (i.e. mosquito sitting on their nests, just waiting for their new brood to hatch and coming over ever so often for some sweet human nectar to hold them over till they could teach the next generation to feed on us...) and other such debris in it. I first started by getting rid of all the big twigs and leaves. I then dumped out a bucket full of water and as I was doing so I happened to notice a suspicious looking spider hanging up under the corner seat. Always on guard in Florida, I dumped the water on the spider. It landed in the sand and lo and behold it had a HUGE RED HOURGLASS on its belly. So I did what any responsible parent would do, I used the closest sand toy to fling it out of the sandbox toward the other side of the yard. Nope, no deadly spiders here, you can't prove a thing....la-ti-da.

Well, as luck would have it, Lily couldn't get anyone else on board anyway because it was so hot, so we all went back to the swimming pool. It hadn't been two hours since I found the lovely widow spider when I heard Madeline shout, "A Snake! A Snake!" as she jumped back into the deep end and swam quickly away. 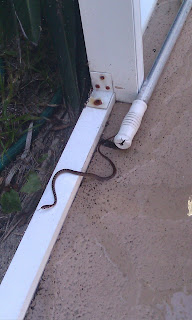 Sure enough, there was a lovely snake trapped in the pool area trying to wiggle out of the screen. My mom studied it to make sure it wasn't poisonous (something we don't have to do here in MN I might add) and we caught it in the pool net to take it out back to meet up with the spider still on the loose.

Well, then the kids got the bright idea that lizards would make great pets; after all, they are a dime a dozen around the pool. The girls were so excited when they had caught the first one.

I had to put a stop to it because, well, really, how many lizards does one bucket need? I was just glad they weren't shooting them with a b-b-gun like my brother used to do. Ick.

A few days later we were at my grandmother's house in Lakeland, FL and we were fortunate to catch a sighting of the house gecko. You see, there has been this rather large spotted gecko living outside her house for years now....it makes a lot of noise but I have to admit, it is pretty cool. 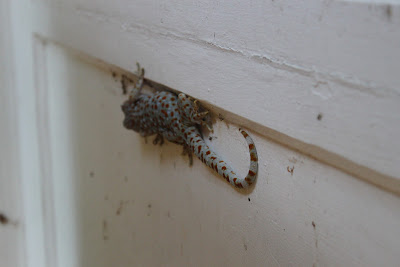 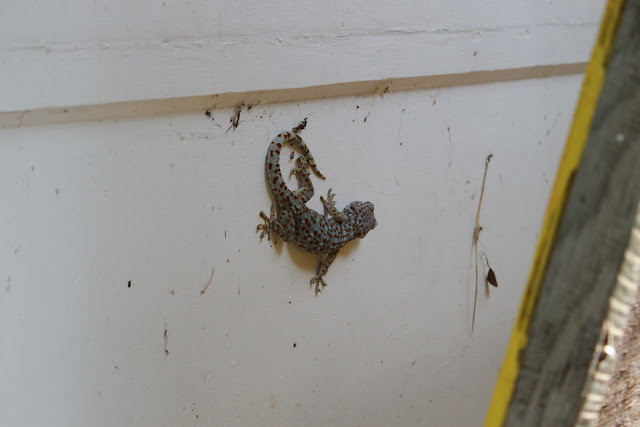 So, once we got back to my childhood home, we had a good friend over who is about to make a trek to Africa. She told us about all the things she needed for her adventure, like vaccines and mosquito nets etc. I asked, "Oh, so did you rent the mosquito net or buy it?"

"Oh, I bought it," she said. "I can use it here when I get back. It will really come in handy in my house."

And the night before we left, as I was debating in my mind whether the most recent (massive) mosquito bite on my leg looked more like a skunk, or a squirrel or "no, I think it definitely looks like a cat," I realized it was certainly time for my departure as I was getting eaten alive. One day, they will recommend all tourists visiting FL to bring mosquito nets. I wish I had! While everyone knows about the infiltration of the humans in the innocent mosquitoes' natural habitat, I wish we knew how to make them head south for the summer....or forever.

But even worse than the dozens of bites I seemed to come in with daily (which really is only an issue because there is always the possibility of them CARRYING WEST NILE VIRUS!), was the roach that crawled out of the box I was holding and ran up my arm. If you have never had a roach with those scratchy, brittle little legs crawl up your arm you are surely missing out. There is nothing quite like it. Thank God. (We don't have those here either.)

So, you see, it is rather easy to give Florida a hard time. As beautiful as it is, there are simply too many strange, wild, crazy other creatures sharing the space. Have I mentioned the alligators?
Posted by karen diane at 10:15 AM