A more upbeat version of the common children's rhyme goes like this:

Unfortunately, I can't find the music to share but it is an upbeat fusion of blues and rock with the added call of "Is he big" and then a little tiny voice responding, "No, he is an itsy bitsy spider."

But, lately, when I sing it to my kids, I can't help but think of Liam:

"No, he is an itsy bitsy toddler."

Weighing in at just a smidgen above 21 pounds, Liam turned two over the weekend. According to the growth charts, Liam is so little he doesn't actually exist. To put it in perspective, when our oldest son turned one, he weighed just under 24 pounds. At his second birthday, Aidan weighed 31 pounds. Liam, ten pounds lighter than his brother at the same age, is surely an itsy bitsy toddler.

But then, what do you expect of an elf? 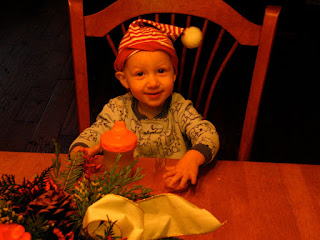 And, along with his tiny size, he is still not talking (except in sign-language). So asking him what he wanted for his birthday was kind of pointless. As a matter of fact, when I was asked about what grandparents and other loved-ones might get him for gifts, I had to stop myself from explaining that I was pretty certain all Liam really wanted was some new kitchen towels, a piano music organizer and possibly a new violin case and music stand. Although, if you asked Aidan, Liam really wanted a new Wii game and Madeline and Lily might have told you he wanted a kitten. Kurt probably would have said Liam really just wanted the house cleaned and tidied and instead of receiving toys, he really wanted to get rid of some....to be honest, it's hard to know for sure who was right! :)

At any rate, we wished him a very happy birthday on Sunday. He ate an elf-sized red-velvet cupcake, opened a present or two and smiled his sweet smile. Life is good, even when you're tiny. 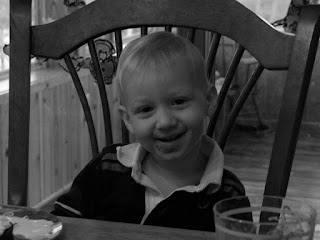 Happy Birthday Liam!
Posted by karen diane at 9:06 AM