"He's bad, bad Leroy Brown,
Baddest cat in the whole [darn] town
Badder than old King Kong
And he's meaner than a junkyard dog." -original lyrics by Jim Croce (but this is a variation that has been sung over the years....)

So, apparently the seams came unloose and started to unravel because Kurt and I decided to get the kids a cat for Valentine's Day. Yes, you read that right. A Cat. A handsome (yet gassy), Bobcat-like hairball named Leroy, possessing claws that could match any average Tiger. (Seriously, you'd think the shelter might consider cutting their nails ever so often! Sheesh!)

It seemed like a perfectly good idea at the time. I mean, I love animals (right?) and although I really wanted a nice, confined rabbit, I compromised with a cat thinking it was a good starter pet for the kids. (And the only one Kurt would actually agree to, might I add.) Now, you might be thinking: Why not just get a fish? Honestly, fish are as about as interesting as watching a wall. (And I have plenty of walls I don't have to feed!) At least cats have antics and are good for a laugh here and there.

So, 10 month old Leroy came home with us a week and a half ago. The kids were thrilled ("We get to keep him forever and ever? Until he DIES?!" Aidan asked, excitedly.) And then BAM! The anxiety hit like a Mack Truck.

What? Until he dies? Hold the phone! To what did we just commit?!

Now, rest assured, I did not panic with the stress of getting married and I had no major anxiety adding each additional kid to our family. But then came Leroy, the cat. Ever heard of the straw that broke the camel's back? Welcome Leroy. I hereby declare you a Basement Dweller!

I had such big panic attacks the first four days I thought I was allergic to him. I searched frantically for my inhaler, just in case the tightening in my chest was asthma coming on and one morning I even had to invite my neighbor friend over to calm me down. Because we had a cat. In the basement.

And then later that second day, when he jumped up on our couch, scaring Madeline who immediately pushed him off, which of course engaged his wild claws leaving quite an impression on the leather, I about had it. (Apparently scratched up furniture does nothing to quell anxiety....shocking.)

By Friday, I called Kurt crying because "I'm so sorry...We got a cat!... Waaaaaa!" And he just laughed and laughed.

And that is when it hit me: Well duh....how well do you think most chickens react to a cat in their coop? All this anxiety and territorial behavior I was exhibiting began to make sense. And I realized, I am fully and completely a nut-job! Surely the fact that in the midst of panic attacks over a cat I planned out where I would build my chicken coop under the deck and how I would convert the sunroom into a bunny habitat (you know, in the event that Kurt lost his marbles too and allowed it) confirms my nuttiness.

So, after admitting to myself and others I did not want to keep this cat, (I actually made tentative plans for just how he might take leave of our house), I forced myself to bond with the furball. I took the kids to the pet store to get a Furminator to help control the shedding as well as some cat treats and we headed down to the basement together to brush out his beautiful coat and begin the process of "training" him. I handed a treat to each of the kids and told them to give it to Leroy, making sure I called him by name rather than "the cat." Madeline and Lily immediately threw theirs at him and when I told Liam to give his to the cat he held up his empty hands and began to chew wildly.

"No, Liam! Don't eat the cat treat!" I said while trying to get his busy mouth open. He quickly swallowed and started signing "more, more, more."

Well shoot, maybe we HAVE been feeding Liam the wrong kind of food this whole time!

After watching Leroy fall into the toilet a few times (that's just plain funny), seeing how much abuse he tolerates from the kids who still think you can safely carry a cat by the neck, and in discovering I am not at all allergic, I now realize he is actually a decent fit for our family. And since Kurt was originally hoping we could rename the cat "Bruce Lee-roy" I will end on a few quotes from the martial arts master which help sum up this last week or so.

"There is no such thing as maturity. There is instead an ever-evolving process of maturing. Because when there is a maturity, there is a conclusion and a cessation. That’s the end. That’s when the coffin is closed. You might be deteriorating physically in the long process of aging, but your personal process of daily discovery is ongoing. You continue to learn more and more about yourself every day."
"Flow in the living moment. — We are always in a process of becoming and NOTHING is fixed. [Well, Leroy is...] Have no rigid system in you, and you'll be flexible to change with the ever changing. OPEN yourself and flow, my friend. Flow in the total openness of the living moment. If nothing within you stays rigid, outward things will disclose themselves. Moving, be like water. Still, be like a mirror. Respond like an echo."

"You cannot force the Now. — But can you neither condemn nor justify and yet be extraordinarily alive as you walk on? You can never invite the wind, but you must leave the window open." --Bruce Lee

And with any luck at all, the cat might just find that open window and escape!

One week down, only about eight hundred more to go.... 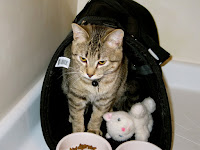 Leroy, post 'declaw' surgery
(We're a one strike you're out family apparently....)
Posted by karen diane at 6:33 AM