As seen in FL:
Got a voter registration card? Get Free Chicken Wings!
A man saw me shopping at Target today with all 4 kids. He looked at the kids and then stared me straight in the eye, waiting just long enough for it to be a little on the freaky side, and said, "You should be running the country."
Just so we are all clear, although the 5 of us made it in and out of Target, ONLY buying what we went there for, in less than 20 minutes, without a single melt down or even hint of whining (HOLY COW! We stayed in our budget, were expedient and didn't end up in a war! WE SO TOTALLY ROCK SQUIRT!) I should definitely NOT be running the country. And after Kurt gives you his top 100 reasons why that is the truth, I will invite you to come and watch inside our house a few evenings so that you can see things like tonight when we found Supergirl (Lily), an hour past her bedtime, sitting in the sink of the bathroom, painting herself with toothpaste.
Now, that wouldn't be such a "running-the-country" show-stopper if it weren't for the fact that at least twice in Florida I found Lily getting into mischief in the bathroom when she was supposedly sleeping: once she had poured out an entire bottle of bubble bath onto a step-stool...(I mean seriously, that is real talent right there. She was so careful that there wasn't even any on the floor!) And the other was this lovely finger painting she did around the sink... 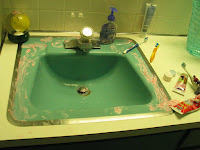 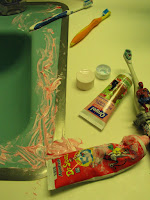 ....with the toothpaste...that she had ALL OVER HER BODY as well. (Sound familiar? You'd think I would learn eventually.) Point: I could not run the country. Then again, most of our country-runners can't either...hee hee hee..."country-runners"...and they let me vote! Free chicken anyone?
Posted by karen diane at 5:40 PM