Chicken Truck- an 18-wheeler with lots of lights on it. It can also mean a truck that hauls chickens (well, duh.) (Thanks to UrbanDictionary.com)
This morning, we decided we'd treat the kids to an hour at McDonalds where they could eat an unhealthy breakfast and play in the gigantic play structure while Kurt and I took it easy, sipping hot coffee and relaxing before our busy day began. And, with four tiny tykes, it went EXACTLY like that...without the taking it easy while sipping and relaxing, of course.
We were leaving the parking lot afterwards, when what to our wondering eyes should appear but a truck load of chickens so lively and dear (or they may have been cornish game hens or something else, live but certainly edible.) And I had to stop and point it out to the kids who didn't seem the least bit amused but seriously, how awesome is that! Here I am in need of a connection to chickens to make this blog run more smoothly, and there I was, watching several hundred birds in a giant truck right there at McDonalds (and who says their food isn't fresh?!)
Anyway, I've heard it said that if you give a little boy a banana, he'll make it into a gun whether he has seen a gun or not. This is also true if you give the boy a pirate ship pool complete with a canon water shooter, pirate flag, steering wheel and slide and a couple super soaker water guns...
The thing is, the options were few for the particular sized blow-up pool we wanted. We could get a cool pirate ship or a huge alligator and something about seeing my kids in the belly of a gator was a little too close for comfort having seen my fair share of gators; both in FL zoos and along side the highways and in the rivers and lakes and well, it seemed more disturbing to play the role of gator grub than that of Captain Cook.
Of course, unlike FL, we don't have alligator crossing signs or see gators walking along side the highways here in southern CA. That spot is reserved for illegals (a.k.a illegal immigrants), whom you will see being chased down by border patrol with vicious looking dogs and you can't help but feel for them. Down in San Diego, there used to be an illegal immigrant crossing sign and that is no joke:

And then someone got their feelings hurt about the insensitivity of the sign and they took it down which seems even more insensitive to me. Think about it. What is worse: a sign that might hurt someone's feelings or that same someone getting hit by a moving truck because the truck driver was not on the lookout? The truth, as sad as it may seem to some people out there, is this: there really are people who risk everything to get into this country. And who can blame them, when, for just under a days wage as a day laborer, you can get this: 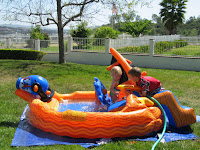 ....and still have enough for a fresh chicken dinner at McDonalds!
(Eat your heart out my MN friends...it was actually TOO hot to be out most of today!)
Posted by karen diane at 1:12 PM