"Spider expert Martin Nicholas traveled to South America's Amazon in search of a spider known as the chicken-eating spider... With the help of a tiny "spider cam" that can see down spider holes, Nicholas came face-to-face with a huge spider that is nearly a foot across and could easily eat a chicken." -NATURE

For the love of God! A foot-long spider?! Are you kidding me? As if the little spiders aren't scary enough! (Add that to my list of places I never need to visit...)
So, speaking of spiders: spider hunting and trapping season is upon us. I had hoped that we could go a little longer without our nightly spider-hunts but alas, it is here. I know because, beyond the growing presence of cellar spiders, Callobius spiders and numerous webs I am finding IN my house,  I found this resting on our wall outside a few days ago:

And although this little bugger is not a real danger (unless he bites you...OUCH! But at least he isn't lethal), he symbolizes that the weather is just right for breeding and thus, we will soon be seeing this (again): 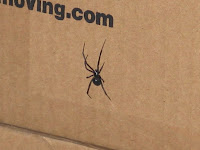 Ain't she a beaut?
And she can kill ya too!
Gotta love 'er...
Although there haven't been any human deaths from a Black Widow bite in over a decade, I don't intend to let anyone in my family be the first. Hence the reason my dear hubbie and I have declared a hunting season. And since today I found the first of the Black Widow spiderlings hiding out in our cooler we keep outside for lack of space anywhere else, it is time to start our nighttime reconnaissance missions: hunt and kill the mammas because they ain't gonna let my babies grow up to be cowboys...they sure as heck don't let their husbands...matter of fact, I have yet to find a female widow spider in my house and I am guessing that is why I have found several males inside...I mean, if you thought you might get eaten by your mate, wouldn't you try to hide where they were not?
One day, I hope to establish a healthy respect for these not-so-little ladies of the dark but until then: Widows Beware!
Having grown up in Florida, where it seems most creepy-crawly things are poisonous, I am familiar with deadly snakes and spiders (shoot, aren't they all?) but I didn't actually know there were Black Widows  (and Brown Widows....and Brown Recluses and...well you get my point) in our backyard until my mom mentioned it to me about this time last year in her oh-that's-not-such-a-big-deal way.
"What, were you trying to off us?" I wanted to ask. I mean, I understand the stress that might lead a mom to that feeling but seriously, it's just not cool. But no, people seem to take the 'don't ask, don't tell' approach to deadly spiders. Think about it, when was the last time you saw warnings about these things in the tourist brochures or new resident info packets? My neighbor has lived here 30 years and she had no clue there were widow spiders in our neighborhood until I happened to ask about how they controlled for them. Her husband, standing behind her, kept giving me that "please don't keep asking about this in front of her" look as he pleasantly admitted he may have seen one or two here and there over the years. One or two?! We killed hundreds last year! (Granted, only a dozen or so were full grown, the others were ballooning from the egg sac we happened to watch hatch before frantically trying to beat it down with a folded magazine, but still.)
At any rate, my mom somehow instilled in me the belief in the catch-and-release method of ridding the house of annoying pests. The problem with this is my hubbie has a GPS system and just keeps coming back...(kidding, only kidding.) Seriously though, the problem with the catch-and-release method is that I would then have to have deadly spiders alive in my car in order to take them far enough away from my house to where I felt comfy letting them go. The problem with that is, I would first have to catch them and if you have ever seen a Black Widow move, well, you know that they are about as fast as cheetahs. And the problem with catching them, even if I could, would be that I would have to open up the container to let them go and I am absolutely certain that at that point the Mamma Pest would get even by jumping on me and biting me and worst of all, CRAWLING on me!
Which reminds me of a scene from yesterday when I was running on the treadmill in the garage and Lily was playing with a broom.  All of a sudden, the broom drops and Lily comes running at me frantically squealing: "Spida, spida!" while marching her legs up in down in place and wiping at her clothes with one hand while trying to grab at one of her feet with the other.
I'm like, "Seriously? You know what a spider is?" and she didn't find it amusing when I started laughing at this, thinking how funny it is that at 21 months she already knows to do the spider dance... (similar to the chicken dance only a little more yelling and squirming and not so much dancing and music.)
"Spida! Spidaaaaaa!" she screams at me.
"I don't see anything Lily. But if you have a spider on you, take off your shoes," I tell her, as if that were the cure-all.
She takes off her shoes and hands them to me. I look and sure enough, no spider in sight. But there IS a nice long hair attached to the velcro which I am guessing had been tickling her leg and I know for certain that THAT is the feeling of a deadly spider on you and if I had to guess, it is at least a foot long and could gobble a chicken right up! (She comes by it honestly for sure.)
Posted by karen diane at 12:46 PM