Most Enthusiastic Baseball Player Ever to Walk the Earth

Steele: I want Rudy to dress in my place Coach. He deserves it.
Dan Devine: [Laughs] Don't be ridiculous, Georgia Tech is one of the top offense teams in the country. You are an All-American and our Captain, act like it!
Steel: I believe I am. [Lays down his jersey on Devine's desk and walks out]

If you know the movie, you know the scene. You know how those collegiate athletes, one by one, walked into the office of their Notre Dame coach and laid their jerseys down, asking him to let Rudy take their place in the last game of the season. You know how, eventually, the coach confirms Rudy's spot to dress for the game and run out on the field. You know the swell of emotion and uncontrollable tears of joy that the movie elicits from there until the end.....

We watch the movie Rudy a lot. Well, at least we did before it went missing. And we remind our kids of the determination that Rudy possessed, the belief in his ability to accomplish his dream and meet that goal of running onto the field for a game that he never gave up on.

In our family, Liam is our Rudy. Substitute little league baseball for college football and far less athleticism and size and you have our little Liam. He is the most enthusiastic baseball player that ever walked the earth. Grinning from ear to ear as he plays, he cheers (often for himself!), he gets passionately mad (sometimes) when he strikes out and he evokes joy and happiness from not only our team's parents but from the parents of every team we play. He is the only kid that the team shouts for when headed up to bat.

The kids genuinely want to see him succeed and urge him forward, even when he goes a full season without ever hitting a ball. He loves the game and when he is at home, his glove is on, ball in hand, as he pretends to play in our living room, commentating in a hushed whisper the play by play in his imagination. And while he will likely never be an All-Star, he doesn't let his developmental delays and Autism get in the way of playing his favorite game on earth with the hopes of playing forever.

So, it is understandable that while I watched the last few minutes of baseball camp yesterday, the part where they gave out awards, that I would feel an immense pang of sadness and heart break. The truth is, Liam has made huge strides. He has gone from not being able to even throw a ball, much less catch one, to actually making plays ever so often; fielding the ball and even throwing kids out. He has gone from being scared of even standing in the batters box, to actually batting with a fair amount of ease, sometimes even getting on base. And ever so often, he scores a run. And it makes his entire week.

As I stood there though, listening as they called up the the fourth place and third place and second place and first place winners for each age group, I felt such pain in my heart. Liam would likely never be one of those kids. If only the world gave awards for enthusiasm and joy.

But as the ceremony was coming to an end, the high school baseball coach leading the camp, paused and then very deliberately spoke about a player who had been knocked out at the very beginning of the competition but who had been unfazed, cheering every one else on, enthusiastically encouraging each player, applauding and boosting up every one of his teammates as if he, himself, were the one about to win. And for this, the Camper of the Week award goes to Liam Wolf.

The kids went wild! They screamed and cheered loudest of all for the smallest among them. And then chanted:

(Insert mom's heart ripping from her chest and oh, the tears....)

He might not make it to the World Series, but he has certainly stolen this crowd. And while the world doesn't often reward enthusiasm, his enthusiasm will undoubtably reward the world. 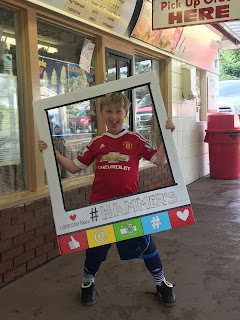