When Silence Sets In

As a mom of many, I probably should have a far greater concern for it actually.

As a mom of many, I welcome it.

Last week, my five year old had a friend here to play. They went upstairs to play legos and after a while, they were quiet. I called up to inquire about lunch, were they hungry? What did they want to eat?

Later I called up again. What do you two want for lunch? Mac and cheese? Yogurt?

Maybe I should have been worried: quiet, not hungry. But instead, like today as I await the chaos of the morning school rush, I glanced out of the window while I did my daily-dos and I savored the silence. 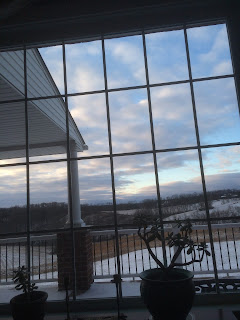 Yesterday, I got caught in life. Dishes, laundry, chickens, errands, fitness, cooking, cleaning, eating. The things that sustain the daily runnings of this house. There was no time for silence. Or at least, where there was, I filled it. I did pause briefly at one point, wondering about Lent, about sharing the lessons I am learning, am living, but my writing voice was silent. I sat down at the piano, filled the space with music instead of words, emptied myself.

It is hard to fill others when you are emptied.

It is hard to fill your self when you don't slow down.

It is hard to slow down.

Creating slows me down, empties me and fills me back up. All at once. But I have to show up to the process. Have to sit. Have to savor the silence and then break it.

It's hard to fill up unless you are empty.

Solly's friend came down hours later, found a graham cracker sitting on the counter and ate. One. Stale. Cracker.

When his mom arrived, I told her they played well but that her son had only eaten a cracker. She wasn't worried, nor was I.

Later, Solly and I cleaned his room. He threw something in the closet and quickly closed the door. I watched the sly look on his face and wondered but let it go until that night when I peeked behind that door. The quiet, happy, hunger-less playdate, a mystery no more!

Solomon blamed his buddy for finding the girls' hidden candy stash and tearing into every last morsel. His fullness and silence exposed his guilt. The girls were not nearly as amused as I was. They all love the same chocolate peanut butter cups, the ones the girls were saving for after Lent.....the boys enjoyed them quietly but immensely from the looks of it. They did not waste a one.

I don't fear silence; a chance to conjure up that which is hiding behind the door.

In the silence, I slow down. Fullness emptied.

In the silence, I feel the emptiness. Guilt exposed.

In silence, I fill up once more. Grace received.


I do not fear silence when silence sets in. I welcome it.

For there the sweetness of Grace abounds, brimming nourishment, no candy required.