How is it February?

Several years ago,  you may recall that I lead the blog through a minimalist phase.....you know, where I started purging the house of as much stuff as I could. Much to Kurt's dismay, I believe I only made it through the first few stages of my Pack Rat Anonymous posts but still, by the end of the experience, we were well on our way to be a little lighter in our house.

Well, little did I know that part of the minimalism would include such a huge reduction in blog posts. It used to be that I blogged several times a week.....sometimes daily. And then Solomon came along and RUINED EVERYTHING! Ok, not really. He is actually a pretty cool little chap, you know, when he isn't destroying things. (So much for his name meaning "peace" and all.)

So, last month, he turned 5. FIVE! He will head to kindergarten this fall. He will learn to ride a bike (maybe) and tie shoes (assuming I stop buying velcro) and read (if he ever puts the guns down long enough to actually learn his letters and sounds)..... Already he can beat me at a game of Jenga (which I am pretty sure says more about my poor Jenga skills than it says about him) and he knows how to smooth talk his way in and out of anything. (Like the time he came into the kitchen and asked: "Mom, you know why I always kiss you and hug you?"
"Why's that Solly?" I asked back.
"Because I loooove you," he said. Then there was a slight pause as he handed me Liam's iPad. "Can you enter Liam's passcode for me?"......Sigh.
It's like butter.)

Solomon is quite the little guy, full of energy, curiosity and loads of love. He's already putting himself out there as the ladies' man, has a crush on a little girl in his class, whom he has declared his heart to, and his favorite place is still in my way, er, I mean, in my lap, layering me in hugs and kisses. He's a mama's boy to be sure (which is only annoying half the time) and he is of his own (read: stubborn) mind. He is certainly our kid on every level.

So, the day before his fifth birthday, he declared:
"Mom, I know what my name should be," as if he had been working on this for years and had finally come up with the right answer.
"Oh really? What should your name be?" I curiously wanted to know.
"Steve Rogers," he answered emphatically. "It is the best name, a good name, and I would like to be called Steve Rogers from now on."

Thank you, Captain America! Not only do you save the world repeatedly while acting as eye candy to an entire generation of women, but you have now solved the problem of what we should have named our son from the get go. (It's like he has some faint, subconscious memory of having been unnamed for the first few days of his life and the drama that seemed to unfold at the announcement of his given name. You can read that post here.)

Anyway, Solly turned 5, and then Liam turned 8 last week and now February has snuck up on us, as if we were in a rush to get somewhere. Slow down, Father Time, if not just for a moment, so that I can etch into memory these days that arrive too soon and are gone as quick. 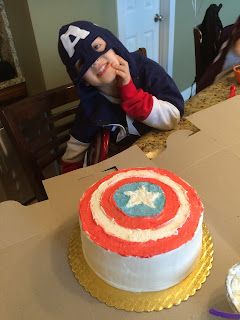 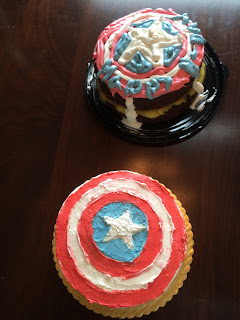 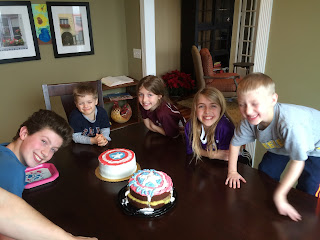 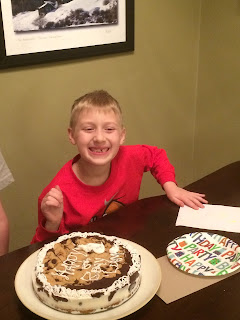