Why We Don't Have a Baby Vole

Great question. Why don't we have a baby vole?

There I was, running along, when Kurt called with important and pressing life decisions like whether or not to buy a really good but expensive tractor for our new farm home....(uh, yes....really not sure why he thought he had to ask me this question.) And since I was all, 'Yes, yes, yes, whatever you think best, how could we pass up such a great deal on a tractor, yes' and so on and so forth, I thought it would be the perfect time to turn around and ask my own really important question:

Me: Ok, so now that we have that decided, would it be okay if I brought home a baby vole?

Him: (slight pause) No. (He didn't say it very emphatically but I am certain I heard the tone going that direction.)

Me: Oh good, then I chose correctly and did the right thing by putting it back.

Ok, let me back up. Solly and I were on a run around the lake when out popped the cutest darn baby vole ever seen! (Did I mention how cute it was?) Ok, so, it really didn't pop out of anywhere.....more like struggled to move across the path and I nearly squished it.

"Solly, dump out your Popchips and give me that bowl!" I said, coming to a screeching and swerving halt, almost giddy about what I almost ran over.

"No," he said, because apparently Kurt has already bribed him: ("Solly, if your mother ever asks you to give up your bowl so that she can bring home wild animals, just say no and I will give you a lollipop.")

After he finished his Popchips, he handed me the bowl anyway (so there Kurt! plbbbbbbb!) and I scooped up Baby Vo.

Ever seen a vole in a bowl? (I swear this has Dr. Seuss written all over it!) No? Well then, it's your lucky day! 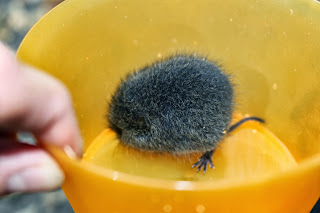 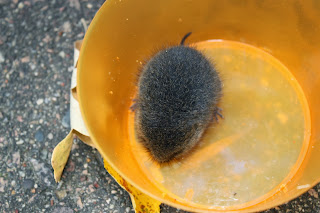 And yes, Baby Vo is as soft as the ball of gray cotton it appears to be! After I pet it oh so gently, and then let Solly do the same (minus the gentle part), I had to make the toughest decision of the day: Take it or leave it. Argh!

I could hear the voice of reason in my head telling me how much the other kids would LOVE to see this little guy and that it was only fair and seriously, do you even WANT to be the coolest Mom around or are you just completely clueless because THIS IS YOUR ONE AND ONLY CHANCE?!?!

But, then I heard Kurt's voice, literally, telling me no, I shouldn't do that.

So, Solomon and I found the perfect little spot to let Baby Vo go and then, after a sweet goodbye (that included me saving the voles life yet again, this time from the hands of a two year old) off we went.....but half way around the lake, I had a sudden moment of doubt and we ran right back around to where we left the little guy and spent 20 minutes looking for him. (Yes, I do in fact have a teensy tiny time management problem.)

After finding him again, curled up on a leaf, snorting his little nose around in the ground, I managed to convince myself that I had made the right decision the first time and we should really let him go now before I talked myself out of leaving him there. He appeared to agree because as soon as we left his side he scooted his way under a big leaf as if to say, 'See? I'm hiding now. You can't find me so go away.'

Baby Voles are so cute when they play peek-a-boo.

And in case you ever run across a baby vole on your own and decide to make a different (BETTER) decision, here is a great chat board on baby vole care I found where you can learn how to care for them until they are old enough to survive on their own (unlike us, who just left it to die.....seriously, how do we live with ourselves! My rational side said, 'Take it, take it, help it grow up and teach it to survive in this cruel world' but no.....he's probably freezing his little vole haunches off as I type if he hasn't already been found and eaten......poor thing.....maybe we should go back for it tomorrow.....)

And that is why we don't have a baby vole.

But clearly, we should.