Letter to a Fellow Driver

"So turn it on, turn it up, and sing a long
This is real; this is your life in a song
Just like a road that takes you home
Yeah this is right where you belong
This is country music." --Brad Paisley, This is Country Music

Dear Ticked-Off Driver (who couldn't control the primitive urge to give me the finger the other day),

You may not know this but it was in fact a RED LIGHT at which I stopped. It had ceased being yellow long before I arrived at the turn and therefore I did the only logical thing, I stopped. Furthermore, while it is true there was nothing coming from the other direction, the law states I have to wait until the light changes to green BEFORE I make that left hand turn we were both eager to make. I am fairly certain you wouldn't want to pay the fine that coincides with breaking that law and get this, neither would I.

Now, had you been behind me the day before and decided to let your birds loose, I would have completely understood. You see, I was driving my little children home from dance when I came upon an intersection with all lights flashing red. So I stopped. And absentmindedly, I sat there singing country music with the radio blaring well above my melodic mistakes....and we waited and waited and waited and you'll never guess, but that light NEVER CHANGED to GREEN! And before long I had about seven other cars waiting patiently behind me. And man, they were being very patient because I didn't hear any honking (over my blaring music, windows up and heat running high) but when that big ol' semi-truck pulled up next to me and had the audacity to start pulling out to turn left on a red....(Oh Crap! That light is a FLASHING light!) I started moving, not having any clue where we were in the traffic pattern but figuring that semi made a great shield. I certainly would have understood the birds flying the coop then. (Perhaps you were sent to me as the universe's delayed reaction?)

And I would also even have understood it if you were, let's say, my seven week old son who freaked out today when I used a cold wipe on his bum to which I told him in the sweetest of cooing voices, "Some mommies are really nice and have wipes in warming containers so that they are toasty and comfy on their baby's skin. But since we believe in tough love, just suck it up." (I'm sure I'll regret that remark at 2 a.m when he takes me up on it....) And though the urge is primitive and quite universal at that, bird flipping is apparently a learned behavior that my baby has not yet acquired.

All this to say, if you are going to let your birdies out of their cages, at least have good cause. Oh and just so you know, driving without either hand on the wheel is certainly not how I would do it, but then that's just me and obviously I have been wrong before!

Here's a highway salute right back at ya! 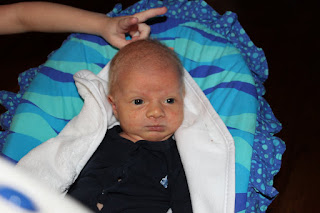 Oh, my bad, those are bunny ears....unless of course you happen to be British....

Good luck to you,
The Graceful Chicken
Posted by karen diane at 6:01 PM