The remarkable thing is that it is the crowded life that is most easily remembered. A life full of turns, achievements, disappointments, surprises, and crises is a life full of landmarks. The empty life has even its few details blurred, and cannot be remembered with certainty. -Eric Hoffer, American writer

Hmmm, odd, because I'm pretty sure we are full of all of those things yet I can't even remember what I had for breakfast, much less what has happened outside of this blog!

Speaking of a life full of landmarks, like most parents we know, we have sent out a birth announcement for each child. (They are landmarks, right?) Solomon was afforded the same treatment and since we had not sent out Christmas Cards in 2010 because we knew we'd be sending a birth announcement soon thereafter, we opted to add a little letter to say as much. I asked Kurt what he wanted the family letter to say and he told me whatever I came up with would be fine (so he thought). So, I wrote what I wanted to say and then thought, gee, that sounds an awful lot like a blog post. I emailed it to Kurt looking for feedback and he agreed, it sounded like my blogs (I suppose that's what they call writers voice) and he had thought we would be saying something more along the lines of "Hope you had a Merry Christmas" and such. But then I got to thinking, he originally said to send whatever I wanted so at least half of those we know received the he said/she said version as follows:

Life is full of surprises. Embrace them.

At this time last year, I participated in a class at church about journaling one’s faith. Yesterday, I happened to run across my notes from one of the sessions in which we answered the question: When do I feel alive? We were told to list all the things that make us feel fully alive. I am guessing I had to resist the urge to chuckle and write ‘when I breathe’ or ‘whenever I’m awake.’ None-the-less, my list included ordinary things such as ‘being outside, running, and hiking in the mountains’ and then listed things like ‘when I am acutely aware of God’s presence in a particular moment’ and ‘when inspiration hits, the creative juices turn on and the writing (or music) simply flows out of me.’ At the very end of my list I wrote the solitary word BIRTH and then I apparently went over it again and again with my pen because it stands out big and bold compared to everything else I listed. Now, had I been in the audience watching the movie of my life at that moment, I might have recognized that particular still frame for what it was: foreshadowing! For here I am, a year later, feeling VERY MUCH ALIVE!

Somewhere between the kids’ homework and gymnastics, soccer and ice skating, Aidan’s drum lessons and Boy Scouts, Madeline’s dance, Lily’s playdates, Liams’s speech and development classes, my teaching (violin and piano), writing and church groups and Kurt’s running his own business, we managed to find an extra twenty minutes to go have a baby, fortunately in the hospital! And we are so blessed. Our life is often busy and hectic but it is also full: of love, of laughter and of life, and of course a few surprises here and there. And we wouldn’t have it any other way.

This year, may you recognize that which makes you feel fully alive and embrace it. (And might I suggest you include ‘winning the lottery’ in bold on your list!)

Much love to you all,

We apologize for not getting our Christmas cards out earlier but we hope you had a Merry Christmas and Happy New Year! 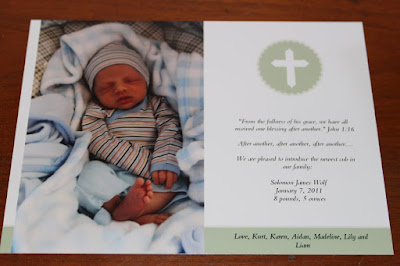 And I'm almost done sending these out...Matter of fact, I've got an expected "done sending" date of Christmas ....2015.

Gotta set those expectations high from the get go, right? ;)
Posted by karen diane at 11:57 AM