God Talk, Steelers and other such things....

"Are you there God? It's me Margaret." --From Judy Blume's book by the same name.

While my mom was here recently, we overheard the following conversation between the two girls:

Madeline asked Lily, "Do you know where God is? He's in your heart."

"Well, he is everywhere, but mostly he is in your heart," Madeline told her.

"Well, he is in my brain," Lily said back a little louder. "And he's in my mouth too, wanna see?" she asked. "AAAAAAAAAAAAAAAAAAAAAaaaaaa! Can you see him? Look closer.....Aaaaaaaaaa!"

Then, a few days later in the car, I heard the girls calling, "God! GOOOOOOD! Where are you? I can't hear you...what do you want to say to me? Goooood!? God?"

"Lily, Madeline, God usually doesn't talk in a big, loud voice so you have to be still and quiet and then you might hear what God says. But it will most likely be a tiny whisper in your heart," I explained.

I look in the review mirror and both girls had their chins pressed tightly to their chests.

Madeline, using the deepest, slowest voice she could muster, and chin still touching her chest, said. "Are you in there God? We're listening....Goooood?! We can't get any closer but we still don't hear you...."

That's when Lily started yelling at Madeline (chin still to chest) to stop talking so loud because she wouldn't be able to hear what God had to say.

I think they may struggle with the "quiet" part...and probably the "still" part too come to think of it.

We were driving home from school the other day when I noticed two police cars with lights flashing. They were running some sort of speed trap and had caught a couple cars.

"Look kids, police cars! And they're giving out tickets," I said as we got closer.

Matt, the carpool kid spoke up: "My dad, he's a good driver. He doesn't get in crashes and he doesn't get tickets."

There was a slight pause before Lily proudly replied: "My dad's not...he runs red lights."

So I just have to say, poor Steelers! (And yes, I admit it...it is all my fault they lost the Super Bowl tonight! I ran out of white frosting when making the Peanut Butter and Chocolate Covered Rice Krispie Treat Footballs and well, I didn't feel like going to the store for a third time so I made do with blue and red and yellow instead....my bad.) Actually, I am giving credit for the loss to our quarterback. And not for the reasons most people are giving him credit. You see, he is not exactly the sharpest tool in the toolbox, nor the brightest star in the galaxy, and I think he was thinking he could get a sizable deduction on his taxes for giving away the game. He was probably thinking, "Wow, we have LOTS of Super Bowl rings and they have very few so let's share the wealth and then claim it as a charitable donation." Idiot.

But at the very least, we have the cutest fans. 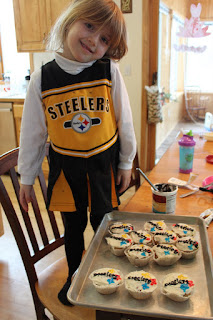 And there's always next year! Maybe God will decide to loudly shack up inside OUR players next time so we won't go home holding our chins to our chests: "Are you there God? It's us, the Steelers!"