Note to my dear readers (or should that be singular: reader?): Due to our upcoming move, all the way across the street, Graceful Chicken blog activity (among other things) may suffer. Of course, if you are reading solely because you like self-inflicted torture, your brain may be pleasantly surprised to know posts may be infrequent these next few weeks. Then again, I may find every opportunity NOT to pack and this may become a blogging boom for me (doubtful...).
At any rate, I only have one little story to relate this week (mainly because I spent the week ignoring the kids...kidding...they just weren't funny, hee hee). Yesterday, the girls REALLY wanted to go to the park so that Madeline could "practice pumping" on the swing. So, I gathered up the girls, put on their helmets, got them on their bicycles, stuck Liam in the backpack carrier (which he could very well fit in until he is old enough to drive!) and we headed down the street to the little park.
After taking FOREVER to walk to quarter mile and cross the somewhat busy street to get to the park, Kurt called me to ask me if I was ready to come home as he had made the dough and it was ready to be made into pizzas; a Friday night event in our house. So, we packed back up and started home. Lily was struggling to ride her tricycle, partly because she paused every time she saw an ant, or piece of grass, or for no reason at all, and partly because she had gotten a thorn stuck in her foot that she would not allow me to touch, so I pushed her on ahead and told her we would follow behind. She actually started peddling and was about half way to the busy street when Madeline yelled:
"Liiiilllly! Stop!.......Liiiiiiiiilllllllly! STOOOOOOOP!" (Lily doesn't need too much reason to stop mind you but since Madeline was saying it she seemed to find humor in doing the opposite.)
And then, talking really fast, Madeline tried reasoning with her sister:  "If you ride into the street you might get hit by a car! If you get smooshed you might die and then YOU WILL MISS!     WATCHING!     THE!    MOVIE!    LIIIIIIIIIILY!     STOOOOOOP! YOU DON'T WANT TO MISS THE MOVIE!"
Hmmmm, maybe we need to work on priorities....
And now for the most recent, hen-heart-warming moment: 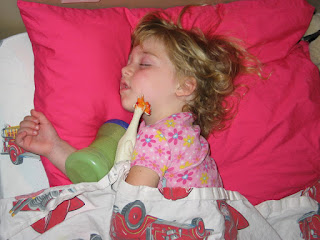 It's always nice to see the chicks getting along but I must admit, I fail to see the cuddliness of a rubber chicken!
Posted by karen diane at 7:48 AM