The Problem With Frizz

On PBSkids.org, there used to be a story called, "The Problem with Chickens." In the story, the chickens all started acting like humans, doing all the things the ladies in town did, until it became a real problem.
In our house, it's kind of the other way around really....but right now we are focused on "The Problem with Frizz."
You see, we have had issues with Lily's hair. A while back, Madeline, in an act of utter irritation, yanked out a HUGE clump of Lily's hair. Ever since, we have had this problem with frizz.
Over Super Bowl weekend, we decided to try cutting her hair (again) in attempt to calm the madness. This is what happened: 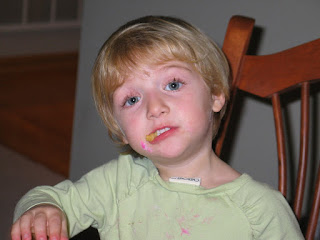 It's not bad, just super um, bowl-ish....
But, what we noticed is, the frizz, although shorter, is still very much alive and well. So, my mom suggested we try what my brother does with his little girl. After bath each night, they put in anti-frizz stuff, comb her hair, let it dry and she is frizz-free in the morning. We dutifully tried that last night and here is what we got: 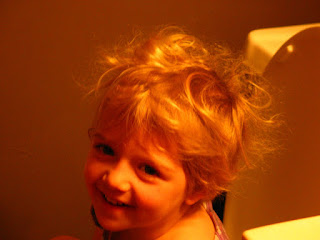 Or from a different angle: 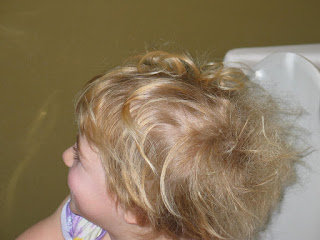 I can't tell if it just didn't work or if this is just her first of many bad-hair days....
Posted by karen diane at 5:31 AM