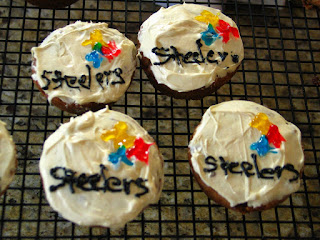 . -Kool & the Gang
Steelers 27; Cardinals 23; Liam 1!
WOO HOO! Go Steelers! (And Liam!)
Last weekend was a weekend for celebrating in our house. Saturday, Liam turned one. And because we want to encourage him to embrace his true heritage, we wanted to go with a HUGE party involving a magic ring and lots of fireworks. But, since our budget didn't allow it, we gave him second breakfast and elevenses instead.
Seriously though, we made some pretty poor cupcakes, which he didn't seem to think much of and which were quite terrible compared to what we would make for the Super Bowl: 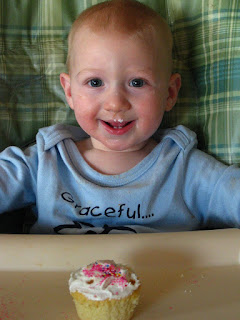 And then we pulled him around outside on his sled, which he apparently loved: 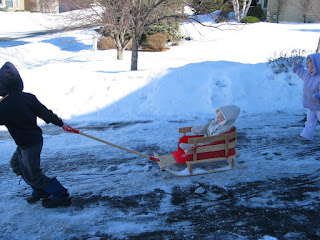 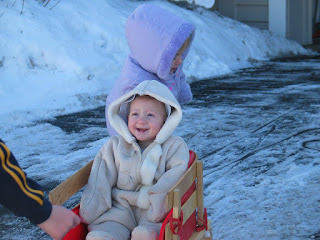 And that was about it, other than a gift or two that people sent from afar and that his siblings took great delight in opening on their own. Turning one is a much different experience as a forth child than it is as a first child. Looking on the bright side though, his birthday fell on a weekend which meant NO SHOTS! Woo hoo!
The next day was Super Bowl Sunday. As we sat watching the game, almost bored for a second or two, our kids were down in the basement enjoying a movie. They came up around half-time and after giving them one last pre-bedtime Super Bowl snack.... 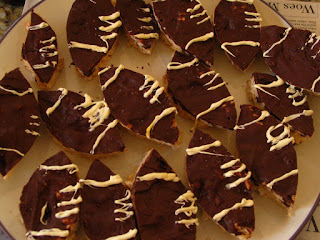 I rushed to get them all bathed and put up for the night. (Aidan got to stay up since he is the most interested in actually watching and has the ability to stay quiet, sometimes.)
So when Fitzgerald caught the pass that lead to a touchdown that put Arizona in the lead, our house broke into utter chaos. Well, technically, Kurt broke into utter chaos (putting it nicely) and he retreated down to the basement where the expletives could spew forth unnoticed, kind of.
After quickly apologizing to our guest, a long time friend of Kurt's, I scooted Aidan upstairs, aiming for a very rapid bedtime routine. "Is daddy angry?" he asked.
Angry....hnmmmm, now let me see. That might sort of describe the beginnings of what he was feeling....another way to put it is that he wanted TO DIE! I am fairly certain he would have very much liked someone to just go ahead and put him out of his misery.
As it turns out, football has the potential to actually make people a wee bit crazy. And by 'wee bit' I mean completely and totally out of their minds! It causes grown men to strip off their Steelers jersey because every time they wear it, the Steelers lose! (And we all know it is because of the jersey.) It makes other grown men go outside and re-enter the house, because every time they do so, it seems like the Steelers have a great play. It makes grown women watch the entire end of the game upstairs because certainly it was her going up that caused the Steelers to get back on track to win....and there's no way she'd come back down as she refuses to be responsible for the downfall of the team AND the decline of her husband's mental state!
Football is a nut-producing sport....where there is football, there are nuts. And lots of them....(hee hee hee.)
But of course, in the end, it was all worth it: Kurt taking off that shirt, Brooks heading outside in the cold so that he could come back in and jump start an incredible drive at the end, and me, watching from the nose-bleed seat upstairs while assuring our son his daddy would be okay....as long as we won.
Go Steelers!
Oh, and Happy Birthday Little Liam!
Posted by karen diane at 6:15 AM