So, we are apparently either drawn to wildlife in our backyard or we attract it, I am not sure which.  Last week, Lily was excited to watch a HUGE rabbit running around out back. It was really amazing to watch it actually play with a squirrel, hopping around in the snow (ring-around-the-rosie perhaps?) and eat at our frozen bushes.
Then, a few days later,  we were sitting there at lunch and Madeline yells: "Look! A Coyote!"
Thinking she was teasing, my mother-in-law and I looked outside and sure enough, we saw this: 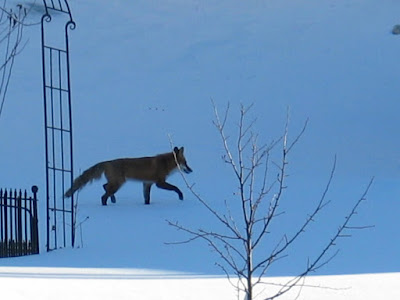 Granted, it is not a coyote but a fox, and from the looks of him, he hunts well. I hope our furry rabbit friend is on the look-out because he certainly seemed like he could very well have been on a mission. And ever since my mom replied to this picture with an email about the danger of rabid foxes, I have had images of children being rushed to the ER with the fox STILL ATTACHED screaming "Swiper, no swiping! Swiper, no swiping!"
Then later, inside our house we realized there is nothing to worry about with this super hero around: 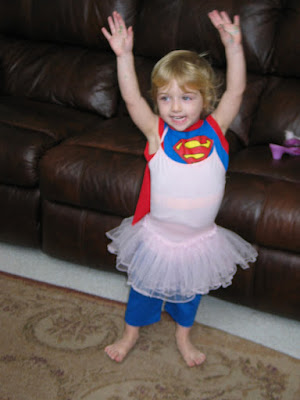 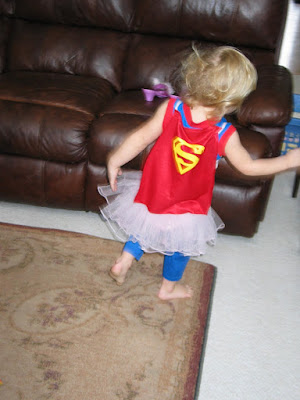 I'm putting my money on Lily (with a possibility of the 5-shot series of Rabies Vaccine of course....)
Posted by karen diane at 10:04 AM