The graceful part, from what I understand, was not my Grandma’s fall. No, I am guessing that was pretty similar to the chicken-like fall I took years ago that resulted in the title of this blog. What was truly graceful was the way in which GG so peacefully sat in the doorway, all movie-star like, waiting for someone to come help her. Fortunately, Warren the Third (cousin) was on his way over and found her sitting, full of grace, ready for him to call 911 so that the hospital limo could pick her up and take her to the overnight spa….well, a girl can dream right?
And I know that she TRULY appreciated me coming in and taking pictures of her after she had been there for three days, un-done-up, as you might say here in the south. 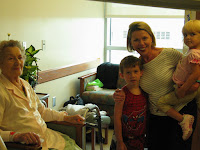 GG, Aidan, DiDi and Madeline
And for sure, the hospital staff thought terrific thoughts of me and my 2 kids as we walked out with four latex chickens, courtesy of their Grandpa. But seriously, with all those latex gloves hanging there on the wall, who could possibly resist blowing a few of them up? 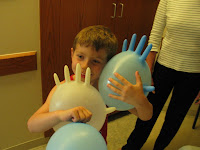 I am surprised you don’t see a dozen or so clucking through the hospital at any given time.
Anyway, it has been a week of accidents. First there was GG’s fall, which brought us back over to Polk County for the second time this trip. There’s really nothing too funny about an almost 90 year old falling but I will report that she has had a partial hip replacement since the incident and seems to be doing fairly well.
Then there was Madeline’s enthusiastic leap toward Liam, who happened to be laying next to the ancient coffee table in GG's house. Well, Madeline, having dove head first (is there any other way?) came to understand one of the laws of physics very quickly. I am extremely surprised her forehead didn’t take the opportunity to burst open and do a little red dance for us on the floor while simultaneously dying her hair pink, but she lucked out and is only sporting a pretty, colorful little knot under her overgrown bangs. (And she accessorized later with another lovely bruise under her chin. I think it might be a knock-off Dolce and Gabbana.) 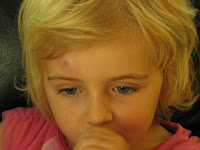 Finally, this afternoon’s incident took the prize for most ridiculous: the girls had done something that required me to chase them down in order to dish out some consequence or another but, as I rounded the corner to the front room, my head hit the corner of the wall (apparently I needed a physics refresher course myself) and I went down.... down.... down (whoa-uh whoa-uh whoa, duh duh, duh duh duhduhduhduhduhduh…) to the floor, straight into Child’s Pose, for you yoga buffs. As I slowly thought about picking myself up, I noted that the pain coming from my head seemed quite disproportionate to the accident and that’s when I realized that I was wearing one of my headbands.
Now, in order to fully understand what that means, you must first understand that this particular headband has been compared to a pirana due to the incredibly large number of tiny teeth that are supposed to grip it to your head. 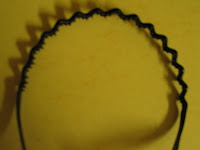 Secondly, you have to know that when I first bought it, Kurt said to me: “Man, that looks like it could hurt.” And of course I snickered because “it’s not like I am going to hit my head or anything”…DOH. Long story short, it gave me several tiny little puncture wounds that bled heartily and stung like the dickens. Fortunately, I thought it was so funny that I could hardly help but laugh…I mean, who put that corner there anyway? (Sneaky kids...)
And there you have yet another Graceful Like a Chicken moment.
Posted by karen diane at 6:44 PM