The Truth Behind Loss... and Life

You may remember, a few years back, we lost a beloved friend, Wahletha. She was like another granny to our kids and her husband Marv remains dear to us to this day. That was a tough time: smack dab in the middle of my last pregnancy, emotions already soaring. When I think back to those weeks and months, my heart still holds a thousand bricks. I can almost touch the sobs still lingering inside.

Our daughter Lily has been asking for years to go to visit Wally's grave. Before we moved away from MN, she asked a dozen times, always met with some poor excuse: it's snowing, raining, sleeting, too cold, too hot....but really, it was just too hard. I wasn't sure how the kids would do at the gravesite. I wasn't sure how I would do recalling those memories, that sadness. 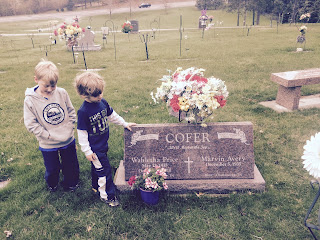 But then Fidgi died. And I learned that life is entirely too unpredictable and that you cannot put off the people you care about....not even once they are gone.

Fidgi was my high school soccer coach. He was young and charming and incredibly talented at a time where youthful energy and extreme competence made a huge and lasting impression. Every girl on that team was captivated by his smile and good humor, his wit and his wisdom. Every girl on that team was changed in some way or another, challenged, beyond our years, to visualize our life being shaped by hard work that paid off in droves; a life of success, of hope and happiness. We were the team who had to fight the school board to keep him as a coach; they were more concerned with rules and regulations (I mean, seriously, how hard is it to overlook the lack of a proper Greencard anyway?!) than they were with the success of girls' sports. It was when I first learned that, in life, certain people have to follow the rules down to a T and certain others have to fight the system, because sometimes "the rules" aren't truly in our best interest. (It started young, folks....)

Fidgi had a way about him that made us want to be in his presence, want to work hard, want to succeed, and not just for ourselves. He inspired us to love and care for one another when most of us were more concerned about which party we were going to that weekend and who might be there. He brought the best out of us. He challenged us, not just to be the best soccer players we could be, but to be the best people we could be. He taught us about soccer, about fitness and nutrition, health and vitality, about relationships and life. He showed us what it meant to find balance: between work and play, and all things in between. And he made sure we didn't take ourselves or each other too seriously, that we could laugh at ourselves and be silly, even when the going got tough.

And then one day, just a few weeks ago, he died.

How could it be that this man, who singlehandedly changed the course I took in my life, was dead before I ever had the chance to really thank him? Instead of dedicating my time and talents solely to music and pushing towards that singular focus, he encouraged me to also focus on my game, to work harder on and off the field. He praised me for my determination, for the time spent in the gym getting stronger, for the hours spent running to increase my endurance, for the extra shots and touches after practice, the way I transformed my diet and focused on my health. He lifted me (as well as others) up in front of peers as the teammate to emulate: a hard working role model, one who was trying to help the entire team both on and off the field. (Seriously, how could you not love a man who made you feel glorified?!) And I think he truly meant it. And so I carried that with me into college, into life.....continued making good decisions, even when they were tough to make, stayed aware of my health, of what I put in my body, of how I treated it as well as the wellbeing of those around me. I could meet any challenge because I was taught to believe in my self, in my ability to control outcomes; because I was taught the benefit of hard work and determination, because I was taught right living in a world where so many things could push you off track. And because I was taught to work with others and to care about those around me, I always found support when I needed it most.

Because of this one coach, I believed I could walk on to a Division 1 team, run marathons, push myself to run a Boston Qualifier and run Boston.....and it flowed into other parts of my life.....into my music, into my relationships.....and I believed in my ability to share these passions and wisdom with others, to become someone else's teacher, and mentor and Coach. Because of his influence, my life was effectively transformed. And yet, I never got to tell him how much he shaped me.

Thankfully, their memories and lessons live on. Fidgi taught many of us about life and in the end, his death is that lesson we probably already knew but perhaps have chosen to ignore: that we should never assume that tomorrow is guaranteed. Because it isn't. Not for any of us. This earthly life that we hold so dear is fleeting and my guess is that Fidgi would also challenge us with the question: So what are you going to do about it? (Only, he would use his endearing accent and end with that sly, all-knowing, smile and we would melt under the weight of its truth and think that we were his favorite people on earth simply because he cared.....he had a lot of favorites I believe.)

So, thank you dear readers for continuing with me along this journey. Thanks for sharing in the ups and downs; for laughing with me, and crying with me. This is life. 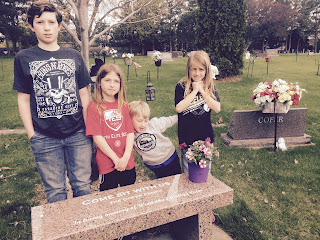 Imperfect, painful, and fleeting.....and yet so incredibly beautiful.