After a week of beautiful, warm, Spring-like weather, our Chicken Coop arrived. In the snow. 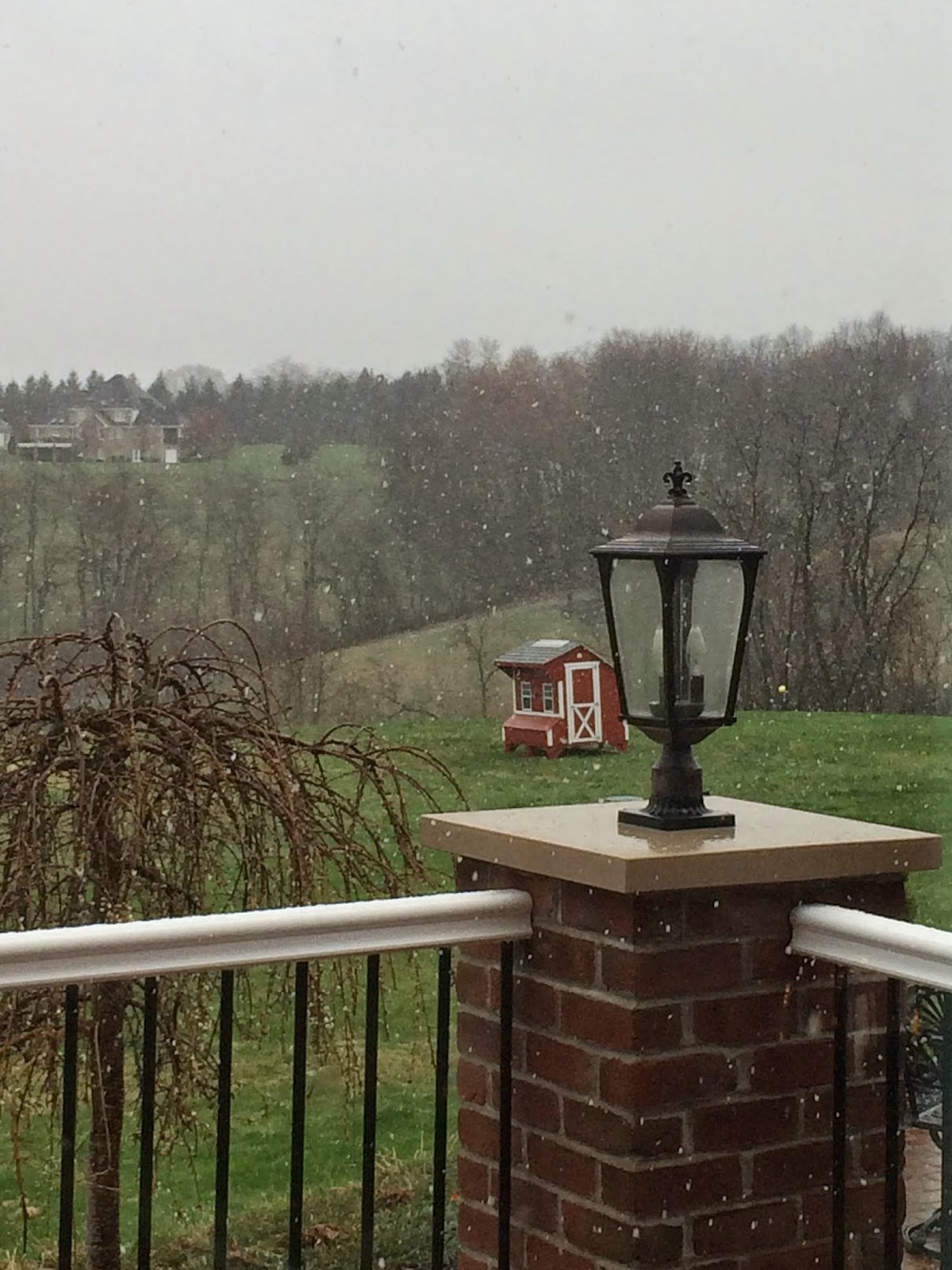 I only mention this because the snow meant we couldn't move the teenage chicks into the coop (because I had no intention of risking the lives of my girls whom we had so carefully and successfully kept alive for almost 4 weeks at that point…..or maybe just because I had no intention of going out in the snow to prep it for the chicks….because I hadn't bought the stuff we needed yet….so sue me!) Why does this even matter you ask? Because the following day, my mom arrived to take care of the kids while Kurt and I went to Boston for the marathon. And the chickens were all in the guest bathroom. So, during her first visit to our new home she shared a bathroom with a dozen, scroungy-looking hope-to-be hens. She said she didn't mind because, and I quote, "It makes for a better story." As if we needed any help... But it got better, I assure you.


At any rate, after a few days of orienting my mom to the area, Kurt and I made our journey to Boston. I will save that story for another post however because it was certainly an adventure (in crazy-land) and one I will never do again….just like last year.

But the real reason I am writing is to say that had you told me 20 years ago that one day I would be dabbing Preparation H on a little chicken's vent in order to keep it from getting pecked to death by its own flock, I would have uncomfortably laughed, made a mental note to avoid any kind of interaction with you EVER AGAIN and then gone and asked someone if a chicken vent is white meat or dark meat.

So, there I am, showing my mom everything we do to take care of the chicks, when I was all, "Oh, while we are at it, could you help me catch that little runt over there (her name is Carmella) so we can cover her rear end in Preparation H?"

I'm an awesome hostess. Seriously. I put Martha Stuart to shame. She should take some lessons. Perhaps she'd like to borrow a hen-roiding chicken or something. Oh, and you should totally visit. Really. It will be a blast. I promise!

And here's the beauty of it, without really asking me any questions, my faithful mom dutifully helped me catch Carmella and held her still so I could wipe ointment all over her little derriere. That's a true mom for ya. (Here mom, can you help me hide this body? Sure sweetheart. Where would you like to put it?)

I have heard it said that females really start figuring themselves out in their mid-30s. Well apparently all these years I have been hiding a farmer inside. I had no idea. But now that she's out, I think it's going okay because I am pretty certain that only a real farmer lathers Prep-H on a chicken's prolapsed egg-chute…or maybe the real farmers just say 'sucks for them' while culling 'em and then prepping 'em for dinner. Later they sit around their barns laughing about that crazy yuppy up the street who actually puts Prep-H on a chicken's back-side.

You better believe Carmella is thankful she got the novice farmer. Tomorrow she may even get her own deluxe chicken coop since apparently fixing the duct problem wasn't enough to fix the "lowest hen in the pecking order" problem…….Humph! Teenagers!