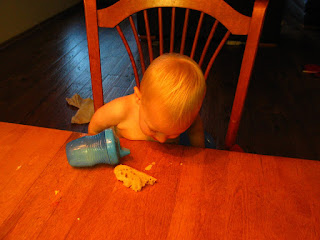 At first, when I saw him eating with his hands behind his back I laughed because it was as if he were practicing for a pie eating contest. But on second thought, it looked exactly like a chicken, pecking his feed off the ground. That's Liam, like a chicken.

Speaking of Liam, he was recently seen by a Pediatric Gastroenterologist for his growth issues. They basically took one glance at him, asked a few questions and told me there is nothing more to look at as far as they are concerned. "He doesn't look sick, he doesn't act sick, he's most likely not sick" was their basic assessment. That said, their expert opinion was that he needs more calories so they gave me a handout with High-Calorie, High Protein food ideas to try to beef up his growth a little. It included things like eating fried foods, rather than baked, adding cake frosting to bagels and dipping fruit in marshmallow cream. That lucky little devil! Anyway, being a bit on the health-nut-ish side myself, I have to admit he will probably wither into nothingness before I start adding cool whip to his sandwiches.

This week, the school system's early childhood specialists finished up their assessments of Liam as well. We met a few days ago so that they could give me the evaluation.

"So, we have found that Liam basically qualifies for all of our special ed services," she said. "I basically found that he is below the curve in all areas of Social skills and development."

"Hmmm, Liam is behind in social behavior? You will have to explain. I mean, he is always interacting with everyone, always makes eye contact and does things so that others will interact back with him as well," I said.

"Well, it isn't just social skills but adaptive behavior too," she explained. "For example, when I pointed to some socks on the couch and told Liam to look at the socks he looked at them and smiled; but when I told him to go get the socks and bring them to me, he laughed but didn't go get them." (Sounds about right...) "We like to see them follow commands."

Holding back a little snicker, I answered, "Hmmm, sounds a little like ALL my kids but ok, I see what you mean."

She continued, "And also, we would like him to be a little bit more organized in his play."

"Rrrright, organized. Perhaps you can work with my other kids on that skill, too," I joked.

"Gotcha," I said, holding back my amusement. I mean, I don't want to bite the hand that feeds me or anything but really? Organized? Perhaps the play to Liam IS in the taking out and putting back. And as far as I can tell, that would make him super organized because after all, he is making it very easy to clean up and put away! What a good kid!

Then we got to the Physical Therapist and the motor skills section of his evaluation. Ironically, if it weren't for his delays everywhere else, the PT wouldn't even be able to come help him with his lack of walking, the very issue we had him evaluated for in the first place! Apparently, his fine motor skills are so good that it offset the fact that he isn't walking and thus, he passed the motor skills evaluation. But of course, because he isn't walking and he qualifies for services from the speech therapist and early childhood specialist, the PT can come as well. All for free. And if he lags behind just a tiny bit for the next year he will then qualify for FREE preschool and even busing to and from preschool! Woo hoo! Go Liam! (Something about cheering for that just doesn't seem quite right.) But really, free preschool! Woo hoo!

Finally, they asked me:

"As part of our write up, we need to know what your goals are," she said.

"Really, for some reason, I'm not very worried about all this," I said. "I mean quite honestly, if it weren't for all the other people worrying about it, I probably wouldn't have had him assessed in the first place, although, I am certainly glad we did. So, I guess we just want him to get caught up to his peer group and maybe you can give us some ideas of what we can do on our own to help him in that pursuit."

And then, they said the thing any mom of four is thrilled to hear:

"Well, we will be giving you all sorts of ideas, like pulling pillows off the couch and having him climb over them, and moving furniture around for him to walk between, so don't think we are just trying to totally destroy your tidy house but it may feel that way with all the things we will want to do...."

I stopped listening because WOO HOO! I have permission to let the house go! I can hear the conversations now:

(Kurt) "Um, Karen, why does the house look like a tornado hit?"

(Me) "Oh silly husband! It isn't that I didn't clean today but you know how those early childhood specialists are; this is what will help Liam! It's all for Liam's sake, really it is!"

Up next week: Neurology! Woo hoo!

Have a Happy Halloween. Be safe and watch out for those chickens crossing the road! 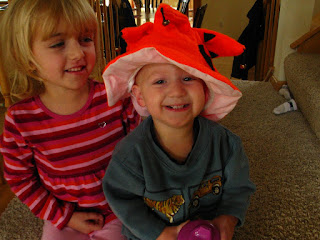