Personal space is important to the chicken. It requires open space in which to roam. If confined they can become aggressive with a tendency to pick on each other. A low ranking hen may be cornered and cannibalized. -Cycle of Power: Animal Totems
Um, that sucks. I suppose it's a good thing Lily can fend for herself....
So someone asked me the other day about Aidan's birthday. I wrote about Madeline's and Lily's and Liam's birthdays, why not Aidan's? Duh, he didn't make the cut, obviously. No, really I just didn't get to it. (It wasn't even that I was offended that he wanted to wear his new Extreme Sport Helmet when riding in the car....I have mentioned how smart he is right?...While the girls sometimes throw their hands up in the air and yell as if on a roller coaster ride, Aidan pads up, just in case....I can only imagine how much fun Liam must be having watching all this on the way to the store....)
His 6th birthday party, back in mid-February, was supposed to be a sledding party. But we had our first real "melt" (as they call it here when the snow starts melting away) and basically there was no snow to sled on. So, we made a homemade snowman pinata, a bunch of little people came over to play, enjoyed destroying our work of art, had cake and ice cream, and then we looked at the clock and realized there was an entire hour left. Kurt and I looked at each other and said, "Uh-oh, now what?" We made it through with the help of our 15 year old friend and everyone seemed to have a good time. Not much to it really.
Then we let Aidan open his gifts, mostly sent from relatives afar: a snow bike, razor scooter, helmet, Bionacles and whatever else. He was very pleased. And then a few days later in the mail came the gift of all gifts: Bendaroos! "The amazing, flexible building sticks! Bendawhat? Bendawho? Bendaroos!" Unfortunately, my kids have inherited my insane desire to own anything in an infomercial and when they saw this on TV, they HAD to have it. And like a good mom, wanting to live vicariously through her children's As Seen On TV products (that's normal right?), I asked grandma to send the Bendaroos. Seriously, how could you NOT want Bendaroos when you see this commercial?! (They are super cool...really.)
Anyway, here are the pictures for those who want proof that we really did make our own pinata. The only issue we had is that I stuck the carrot nose in a few days earlier than I should and it kind of wilted (duh) but other than that, he was pretty great for a first try, if I do say so myself (which I do.) 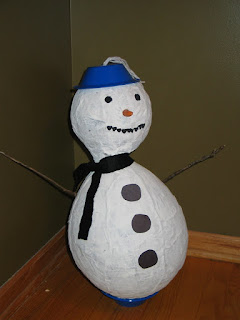 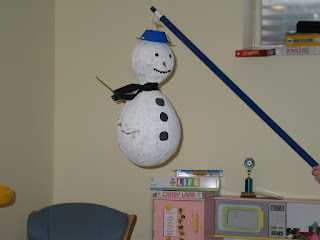 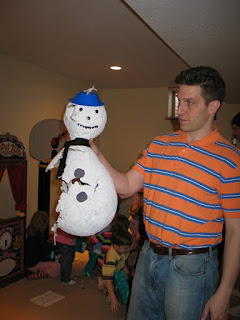 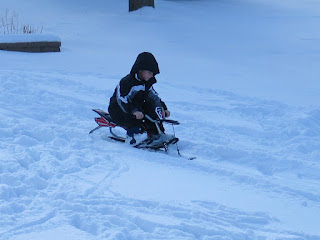 And somehow, even though he thinks the helmet is about as cool as the bike, he managed to ride the bike the first time WITHOUT the safety helmet. Fortunately, he was going so slow, it would only have mattered if a car had accidentally plowed through the yard and hit him....and then I guess it wouldn't really have mattered...and no mom, that won't really happen....we are hundreds of yards from the street, plenty of open space in which to roam so that the chickens don't pick on each other, well, at least not to death....
Bendawhat? Bendawho? Bendaroos!