We have a book called "No More Chores" that is one of the kids favorite short, rhyming reads. It is about a mother hen who tells her chicks it is time to clean up and they beg her to make it fun for them. They fling toys into the wagon and give all the toys a ride to the chest and then they work in the garden, weeding and watering, and at the very end the mother hen pulls out a nice big treat from the oven. And everyone is happy. The end.
That's exactly how cleaning is at our house. Late at night. While I am sleeping....dreaming sweet dreams of peaceful, willing children who pick up their things on their own accord while I sit in the kitchen with a good book drinking my ice water while it is still cold for once. And that's usually when the ghost-like blob enters the room and scares us all away and I can't find my kids and I startle awake with my heart pounding out of my chest, sweat on my brow and my senses, on overdrive, have me all freaked out with those little house-noises so I can't sleep anymore. Oh, and there is no treat. The end.
Anyway, I can hardly miss the opportunity to write about Halloween. Before we got moving that day, I had to clean up the house. I opted to go for the stick-the-kids-in-their-room-while-I-get-it-done-real-fast approach (no fun and games or treats...or whining....or ghost-like-blobs...) We then loaded up the car to head to the costume parade at Aidan's school which would have taken half the time had Aidan not completely melted down upon failing to get the feet of his costume to stay in the right place before getting in the car....or had Madeline not flipped when I made her take off the Snow Princess dress so that she could fit into her car seat...or had Lily been willing to get out of the dirt (I wasn't even thinking costume with her....she had her pink pants on inside out and backwards, was covered in soil and as a dear friend said, looked a bit on the homeless side...) I may have declared a religious boycott and called off Halloween for our family entirely had it not been for Liam, dressed in his little
reindeer outfit and smiling happily away.
We arrived at the school where I shuffled the kids into Sugar Pies Bakery and I ran into the dry cleaners. The man at the register looked at me, dressed up in my witches hat and outfit and said, "What are you dressed up as?"
"Um, a witch?" I said, questioningly. Seriously, how did the big, black pointy hat not give that away???
Back at the bakery, Lily tells the owner, Tami, "Hey, that's my mom.....that witch." And off she runs, on all fours, barking loudly, because she had finally gotten her puppy costume on and well, that's what they do.
After the parade, we headed to the store for the pumpkin carving set. If you have never bought one of these sets, they are terrific! They turn the average Joe into the Michelangelo of pumpkin carvers....that is assuming you don't break one of the little saws...half way through the first of four pumpkins....and then break the second little saw while accidentally cutting off the cat's tail in the second pumpkin...and then, after throwing your arms in the air, you reach for the big ol' kitchen knife, cut a few triangles and make an old-school jack-o'-lantern which ALL THE KIDS SAY THEY LOVE THE BEST! (Why did I bother with the scull and cross bones again?)
But, here are the pics we took on Halloween. Enjoy. 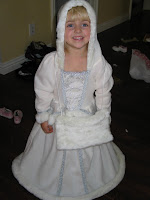 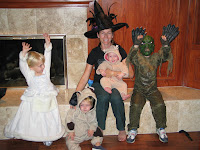 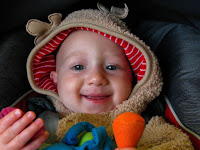 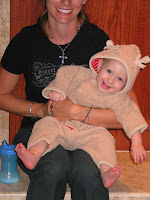 Why some people shouldn't be given the camera....
or "Look kids, no head!" 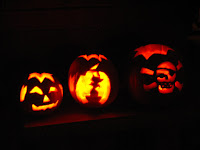 The cat (in the middle) is obviously a manx...recently it's head caved in as well...
Posted by karen diane at 7:48 PM