Fit: A sudden outburst of emotion...or what comes over Madeline anytime Aidan looks at her, or gets too close to her, or suggests that he may do any of these things in the next century, or worse yet, LOOKS OUT HER WINDOW!

A few weeks ago, my brother-in-law came to visit for a week or so while the three brothers went on a brother trip, driving all over the west coast to see the band Rush: 6 concerts, 9 days. (Go ahead...I'd be silently judging them too if I hadn't already said it all out loud....)
Anyway, Owl, as our kids affectionately refer to him, is now in the running for the Most-Helpful-House-Guest-of-the-Year award and given how much company we have in a typical year, this is an honor I am certain he would stick up on his office wall...you know, between his Harvard diploma and his Medical degree. I can seriously understand why one might hire daily help, even if they couldn't really afford it...I might go without a meal or two (a day!) as well if I had someone doing the dishes, folding the clothes, watching the kids and offering medical support on a regular basis (See Owl? You didn't need to go to med-school; you'd have made a top-notch housekeeper....or grandma...)
At any rate, while Zizi Owl was here, he consumed more milk than all three of my older kids combined. Granted, Madeline prefers soy milk and Aidan only uses milk to coat his bowl of sugar, I mean, cereal, in the morning. But still...it is impressive to watch a grown man put down that much milk everyday. (We might even consider renting a milking-cow next time he comes out.) At one point, Aidan asked why he drank milk and Owl explained the health benefits, and Aidan must have heard something like this: "blah blah blah, biggest and strongest ever, blah blah, stronger than God, blah blah blah..." because within a week of Owl's departure Aidan started pouring himself a glass of milk first thing in the morning. (He is also the kid who not only asked for but ate an entire plate of raw spinach after watching Popeye.) This small act of positive role-modeling would surely have won Owl the Distinguished House Guest award had Aidan not come up to me the other day and said, "Mom, you want to know why I am the biggest and strongest?"
"Why's that, Aidan?"
"Because I am drinking milk," he said.
"That's great, Aidan," I replied.
"Yeah, that's why Madeline gets even more hurt when I do bad stuff to her now."
Ah. Perhaps next time, Dr. Owl needs to be a little more specific about what we use our big, strong, milk muscles for. That way I'm not left to clean up the chicken fit: 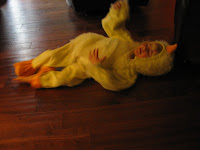