That Time Mom Bought a Sloth

So here's the thing: I don't think anyone walks into a store with the intention of buying a pet sloth. Is it a LIVE pet sloth you ask? Well, of course not. I'm not crazy! (Wait, can you get a live one somewhere?)

But, sometimes things happen. And while it had been less than a week since Kurt told me we needed to cut back on our spending, there I was with this unfortunate dilemma. I really needed to buy a sloth. I couldn't explain it. Don't ask me why. It was definitely impulsive but once strapped into my car, I knew it was the right thing to do with that $20. (Some people might think it is questionable that I am being told to cut back on spending when clearly I make very good choices....hee hee.....apparently those people do not know me AT ALL!)

In my defense, I don't shop at Walmart if I can help it and when I do, I don't usually let my eyes wander to the big bargain bins of fun things. And I usually am not talking to my soccer team manager while doing those two things and wouldn't then mention the hilarity of the gigantic Llama stuffed animal that 'I am sure I need to get for my daughter Lily.....and oh look! A Smiling Sloth!' I blame my manager for telling me her daughter would love the sloth....because now I have one. In my car.

At any rate, here is Sloth strapped in. 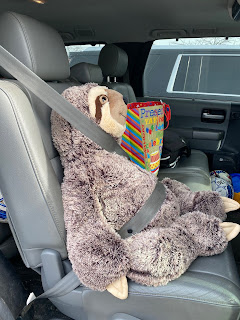 Seriously. Something's very wrong with me. But look how happy he is! 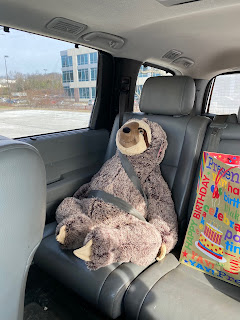 So I picked up the girls from the bus stop that day.

"No. Better if you don't. But, oh, you are giving a Sloth to your little sister, Leah, by the way." (They are in a mentorship program with my soccer teams and Leah is their little sis. It justifies everything.)

Anyway, they know me pretty well, so they snickered a bit, and I am pretty sure there may have been some eye rolling action going on, but they knew to leave it alone.

A little later, I went to the elementary school to pick up Solomon. He got into the car and there was this silent pause before he closed the door. Then I looked in my rearview mirror and saw him glaring at Sloth. The next thing I know, he is beating the snot out of Sloth with his book bag!

"Solly! Why are you beating up my pet Sloth?!" I intensely asked.

"Because.... HE STOLE MY SEAT!" Solly yelled back.

Later that night, a coaching friend texted me a bit upset because a basketball parent had become belligerent with him at his Futsal practice, called him arrogant, told him soccer did not belong on a basketball court, among other things.

"Want me to stick Sloth on him?" I texted back, hoping to lighten up the situation.

"No, the parent would probably just call him lazy," he said.

"Well," I replied, "Sloth's been sitting in the same damn seat ALL DAY! He IS lazy!"

I probably need to work on my empathy skills.

Meanwhile, Liam knew nothing about Sloth. He had been picked up and dropped off in my car several times during the day, but had been in and out of the front seat and never looked back. We were on the way to school and running a bit late the next morning when I came to a quick stop and commented, "Hopefully my pet Sloth doesn't fall out of his seat."

Liam looked at me confused as he struggled to get his seatbelt on.

"Are you calling me a Sloth?" he questioned.

"Um, no. I am referring to my pet Sloth," I said, pointing to the back seat.

Liam turned around and immediately started belly laughing like I have never heard from him. He was so tickled he could hardly contain it.

Solly, quietly sitting next to Sloth, was not amused.

"Yes, it really is!" Liam snorted.

"No, he is REALLY ANNOYING!" Solomon exclaimed. "Why do we even have to have him IN THE CAR?!"

"Well," I said calmly. "I could hide him in your bed as a little surprise if you'd rather."

"Well then I will just put him outside your bedroom door before you wake up and see how YOU like it!" Solly exclaimed.

"You are right. That would probably startle me....Sloth would definitely make me jump first thing in the morning," I admitted.

"Mom, why can't you take me to school first? I might be late now!" Solly asked once he got a hold of himself.

"Just tell your teacher Sloth made you late," I told him.

"That may be more true, but it is WAY more interesting if you tell her it was your pet sloth!"

"Still annoying," he said before getting out of the car, a half smile still planted on his face.

"Have a great day, Solly!" I yelled back.

It's about making memories y'all!

I heard a quote recently that resonated with me. It went something like this:
"Now I know, my life will not make me happy but happiness will make my life."

And that is why I bought the happiest Sloth ever.....