To Where Does Time Fly?

I try to listen but anymore, the rush of words spewing from the mouths of my kids seems to get jumbled in my already crowded brain and the best I can do is stare at them blankly. Sometimes I nod.

"Lily, I am so sorry. I couldn't concentrate on all of those words. Could you repeat it?"

"Oh, I totally get that!" she says honestly. "So, I read this at school and it is really funny:
Friends are like snowflakes.....
If you pee on them, they go away."

The humor snaps me back to the present and I glance over at Lily. We laugh for a very long time.

How did it get to be summer break already? These last few weeks and months have flown by yet in the getting here, their heels were dragging! Or maybe those were mine.

For months I fretted over the impending decade change that I experienced on this year's birthday.....I lost my way, found it again, lost it, stopped bothering to look for it.....but found it anyway when I stopped freaking out and realized that the monster at the end of the book was just me....still me.....fury, lovable old Grover Graceful Chicken. (With an emphasis on the old now I guess.)

Where did the time fly off to anyway?

Playing soccer against a high schooler recently, he was unable to take me on 1v1. He had been smack talking the other boys all day so I said, "Hey, how does it feel to be beat by a lady old enough to be your mother?"

It was really funny at the time but when I pause to think about the truth behind it, I'm stumped. How did I get to be the adult around here? I pondered this question as I helped cut Solomon's fingernails yesterday. He was complaining that it hurt and Lily told him: Well, THAT'S why I do my own! I flashed back to conversations with my grandparents about how to cut and file your own fingernails. I must have been about 5th grade and my grandparents were taking me out to lunch I think. I don't know why it was just the three of us but the moment still stands vividly in my memory. My grandpa thought we were still talking about using the nail file properly but grandma and I had changed the subject to the best way to cut your dominant hand's fingernails, yet there he was, chiming in: "I just hold it still like this and move my other hand back and forth across it like this."

Grandma and I took one look at each other and burst into giggles.

Grandma is 98 now and Grandpa has been gone for over twenty years. And somehow, someone thought it was a good idea to put ME in charge! I mean, for real y'all. I still laugh over 'friends being like snowflakes because they both go away if you pee on them'......that's who's running this show! (At least in part....)

The absurdity of it struck home last week when I emptied out Solomon's school backpack. 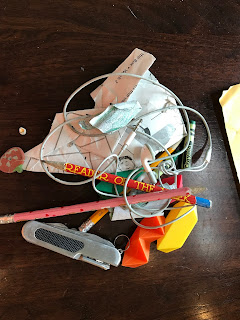 Look closely......what doesn't belong? Ding ding ding! That Leatherman knife/tool combo probably doesn't belong in the kindergarten classroom. But this adult in the room? She did not even know she was missing one!

"Solly, you can't take knives into school buddy," I told him, withholding my chuckles as best I could.

"No, Solomon. They will expel you from school if you take in a knife. Do you know what that means?" I asked. He shook his head no.

"It means you wouldn't be able to go back to school anymore," I declared.

There was a pause before he slyly responded: "Really......hmmmmm."

The wheels are a'turnin'. I want to tell him, "Hold on to this moment, Solly, because someday, someone is going to get the bright idea to make you the responsible adult in the room and...." OH! MY! GOOD! LORD!

You have all been warned!