You might wonder how the above lyrics relate to my five year old child (unless you know him, then you are nodding your head: Yup, sounds about right.)

To be totally truthful, Solly has been having a tough time "adjusting" to Kindergarten. It's not like we didn't see this coming, I mean, after all, I warned the new, incoming principal over the summer about this kid. I even called out, "Good luck with that!" as I dropped him off on day one......and every day since. (And then hopped the curb as I rush out of that parking lot with a crazed look on my face!)

And it doesn't help that they gave him the novice teacher; the one they brought in from the middle school who has had ZERO experience working with 5 year olds. Her initial emails were full of frilly hope and excitement; about how she was so fond of sitting on the floor with her grandchildren, quietly reading books, doing puzzles, creating cherished memories. (GAAAAAAG me now before I shoot myself!!)

We knew from the start that she was in trouble. The rose colored glasses were blinding her to the stark reality that this was a room full of boorish monsters! And this one Solomonster in particular, whose main goal in life outside of completely ignoring anything she might have to say, is to cause her daily heartache and sorrow.

Before I paint a horribly negative picture of our little beast, please know, he is a super sweet child. He loves warm hugs, kissing (bordering on creepy), being held tight while sitting crawling around in laps and being read to.....and adventures.....and excitement......and super heroes......and total and utter destruction.....

So, the first "Yellow Card" came home (on week one) kindly informing us that Solomon was talking too much. We all laughed because "Oh my Gosh! It could be SOOOO much worse!" We patted him on the back and told him to be quieter and listen more. But really, we were secretly relieved. Oh, talking. No real harm in talking......

And the Yellow Cards rolled in every week or so: too much talking. And we smiled, feeling like our little card carrying NRA murderous devil, the kid who recently asked what body parts we didn't need, which ones we could "just get rid of", was at least under control in the classroom.

But as the Mafia might have it, put one monster with another and all of a sudden, there's a pair of them......and then an entire clan......and Solomafia Boss hooked up with "another kid who is a bad influence" according to his teacher at his conference (Really? Are you SURE it isn't the other way around???.... This was the same conference she compared him to her son.......who was expelled in ninth grade......and is now in jail.) First impressions are a B!%$H.

One thing led to another and this week we received his first red card (and subsequently our first trip to the principal's office.) 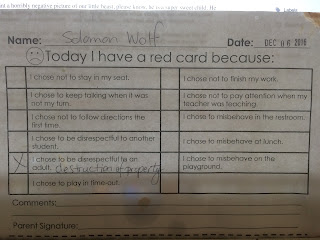 The principal, who is apparently trying to qualify for an early Sainthood later this year, spoke softly and kindly to Solomon, explaining that he was not mad but that it was not okay to rip down the classroom decor and tear it up with his buddy. Solomon sat, almost abashedly, in my lap, arms around my neck, unable to even look at the principal. We told him we knew he could do better and we don't want him to make a habit of seeing the principal in his office. I hugged him, told him to be on his best behavior and sent him on his way.

That afternoon, Solly came home with this: 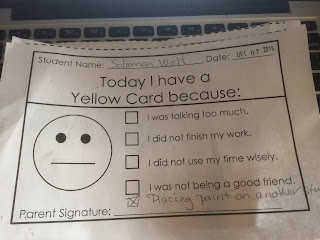 Sigh. So, he went from destroying to creating. Perhaps the pendulum swung a little too far.....but really, "placing paint on another student?" As in, art class? At least he wasn't flinging it right? And holy smokes, HE WAS PARTICIPATING! This time last year, he wouldn't even sit through an art class at school, let alone, "place paint" on anything!

The next day, he came home with yet another one: 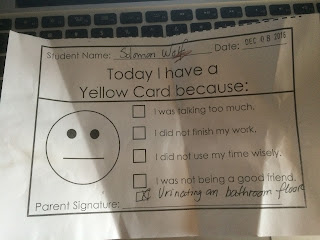 I'll admit I am running out of excuses here but, hey, at least he bothered going into the bathroom right? I mean, my biggest worry before he started school was whether he would bother using the restroom at all and opt instead to just go outside at recess! I even warned the principal. But look! He made it to the bathroom! Bonus points!

OK, ok, I am not trying to make light of this. As I dropped him off on Friday, before meeting with the principal for the second time of the week, (which means he has been to the principal's office more in one week than any of our kids COMBINED in all the years they have been in school!), I reminded Solly of his behavior, of listening and following directions. Short of pleading, I just hugged him and then noticed the police officer standing by.

"Solly, I know! Why don't you tell the Police Officer that you will try harder to behave in your classroom?! Go ahead! Tell him!"

Solly looked at me as if I had lost it, a big grin spread across his face as he replied: "Nah, I'm not gonna do that!"

The amused Police Officer chimed in: "Well now, maybe I should walk you to your class."

And THAT is how he got his first police escort.

"Get used to it, Kid!" I called out. The Officer at least has a good sense of humor.

After meeting with Solomon's Principal (God Bless Him) I immediately drove to the girls' school where Lily was to read her D.A.R.E. essay in front of the entire 5th grade, the Sheriff, the Chief of Police, the School Superintendent, State Reps, the District Attorney and other such important people.
As she got up to read, I noticed Solomon's principal sitting behind us. He has a daughter in 5th grade as well.

"My uncle went to prison and my cousin died because of drugs," she began. Attention granted by all.

I shook my head. At the very least, it encourages some perspective from Solly's principal, after all, it's all relative.

That evening, Kurt asked Solly what color he ended up on today, expecting him to finally have a green day, for which we could go overboard congratulating him.

He looked at me, head cocked in contemplation. "Yup!" he finally exclaimed.

"I don't actually remember," he said, which was probably the honest-to-God truth.

Later, Kurt and I were discussing what to do with this situation when Solomon came up singing from the basement.

"I got a little drunk last night," he sang. "Somethin' bout a midnight rain...."

I simply poured another glass of wine. (So sue me!) I'd ask what's next but something tells me it won't be long before we find out. At the very least, he is a creative little bugger.....I mean, rarely does she get to mark an ACTUAL box on those cards.....

Way to keep her on her toes, Solomontosaurus!