If you know me well, you probably know I have "Time-Management Issues" (which I like to think of as a symptom of being an optimist.....I am just so sure I can get those dozen things done before I have to be wherever it is I am going next.)

Well, believe it or not, summer went by in a blink of an eye. And as we were nearing the first day of school, trying to keep Madeline's anxiety at bay while the other kids excitedly prepared, I didn't really manage the time like I might have had I really believed school was actually going to start on the 31st.

As it turns out, the school district was not kidding about the start date and so the night before, I scrambled to figure out what the kids would need, and if we even had those things since my one futile attempt at back-to-school shopping was met with a Target that was mostly out of stock on all the essentials. (And then I forgot to get to Staples to finish collecting supplies......because in my mind, there was still plenty of time left, Summer! Way to ruin a perfectly good dream! Sheesh.)

Aidan was the last to go to bed since, like his mom, he struggles with time management issues as well and was trying to finish up his summer reading project. At 10:00 p.m. I told him he needed to pack up his backpack and go to bed. He emptied his backpack (from last year, still full of cookie crumbs and other assorted gross stuff) and asked which folders and binders he needed. I went through the list. I had only managed to find 2 of the right colored folders (for PE and Computers); not exactly a gold-star moment. I did get excited when I saw I had gotten the black binder needed for math but then quickly remembered that, oh yeah, his math class is at the high school so this middle school list does not apply for that class.....(I made him take it anyway because it's better to have something than nothing.....assuming we are not talking about diseases.....then nothing is pretty darn great!)

Anyway, Aidan was up by 5 a.m. working on his assignment and was out the door early to catch the bus. (One down, four to go.)

Madeline was up by 6:15, almost an hour early but was too excited to go back to sleep. (Given her nerves over the past couple of weeks, we were just happy to see her smiling and ready to go.)

Lily awoke, already in her school clothes (that she wore to bed, as is her norm) and quickly got to work making her lunch.

Liam kept an ongoing count down to let us know how much time we had before the bus arrived.....his nerves getting more and more edgy as the clock ticked away. (Think: FOUR ALARM FIRE when there was only 20 minutes left!)

Needless-to-say, with all we have going on, I felt a huge sense of relief when I sent these three off: 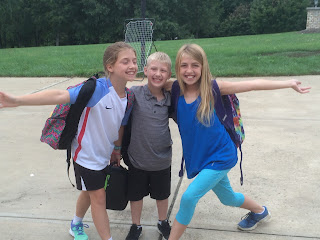 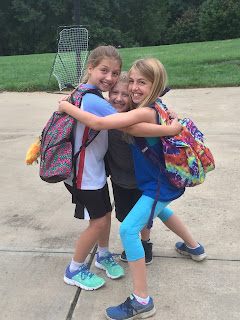 Then there was one.....one kid to get to school.

Solly started Kindergarten this year. Our district only offers half day (because they hate us) and so I signed him up for afternoon as it is one less kid to get ready in the wee small hours of morning.

Solly was excited about starting Kindergarten but he definitely had some reservations as the morning went on. (I also had some reservations because they put him in a class with a teacher who used to teach middle school reading lab and has ZERO experience with Kindergartners. She is a grandma and "loves children, loves reading to them, doing puzzles with them, playing games" but when I met her, I got the feeling that, in her rosy colored world, she had no idea what it would be like to have a classroom full of Solomons.....and I put my money on Solomon breaking her.....give it a month.)

After reading a random email from his teacher the night before, I realized she had given out a supply list at the orientation night (that I happened to miss since almost everything that happens in the district is Tuesday or Thursday evenings when I coach.) At any rate, I wrote the teacher, requesting the list and she wrote me this lovely email, apologizing for the unnecessary stress this must have caused me. I chuckled. There are many things that cause me stress but whether or not Solomon has a pencil box on the first day of school is certainly not one of them. (Whether he chooses to keep his clothes on at recess or pee in the bushes instead of using the bathroom, well, those may be on my list.....)

As we were driving home from Staples with his supplies (and his Starbucks lunch of champions: chips, chocolate chip cookie and chocolate milk......because I am mother-of-the century here.....) I got a call from our neighbor whose 5th child (of 7) is also starting Kindergarten. She wanted to know if I knew what time school started for the boys.

I drove Solly to school at what seemed like a reasonable drop off time (12:30) and pulled up in front where there was an enormously LONG LINE of parents and kids waiting to go inside. There was ONE CAR in the actual car line and I hesitated. I must have missed the memo saying we were supposed to walk our kids in and seriously, why are all these parents doing that? I called my neighbor. Is this normal? While I had no intention of parking and walking in, wasting 20 precious minutes of this three hour block of FREEDOM, I felt this slight pang of guilt......She assured me Solly was independent enough to go it alone.

I watched as the little girl in the car in front of me got out and stood in the back of the line all by herself. I felt another wave of guilt.

"Solly," I said, turning around to look at him square in the eyes. "You are going to go into the school like a big boy, all by yourself, show all those other kids how it is supposed to be done, ok?"

"Great. You go on out there then and have a fantastic first day."

He gave me a kiss and got out of the car, heading toward the wrong door. I rolled down my window:
"Solly! You have to get in the line and go through THAT door," I hollered, pointing at the line and then the door.

He took one look at the ridiculous line, looked back at me with a daring glance and then ran through the grass, behind the trees, avoiding the line completely and stealthily snuck in the door behind the teacher who DIDN'T EVEN NOTICE HIM.

I guess he was dressed appropriately: 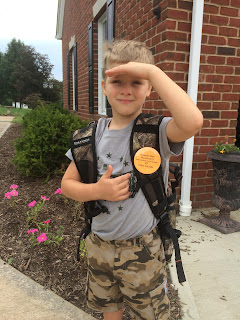 I will admit, I said a little prayer.....for the teacher and the entire school for that matter. They will need it.

(Day two he tried to climb out the truck window at drop off.....I had to explain to him that he really should use the doors at school.....so he pulled his backpack back in the car, opened the door and literally fell out in a heap on the ground....he got up grinning: "I'm ok!" and rushed away. Oh lord help them.....)