I am a little behind....the end of the school year is kind of like that.

This story takes place on Mother's Day. It was 6 p.m. and Kurt and Aidan had just come home from a two day swim meet in Chicago. Kurt was apologizing for having done nothing for Mother's Day (which isn't true at all since he did get me a card last year that apparently his brother picked out and that Kurt forgot to give me and so he saved it for this year, or something like that....and it was the perfect card, simple and funny. Thanks Al, I mean, Kurt!)

Anyway, I told him all I really wanted was to take a short little twenty minute run to relieve the stress of a very busy weekend parenting alone. And within about 10 seconds I was out the door, with half a mind to just keep running and running.....forever and ever....

But, fearing for the kids and the house and Kurt's sanity, I returned home. As I was freshening up in the bathroom I heard a scream and a brief moment of crying followed by silence. And then Madeline shouted:

So, up from basement came Madeline with Solly who was sporting a very bad, and very red, hair do. He was not crying anymore and so I took my time examining the somewhat small laceration.

"What happened?" we asked Madeline.

"Well, Solomon ran into a jump rope," she said hesitantly.

"Ok, and what is the rest of the story?" we asked.

Not wanting to spend the evening in the ER, I walked Solly over to my neighbor's house where both the husband and wife are doctors. They tried to tie his hair together over the cut. His fine, baby-like hair was uncooperative and stubbornly refused to stay knotted. (I made a mental note to shave it all off later. Stupid, useless hair.) I then asked if our dear friend Crazy Glue might do the trick and they both agreed it would probably be best to take him in for a staple or two. (Ugh. Doctors.)

So, I walked him back home and enthusiastically asked if he wanted to go on a car ride. He was so excited that when I turned the car on he exclaimed: "YAY! The car has gas!" (Tells you something about the reliability of my car starting.....)

At any rate, the hospital ER was the best ending to Mother's Day, which is a bit of an exaggeration but none the less, the ER was practically empty, they took us right in and Solomon was so calm; he never once even flinched. And really, it was very quiet and peaceful. So much so that I asked if we could just stay the night. They said no. I told them I would volunteer to scrub the bathrooms. Still no. So we went out for cupcakes instead. 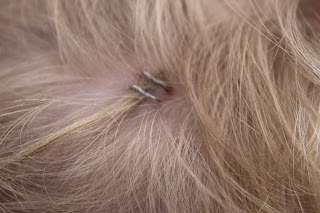 Nothing a good staple gun (and a cupcake or two) can't fix!