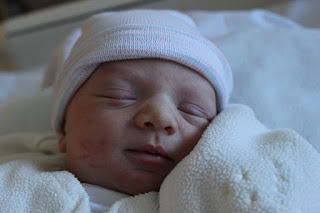 Disclaimer: Please forgive the writing in this post as my mind is not fully functional currently!

I had someone tell me recently that they thought I would blog my birthing experience, step by step, as I went through the process. I thought about it, I really did, but during the very brief time I was in labor, I must admit, blogging was the last thing on my mind. Then again, so was labor.

You see, Thursday night I made my first mistake ever (insert canned laughter): eating an entire bag of buttery popcorn on an empty stomach. I was up all night, tossing and turning with terrible indigestion which by early morning had turned into painful acid stomach. I ate my weight (pre-pregnancy of course) in Tums and drank Mylanta as if it were formulated from the fountain of youth, or at least contained the key to all great healing. I was in and out of bed all day Friday, exhausted from no sleep and having no energy from being unable to eat. These were lovely times.

At the same time I was dealing with that, I had the dilemma of whether or not to cancel the piano and violin recital I was hosting later that afternoon. While most sane people would have called it off, I thought of how difficult it had been to find a time that fit all my students' schedules and the fact that I would then have to reschedule for a later date. I thought of all the hard work my students had put in to prepare and even all the food and goodies I had already purchased. So, I did what anyone would do; I called my dad (who happens to be a doc) to see if there was a miracle drug I could take to help me get through it all. No such luck but he suggested I take something stronger than Tums and that certainly saved the day. By 4:00, my tummy stopped burning just in time for my students to arrive at 4:30. Also arriving around that time was a touch of lower back cramps....uh oh.

Once everyone arrived, I let them know we might have to be quick as it seemed labor might be imminent. Someone suggested putting a metronome on double tempo to get everyone to play a little faster. I wasn't too worried. I did take notice however that I was having contractions here and there. Nothing big but it kept me on my toes.

By 5:30, I was kicking everyone out and by 5:45 I was in a warm bath to see if the crampiness went away. Kurt was the voice of reason here since I was taking my jolly time and he urged me to call my friend over so we could go. With contractions 5 minutes apart, I decided he was right, we needed to get going. (Duh.) Right as I was exiting the bath, my water broke which was a little alarming since that has never happened outside a hospital for me before. No biggie though. We just got our stuff in the car, Deb arrived to watch the kids and we took off.

And we hit rush hour traffic....yay. Nothing like a little stop and go for a really good time! A little after 6:30, we were at the hospital. I found my way to the birthing floor while Kurt parked the car. I told the nurse this was my 5th baby and I was in labor. She took me by the arm and lead me to the nurses station where my doctor happened to be standing and the nurses took one look at me, told me they didn't need to triage and put me in my room. I was hooked up to monitors at 6:38.

Even then, I wasn't thinking we were about to have a baby. Certainly we had time for pain meds, right? Right??!

Not so much. The nurse checked me and I was already at 8 cm dilated. (I never in a million years would have thought I had gotten there already....seriously, the contractions weren't fun by any stretch but they weren't THAT bad...)

"Would you like an epidural?" she asked. I now know she was just playing nice. It's kind of like asking a child: Hey, you want some ice cream? Knowing full well they aren't getting any darned ice cream! But you gotta love a little dose of hope! It goes a long way.

Within a few minutes I was letting them know, in no uncertain terms, I was done. It was time. And it was. My body had already switched into crazy animal instinct mode and the pushing began. Two contractions and 5 pushes later, I was holding our newest addition. It was 7:02 p.m.

So far, we are all doing well. And thank goodness. Since Solomon's arrival, Liam has disowned me as his favorite mom, replacing me with whomever happens to visit next; the hospital "forgot" to inform the docs they had a circumcision to do ("but don't worry, you can just make an appointment to come to our office next week" because THAT is convenient!); my mom's flight got canceled, twice; the carpool parent who had planned on doing all the picking up this week for both Madeline and Aidan called to inform me all four of his kids have the chicken pox ("but I'd be happy to pick up your kids anyway....but they would be exposed to a germ fest in our van,"....hmmm, tough call, really, but I think I'll have to pass....); and to sugar coat it all, I twisted my knee last night while trying to sit down on the couch and was up all night in pain! Go figure: birthing a baby? No problem. Sitting down on a sofa? Bring on the ice packs and pain meds!

Truth be told, the most important event of the last few days so far outweighs life's little stumbling blocks, it is all worth it. Especially because in the midst of everything, we still have Lily who lightened things up today by telling me:

"Hey mom, maybe you can have another baby so that you can get us more of those graham crackers from the hospital."

She gets her financial sense from me apparently. But to be certain, we'll be heading to the grocery store very, very soon.
"Be at rest once more, O my soul, for the Lord has been good to you."
Psalm 116:7 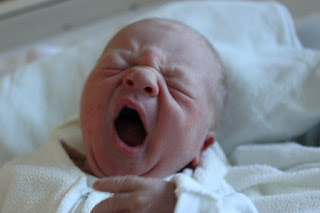