Ever been so far behind that you throw your hands in the air and think maybe it is just best if you start fresh...I mean, completely and totally walk away from the stuff that isn't done and just move forward?

That has been my life these last few weeks. My hands are up as I figure out if it is possible to simply wipe the slate clean and begin again (no). If only the house would go along with the reboot and find itself miraculously put back together again (it won't). Alas, that will be on my to-do list starting around 4 p.m. tomorrow, seeing as how, the day is mostly booked up until then (that was yesterday and now it is the day after....argh!). And why on earth are there over 1500 emails sitting in my in-box? The cyber-clutter is as bad as the paper stacking up in my kitchen. Ack! Anyone else ever feel this way??? Obviously this is a sign that it is time to clear up and clean out. And just in time too, for summer vacation is right around the corner! Woo hoo! Now, Solomon, go self-entertain for the next few days while I get this sorted out! Hmmm, why didn't that work?

At any rate, I have been trying to figure out how to post the four partially written blog posts sitting on deck without 1) finishing them and 2)....well, actually there's just one. I realized today I had only half finished the post on my New York trip from THREE WEEKS ago and I already had a post or two half written before that....making me feel like perhaps I oughta just jump ship now before I go down with the boat....or maybe the solution is to actually hit the "edit post" tab rather than the "new post" tab and finish what I have started. Or find my delete button and actually use it as needed! I am certain there must be a support group for this. And a reality show.

Speaking of, my birthday was Tuesday and I must say, had I not known better, I'd've sworn I was being filmed by some deranged reality show director. The day really started the night before while I was saying bedtime prayers with the girls. I glanced over and noticed Little Dot's time in our house had expired. (Didn't I call this one? Only, she lasted probably a week longer than I would have thought...Go Dot!)

"Madeline, your fish is dead," I announced, so coldly I appeared to be vying for this year's Mommy-Dearest award. She looked at me suspiciously. I think she thought I was kidding. "Look, it is floating belly up. I'm sorry. Let's take it to it's bathroom burial," I said, condolences lagging much too far behind the moment...but hey, I did get an "I'm sorry" in there, right? Apparently I missed compassion day in Mommy-School. I picked up the fish bowl and the girls followed me to the bathroom. Kurt walked in as I told Madeline, "Your fish, you flush," and dumped the fish into the toilet while saying a few words about her "little dot" of time with us. Madeline flushed the toilet and we watched Little Dot disappear. I took the bowl, changed the water and put it back in the girls room, telling them we could get a new fish the next day.

A few minutes later, Kurt and I heard Lily sobbing upstairs. And, because I also failed Sympathy Methods 101 in school, the only thing I thought to say was, "It's okay Lily. We can get a new fish tomorrow." This only increased the volume and duration of her sobs. I imagined her at my untimely funeral (God forbid) and Kurt telling her, "It's okay Lily, we can get you a new mommy tomorrow." Seeing that maybe I was not being as nurturing as I should be, I did a 180 and began telling her it's okay to be sad when you lose something you love. Little Dot was a good fish. We will all miss her (a half truth at best) and other such gentler things. It didn't make any difference. We assured her she could pick out and name the new fish, which she seemed happy about but kept crying anyway. I realized it didn't matter what I said. "Do you want to read a book?" I finally asked.

Tears miraculously dried up and the dead fish was all but forgotten as she eagerly pulled out a Clifford book. Riiiiight. She must get her grieving skills from the same place I got my sympathy skills. Thus began my birthday, a little early.

At around 4 a.m. I rolled over to pick up the baby from the bassinet and pulled my back out. Irritated, I tried to shrug it off as a symptom of getting older but then, my alarm clock didn't go off two hours later....well, technically it did but somehow the volume was turned off so it didn't actually do anything alarming. And then I realized oh, it's not that I am getting older, it's just that it is my birthday and Graceful Chickens have birthdays Graceful Chicken style.

We were then in a rush to get out the door and I must admit, I was super disappointed I didn't have time to go get my free birthday coffee at the local coffee shop like I had planned. After hurrying through the morning, I got the older kids to the bus stop just in the nick of time and took the younger kids to Liam's speech appointment only slightly behind schedule. As I was getting Solomon out of the car though, I missed the step to the curb and fell to the ground in a heap, catching the baby in his car seat on the way. Truly a scene I must say and one of those unexpected blessings as well because at some point in that fall my back shifted back into place. Yeeee-Haw! What a start!

The speech therapist, whom we love, didn't quite finish up early like I had requested but I rushed to the coffee house afterward to get my free LARGE drink before heading back to a play date I was hosting in which I rudely spent the first ten minutes cleaning up from breakfast and the last twenty entertaining a potty training Liam in the bathroom (during which he didn't actually go) while feeding Solomon at the same time. After sending our friends home, we were off again to retrieve Madeline and Matt, the carpool buddy, from school. Hyped up on caffeine because I had forgotten to tell the coffee shop I wanted a DECAF iced coffee, I got Matt home and was all but shaking by the time we got back to our house for lunch. At that point, Marv came by, bearing the gift of a scrumptious watermelon with a candle in it (he even lit it for me!) and we took him out back to show him his wonderful sand box all filled with sand and toys. Unfortunately, we had to rush him away as well because we had a gym appointment at 1 p.m. (the infant room requires a reservation). I was not about to miss the chance at working off the coffee drink and de-stressing from what seemed to be a crazy sort of day. Which was only half over.

After a great workout with a friend, I was back to the grind. Shower, Aidan pick-up, pizza ordering (since Kurt had inadvertently taken in the left overs I had been planning on heating up for dinner) and off to the pet store where Lily picked out a nice, friendly little female beta fish. Apparently the goldfish are only 29 cents for a reason. While other people we know seem to have no problem keeping them alive, the pet store owner suggested we go a different route. I don't know why we need another fish; after all, how could we possibly replace good ol' Little Dot? I do hear my folks chuckling though....

When we arrived at the pizza place, they told us their electricity had gone out. No pizza. Of course. But now you just have to laugh, right? I mean, go figure! Costco to the rescue. Kurt got us a big pizza (the only size they sell) and back home we went to celebrate before running off to Madeline's soccer game. The day ended well. Cake fixes everything don't ya think? That and the huge surprise gift of a new laptop computer! Woo hoo! I knew my computer was getting old when some of the letters started disappearing slightly, and the up arrow simply doesn't work and I have to convert every document that comes in because I have OLD software.  But I had no idea Kurt was going to replace it for me! Now, if only I could get my act together and get the new one set up before technology advances again. Aaaaah! Too late! 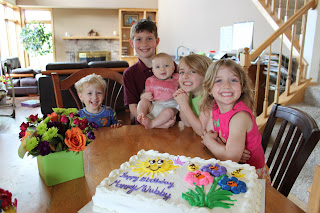 Anyway, here is the picture of the kids and my cake and some birthday flowers that arrived just at the right time to set things straight again! (You might recognize it as my B.Y.O.B. picture but I thought it was good enough to share twice. After all, this represents what all 34 years of my life have lead up to: Kids, Cake, and Flowers...it's enough to make anyone happy....and perhaps a little wrinkly....and grey, but who's counting?)

And if you think my birthday ended there, you are sadly mistaken because it's the weekend now and it is eighty degrees....IN OUR HOUSE! Air conditioner. Broken. Gads! Meeeelting are we......

I think I'll just go now....and stick my head in the refrigerator.....perhaps I'll eat some left over cake while there...of course, then I won't be just a little behind....hee hee hee.
Posted by karen diane at 4:30 PM