The night of the Subway adventure, I was awakened a little before 2:00 a.m. by a screaming Madeline:

"Moooooom! Lily is puking all over our room.....ALL OVER MY BED!"

I resisted the urge to pull the sheets over my head and ignore her panic and instead leapt up and grabbed my stash of cleaning supplies that, let's be honest, I think I keep just for this occasion.

When I arrived, I questioned why I had not gone with my first instinct and I dearly wished I still had on my blinders from the sub shop. My mind raced: didn't we JUST go through this a month or so ago? Doesn't that fulfill our quota for the year?

Lily, top-bunk sleeping Lily, had sure enough become what might be described as violently ill.....if by violent we are referring to a sudden, torrential attack of projectile vomiting. From the looks of the crime scene, she had been assaulted by the sudden onset of whatever tummy bug Solomon should have picked up from Subway's bathroom floor (again, EWWWW!). Pink, regurgitated berry smoothie was dripping from the top bunk, down onto Madeline's lower bunk, somehow hitting every step of the ladder as well and covering EVERY. LAST. THING. ON. THEIR. OFF-WHITE-CARPET! (Kurt might claim it is a light beige carpet but trust me, from the Contrast Art perspective of that moment, it was definitely closer to white!)

Madeline curled up outside her bedroom door, exhausted; Lily, a pale heap on the bathroom mat next to the sludge covered toilet, quietly shivered.

It took me a full hour to calm myself down clean up the disaster zone: half a bottle of Lysol, a full roll of paper towels, two full garbage bags of unrecoverable, drenched books, art work, notebooks, pens, pencils (and whatever else I angrily threw in there just because) and eight loads of laundry carefully rolled inward and piled up in front of the over worked machines.....why, oh why had they decided to leave all that clutter all over their floor? (And seriously, why couldn't it have been Solly, sleeping two feet from the bathroom door on the floor of his room? And finally, what's with my kids puking on each other?!)

At one point, after sticking in another load of soiled stuffed animals and sheets, I went into the guest bathroom to wash my hands and was met with this: 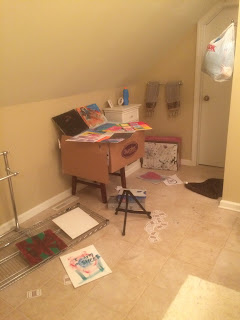 Not only was their room a ridiculous disaster, but they had infiltrated the guest bathroom which was now oozing creativity in the form of ONE. GIGANTIC. MESS! (I refrained from taking a picture of the paint-stained sink and overflowing trash......)

But then something caught my eye. Four simple words. 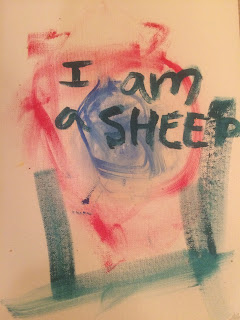 Oh dear Lord! Why can't I just be mad for one moment before you throw something back in my face?! For, if they are the sheep.....who is their shepherd? And if that is my call in this moment, for this season, how will I tend my flock? With anger? Resentment? Irritation?

Or will I follow The Way set before me, tending to them with love, compassion, and forgiveness?

(Honestly, Jesus didn't have kids that we know of and I can't recall any stories of him having to clean up the bodily fluids of anyone in the middle of the night while he really needed sleep and as far as I can tell, when he needed a break, he just climbed a mountain or entered a garden and told people to back off and they listened......I can't even use the toilet without interruption for crying out loud! But somehow, his example is supposed to apply here......so onward we push.)

I left the art room, silently finished the sanitizing and making of beds, gave Lily fresh clothes and covered her with a clean blanket. Then, I went back to the girls' closet, where I had angrily thrown Madeline's clean stuffed animals, and one by one I gently placed each animal back where it belonged so that they could be bearers of comfort to the one who loves them most.

I am a sheep. YOU are a sheep.

Let us also be good shepherds.
Posted by karen diane at 10:00 AM