My intentions never included writing every day during Lent. While that seems like a worthwhile goal, I knew it would set me up for failure. And unlike Atticus Finch in To Kill a Mockingbird who said "[Real courage is] when you know you're licked before you begin, but you begin anyway and see it through no matter what" sometimes I think there is value in realism above courage; in knowing when to attempt the impossible and when to refrain.

That said, I was hoping by now that the stillness and silence would allow me time to muster up more Lenten writings but all I could come up with was how sometimes this journey feels more like a nameless quest that haunts me.

I want to tell you of all my successes: the extra time I have been able to spend with the bunnies (did I mention our bunnies Morgan and Messi? They may have babies soon so I am CERTAIN you will hear more then!), the time with my chickens, playing the piano, cleaning the house, working with the dog.....those things I ought to have been doing anyway but winter got in my way! But then I remembered, the journey is NOT about me......and so I was stumped.

Then, early this morning, I went out to kill catch a rooster who would not shut up and I was met by this: 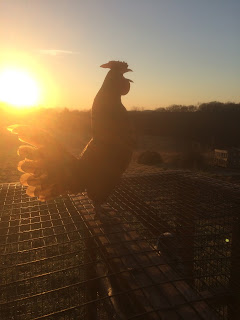 And I thought how funny it is that sometimes even those things that cause us the most irritation can be beautiful displays of creation. And, with the sunrise behind me as I began my day, my load was lightened. (And because of grace, the life of Sunrise, aptly named, was spared once again.) 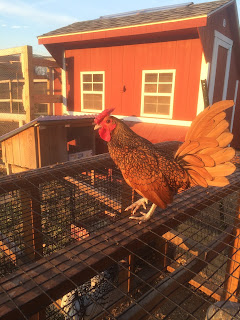