The Day the Chickens Started to Melt

Oh dear readers, don't go getting your tail feathers all bunched up (if you still have any left after being completely pecked to death by the other cooped up hens this winter....wait, that part comes later).....the chickens have not yet melted, not entirely.

What? You want to know how chickens "melt"? Well, dear readers, I thought you would never ask! (Which really wouldn't be a problem because I was going to tell you anyway!)

It is a well known fact, like a general rule of thumb, that one should never cross one's neighbors.....you see, the problem with attempting to stir up trouble for the "crazy chicken lady," as a neighbor so affectionately called me when texting her daughter but accidentally SENDING IT TO ME INSTEAD, (hee hee hee, which of course endeared me to her forever....your own fault, my friend....) the chicken loving neighbor might just decide that at every possible turn, she wants you to be aware of the hens living next door (or right in front of your kitchen window, as the case may be).

The Beginning (of Somewhere in the Middle) of the Story:

This winter has been a wee bit brutal. We have had a lot of, um, cold weather and quite a bit of this white fluffy stuff known as snow (which really means only that, yes, winter came again this year too....). It all seems rather normal to me really, coming from Minnesota, but according to everyone here and their mother, the last two winters have been quite abnormal. At any rate, we had a nice big snow storm the other day and the girls wanted to go outside to play in it, and like usual, they asked me to come along. So I debated it in my head for all of two milliseconds: laundry, dishes and toilet cleaning or sledding out back with the kids......(it's because I love the kids that the housework is not done Kurt, I swear!)

At any rate, Lily and Madeline are really good at rolling snow to make snowmen so they decided we should make another snowman to replace the one Aidan destroyed. I was excited about the opportunity to make some monstrosity, er, I mean, a ridiculously big, totally awesome and entirely tasteful and pulchritudinous (thank you, thesaurus....) snowman in our back yard (right in front of the neighbor's window.....) and so I suggested we make the base super big, bigger than any snowman they have ever made; I mean, I was thinking ladders and pulleys and the possibility for needing outside help. But then this strange thing happened: the gigantic base we were making started to look an awful lot like the body of..... you guessed it, a chicken! So, of course a lightbulb went off in my head (which, truth be told, happens so infrequently that it would be totally irresponsible of me to ignore....so really, I was just being a responsible person y'all, that's all....) and that's when this happened: 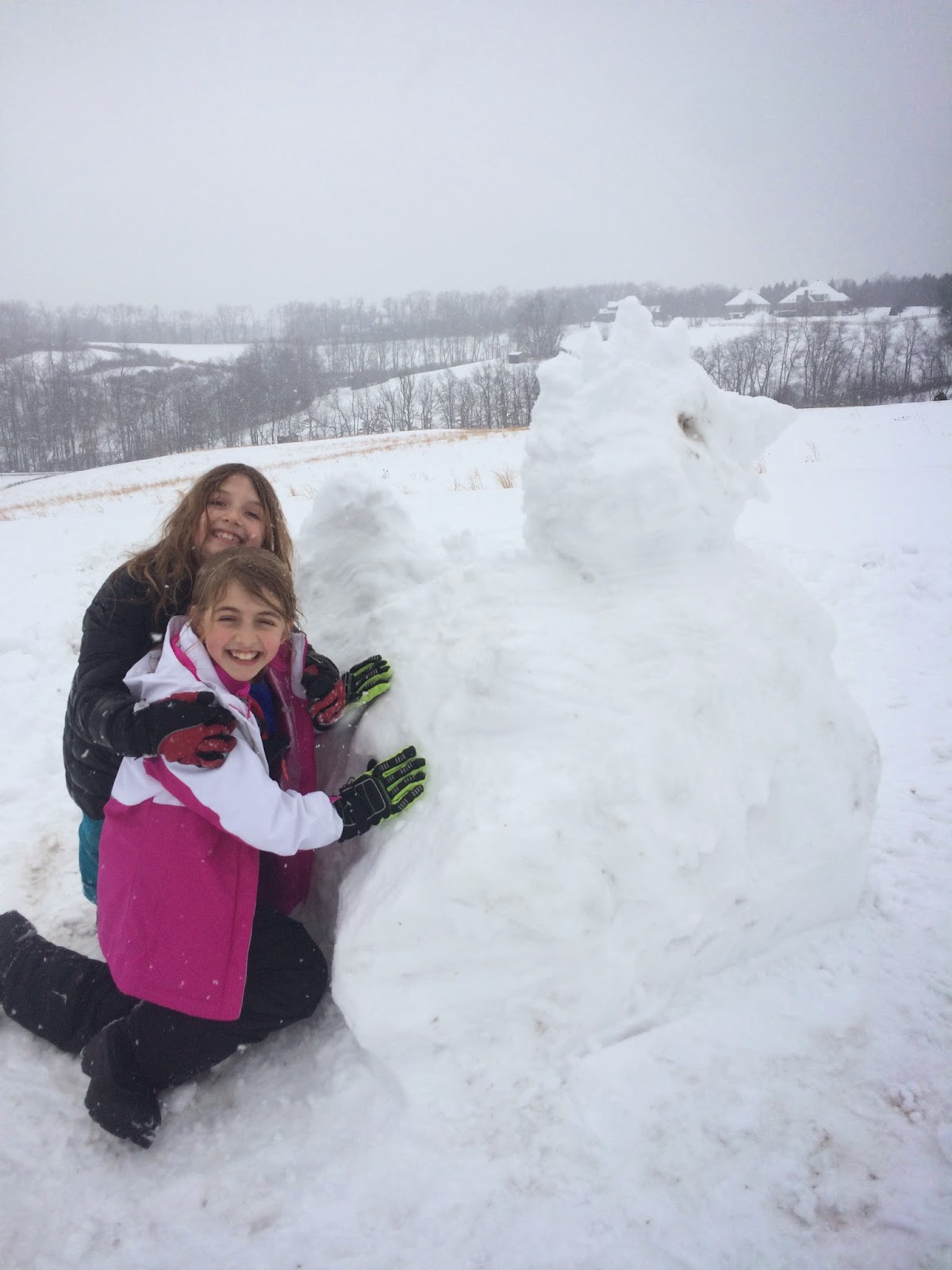 And then, one thing lead to another (you know how these things go) and an entire flock was born...... 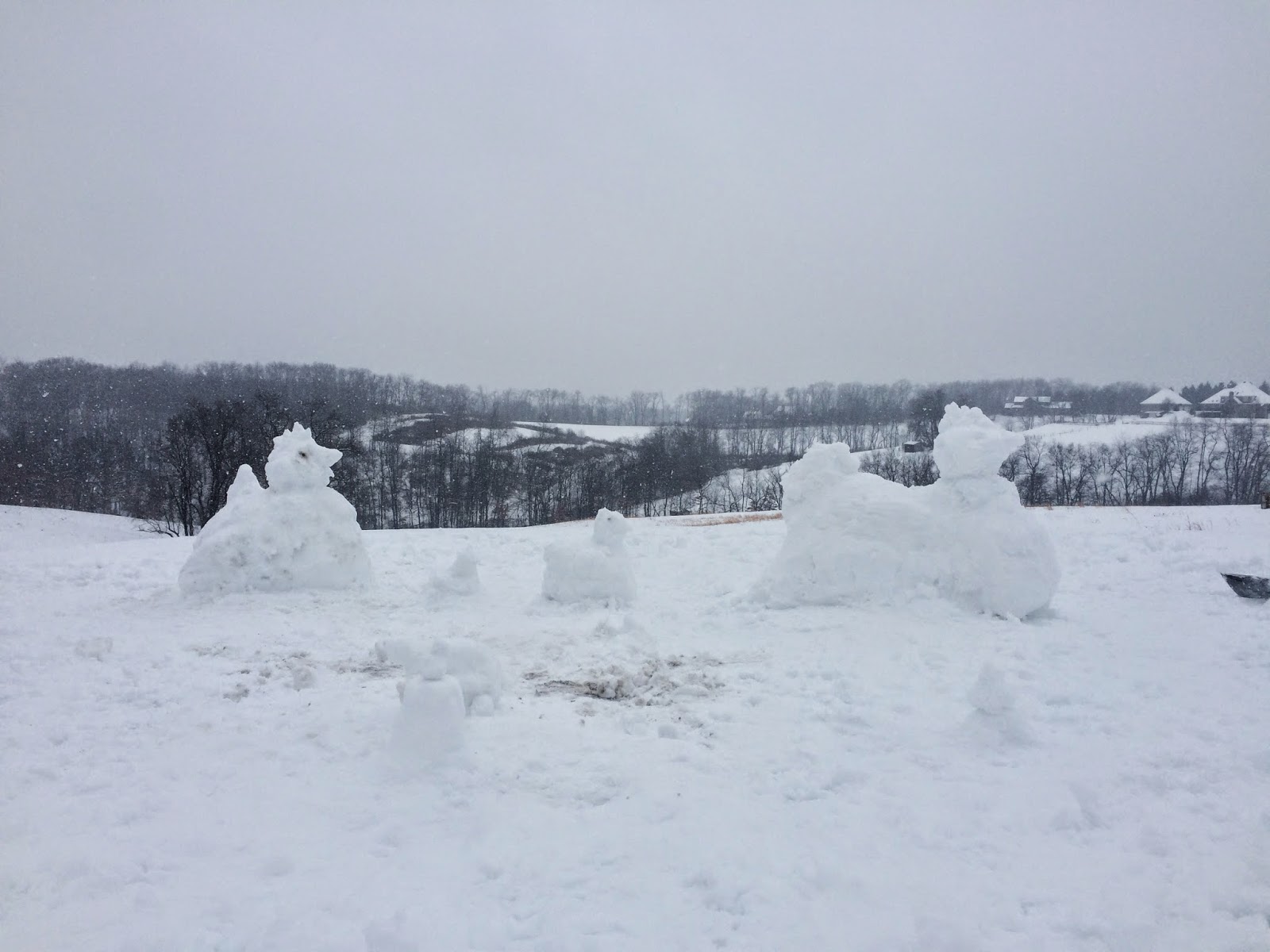 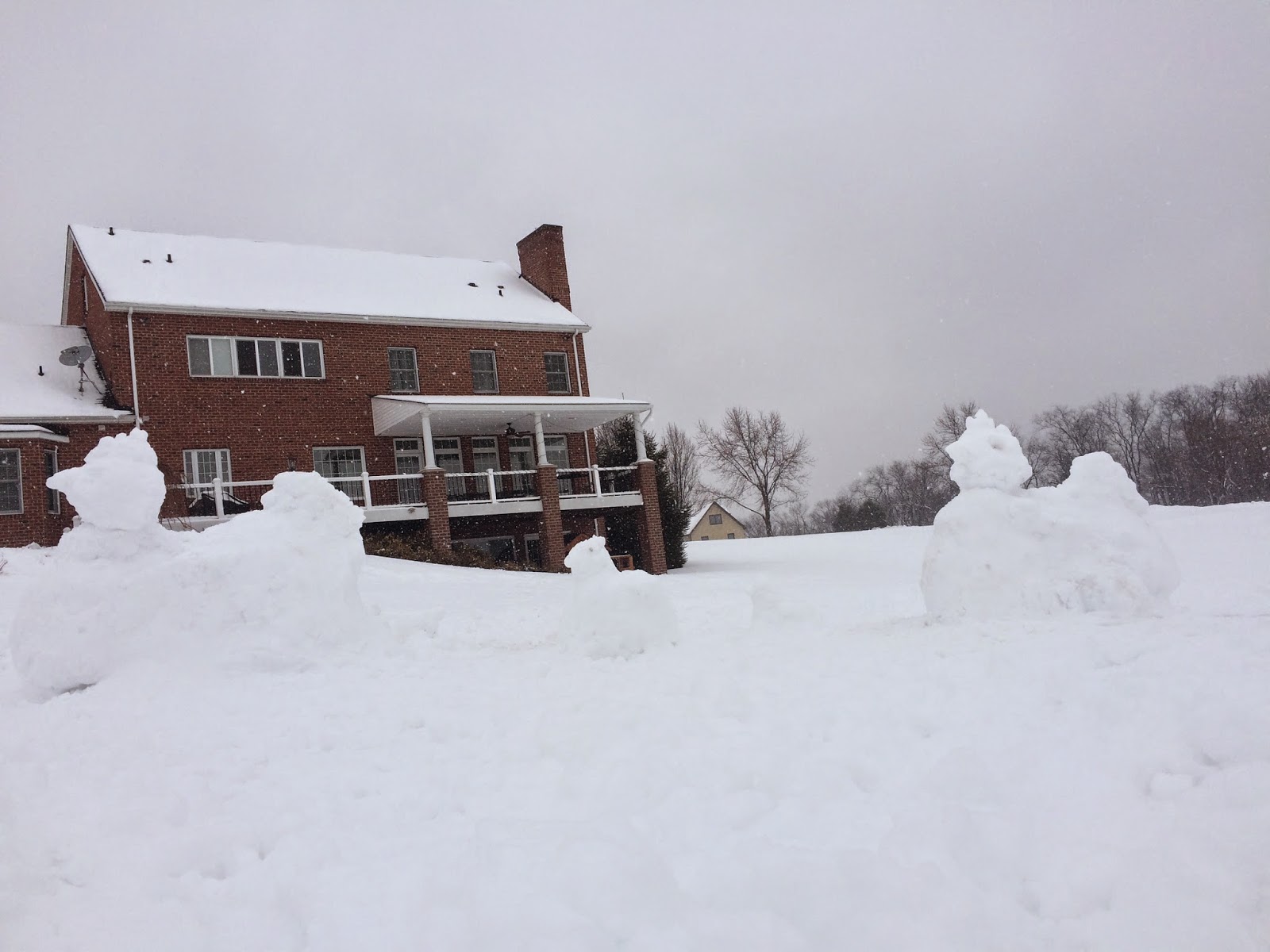 And so, then, one day, they started to melt and um.....wait, where was I going with this story? Well, I can't recall but there may just be snow chickens in our yard every winter FOR THE REST OF OUR NEIGHBOR'S LIVES! (You did this to yourselves dear neighbors, really, you did. Might I offer you the number of a good realtor? Or are you totally excited to see what I come up with in the spring????)

Have a happy last few weeks (months???) of winter!