Lessons from Moving to Mars

1) There is a benefit to being the teacher's pet. On the last day of school in MN, Madeline's teacher asked if she could keep Madeline in her classroom for lunch and order her pizza from a pizza place. She allowed her to bring two friends as well.....I wonder how come my teachers never ordered me pizza???? (Don't answer that teachers…..)

2) If you are going to attempt to fix your numerous dried out, deeply cracked and bleeding fingers by dousing them with liquid bandage in order to make packing easier, make sure you grab the right bottle and not the Clear Away Wart Remover. (And seriously Medicine Cabinet, where did THAT even come from?!?!) On the plus side, I will never have warts on my fingers because I believe the Clear Away mixed with my DNA somewhere in there….at least it felt like it.

3) If the moving companies say they will need two 24 foot trucks to move your stuff, don't think you can fit it all into one 26 foot truck if you just pack well. (I think this was Kurt's way of secretly forcing us to get rid of even more than we already did!)

5) Do not try to buy beer in Mars between the time church gets out and a Steelers game. (That line at the store would give Space Mountain during peak season at Disney a run for its money…..glad I planned ahead!)

6) The logic here fails me: You can only buy 12 beers at a time in the grocery store in PA. However, if you go right next door to the state-run wine and spirits store, you could buy two 24 foot truck loads of wine and liquor all at once, no problem. (But you'd still have to replace all your furniture.)

7)  Minimalism (i.e. purging ones belongings) is a life long pursuit but well worth the effort. (You know, if you enjoy those terrible dreams where you keep running and running toward your goal and the more you run the longer the road becomes to get there…..and if you ever do arrive you realize that what's there isn't what you thought you were running after and then you see what it was you wanted in the distance so you start running and running again only to find THAT road getting longer and longer and so on and so forth…..)

8) Not all cardboard boxes are created equally. (And if your only option is cheap Wal-Mart boxes versus carrying it all by arm, carry it:  Every.Last.Piece! See #7 for help with that!)

9) Moving can bring on the crazy like nothing else I know.

10) I love space. (This view from my kitchen window is well worth what it took to get here...) 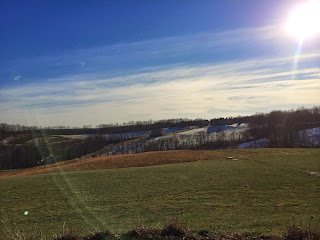 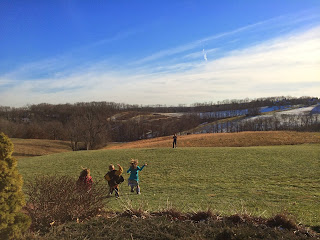