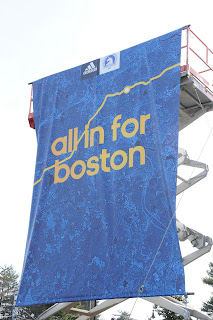 Sunday arrived and so did a sense of calm. Well, kind of. I had reached a new normal. It felt kind of like the best milestone parenting books never tell you about: the first time your kid can make it to the toilet to puke. It is a fantastic moment, them hugging the toilet while you simply watch from the sidelines knowing the only real cleanup can happen with a quick flush. On the other hand, it still kind of sucks that they are so sick.

It was that kind of milestone for me, being able to talk myself down from the approach anxiety and simply move through the motions of the day before the race, keeping the craziness all to myself as I silently counted down the hours: 24 hours from now I will be in the starting corral, 22 hours from now I should be over half done, 20 hours from now I will be finished, and so on. But it still kind of stunk not to freely enjoy the moment. Yet, I was determined not to disturb Kurt's relaxing vacation.

The day went something like this:
*Late breakfast
*2 mile shake out run (I didn't die, a big plus in the anxiety relieving department.)
*Coffee and reading at the Red Barn Coffee Roasters
*Lunch at Harry's (where we had been eating breakfast most mornings but man, those sweet potato fries were so worth doing lunch there....I even had them the next morning with my omelet!)
*Pick up dessert at the little Italian Bakery (or was that the day before....hmmmm)
*Watch TV and decide on dinner
*Dinner at Ted's Steakhouse (for the second time because MMMMM! Best Bison Burger ever! Yum!)

You may notice that the majority of the day focused on eating.....whenever I wonder why I run so much, it all comes back to a love of fries. At least, that's how I justify it.

And then it was time for bed. After telling Kurt I was really sorry if I died the next day because a marathon was really not worth it, and after he assured me I would be fine, I did not sleep. one. wink. Seriously. I tried. I got still. I didn't toss and turn. I just focused on my breathing and then watched TV and then read my book, went to the bathroom, read marathon tips and course overviews online, and then did it all over again. Maybe, maybe I fell asleep around 5 a.m. Wake up call was before 6!

And then it was showtime. The very familiarity of race day morning was terrifically calming. All my stuff was laid out and ready. We grabbed bagels and bananas downstairs, a couple espresso shots from a local Starbucks and then Kurt dropped me off on the outskirts of Hopkinton where I caught a school bus to Athletes Village. We were so early I was the only runner on the bus. It was awesome, you know, in a hyper-punctual nerdy kind of way. 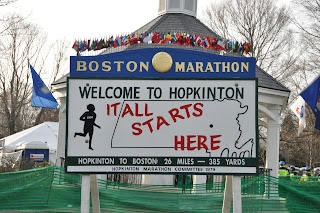 And then, after failing to meet up with one of my blog reader friends who was also running this year, it was time to get to the starting corrals, 3/4 a mile away. Yes, we walked almost a mile to get to the starting line (I know right? What's with that, Boston?!). And I timed it perfectly because as soon as I entered my second wave corral, the gun went off and we started moving.....you know, 2 minutes later. 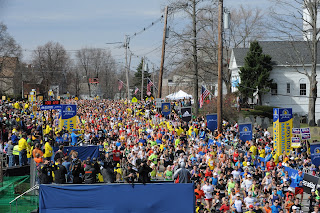 Mile 1: JUST KIDDING! I am not going to bore you with each and every mile! However, I will say that the first mile of Boston descends 130 feet. The difficulty lies in not going too fast. People often think running downhill should make it super easy but in actuality, downhill is really hard on your legs, especially quads and knees. My fear was that going out too fast would aggravate my injury on the downhills. For the first couple of miles, I tried to hold back. In retrospect, I probably didn't need to hold back so much but I wanted to play it safe so as to make it all the way through.

By Mile 11, it felt like someone had taken daggers and stripped my quads into shreds. This is a daunting feeling when you haven't even reached the half way mark or the four major hills of a rolling course. I tried distracting myself by talking to other runners (runners just LOVE a jibber jabberer next to them....). But eventually, I had to be quiet. My thoughts turned to Kurt, he was going to be waiting at mile 16.5, right after the first big hill, the only time I would see him, so I focused on getting there so that I could tag him "it". And then I got lost in my head, as I usually do eventually.

I pray a lot during a marathon. For this course, I made it a point to thank all the military along the way and to say a prayer for peace in the world and safety for our troops overseas every time I passed them. I tried to thank the police presence whenever I saw them as well. I said prayers for the handicapped runners and running teams pushing wheelchairs and adult jogging strollers. I teared up every time I passed an assisted runner, usually runners with down syndrome or autism. It is remarkable what humans are capable of even under the most difficult of circumstances, as we would see again later in the day.

And I was brutally aware of every descent as my quads screamed bloody murder anytime the road dipped. And the relief I felt as we would start up a hill was so welcoming that by the time I hit Heartbreak Hill (a half mile incline starting around mile 20 or so), I was smack talking the course. I got to the top where everyone was screaming and congratulating runners for making it up and all I could think was, "THAT was the hill everyone dreads? Really? That's all you got Boston?" Don't get me wrong, it wasn't a cakewalk but it wasn't any worse than the last few hills so I wasn't sure what all the fear mongering was about. And my legs felt GREAT (read: the adrenaline was going strong). So much so that I let myself go on the way down and even ran over to the crowds and started slapping hands as I went by. (Sorry little girl who took a diamond in her palm!) I regretted it a little bit later as I hit the final 5k and wanted to take off and realized my legs felt more like molten lead than bones and muscles and such. At that point I drew upon all the people I knew who were cheering me on and holding me up in prayer from a distance: family, friends, church, kids' teachers, Liam's speech therapist, so many of the staff at my PT's office and on and on.....and I started chanting Dory's chant, "Just keep swimming, just keep swimming, whatcha gonna do, you're gonna swim, swim, swim" and started concentrating on my arms and willing them to move as quickly as possible so that my legs would have to follow suit. It worked....or maybe the last Sports Gu kicked in, whichever.

As I rounded the corner onto Boylston street and could see the end, that "the finish is near" lump came up into my throat. I get this every time. It's as if all the pent up emotion, anxiety and relief just lodges there and I start half laughing in that maniacal sort of way, sweat and tears mixing making me look like a wild woman during my final sprint. And then there was the finish line and it was over. Three hours twenty-four minutes and fifty-nine seconds of pure adrenaline. A new personal best. 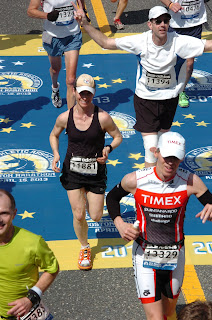 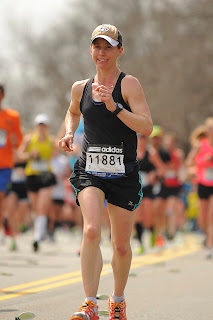 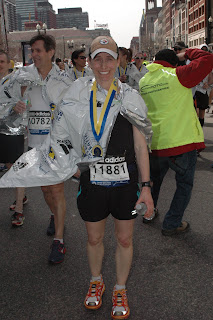 The post-race walk is surreal. Everyone just staggers along gathering post-race stuff: water, bag of goodies, foil blanket, recovery bar, medal; and then there are all those smiling faces, herding you on, reminding you to keep moving, congratulating you. At one point a fellow runner dropped his bag of goodies. Everyone in a ten foot circle just stopped and stared, laughing in horror: who was going to pick that up?! The poor guy was over 6 feet tall and we all cringed as he slowly stooped down to get it.

Finally we got to the bag busses. Each school bus (think dozens upon dozens upon dozens of busses) was assigned a grouping of bib numbers. Bib numbers are given based on qualifying times so the majority of people with bags on any given bus all arrive there to collect their stuff at the exact same time. As luck would have it, the woman on our bus trying to find numbers was horribly overwhelmed with the crowd of runners outside and became totally incapacitated, at least it seemed so. Fifteen brutal minutes later they shuffled us out onto the streets of Boston where I fumbled to find my phone while trying to find my way back to the family meeting area.

After about half an hour, I reunited with Kurt and we headed inside the Back Bay Hotel lobby to meet up with friends, discuss the race, rejoice together and simply sit still. And then I paused just long enough to realize that I hadn't quite met my goal time.....and started contemplating doing it all over again next year....because um, I love french fries....and because clearly I have a problem.

And then there were bombs.....