Kurt made an incredibly humbling point the other day. He asked: "So, after 20 days of getting rid of 21 things a day, do you notice a difference?"

Um, no (jerk). Not unless you count the difference in my thought patterns when I am at the store and I now assume that anything I buy will be tossed in the near future and so I simply do not bring it home to begin with....unless of course we can eat it, then all bets are off!

I had thought my last few Pack-Rat posts were somewhat inventorial but if I am to be fearless in my searching, then I must admit I have only begun to scratch the surface. What started out as a little humor, poking fun at an un-self-diagnosed issue that I thought needed a little addressing in order to soothe my naturally-minimalist husband's angst, has opened up into an entirely new dimension of self that clearly needs some major pruning. Funny how that works.

Recently I read that if your household income is just 50 thousand a year, you are in the top 1% of global earners. (If you make just 34k, you are in the top 4% of global earners and those barely making it at the U.S. poverty line? They are in the top 13% of the world's earners, give or take a little depending on where you get your data.) Chew on that for a second. We spent months watching people on the news yell and spout off about the top 1% of our country's earners, often in ways that vilified and condemned them, yet if we broaden the picture just a little to include, say, the rest of the world, well then the majority of Americans contribute to the inequalities that exist among humankind. And when I start to glance inward and really search what is in my own heart and life, it's like the first time a scuba diver swims over the reef and is witness to the incredible colors, rich beauty and abundant life of the world deep down under.....except instead of awe and wonder it's: "Ah hell! Sharks!" Mine happen to be sharks of excess. Which, when you get down to it, means greed has played far too big of a role for far too long. Greed, and um, idolatry.....ouch.

Please take note, I have never thought myself greedy. Very much the opposite actually. I came from an incredibly generous home and I have embraced that heart for giving to others. I don't covet the stuff my friends and acquaintances have, don't try to keep up with neighbors, don't typically care about the latest trends or technological developments, have no need to accessorize or replace things that aren't clearly broken. With the exception of jeans, which I wear everyday until they become Godly jeans (holey-er than thou), I buy clothes maybe once every 3 years or when I can no longer fix the holes. And even then, only when I can get them at rock bottom prices. And I would much rather give than receive. So, how am I claiming greed here? Well, just look at the stuff: 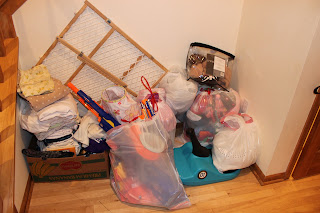 This is only the first week's worth of donations. It doesn't even include the stuff I threw out because it was worthy of the trashcan alone. The second week was just as bad and included three computers I gave to my friend's genius kids (and there is more where those came from) and my guess is, we will go on like this for much, much longer than 40 days. After all, who needs three crib mattresses when no babies are sleeping in cribs!

So, maybe it isn't greed as much as idolatry. I have unknowingly made idols out of unnecessary junk. I have given worth to worthless objects, held on to things as if they significantly add value to my life when in fact they do just the opposite. Maybe that is why this joke is on me. This 12-step program (that you are welcome to tune out at any time, or better yet, participate in...Woo hoo! Open Meeting!) is actually the very thing that I need in order to drastically change my living to reflect my values. These baby-steps are bound to be life changing, for the entire family. Already I have kids complaining that they have nothing to wear (because we gave it all away.....oh, and because I haven't done the laundry, but who's counting) and I have made mistakes, like getting rid of my one pair of rain tolerant shoes that I rarely wear only to find that I actually needed them today...but then, did I really? I survived (and so have the kids). And slowly, we are letting go of the stuff so that we are no longer being possessed by our possessions.

There's a quote from the movie Fight Club that comes to mind:
"You buy your furniture. You tell yourself, this is the last sofa I will ever need in my life. Buy the sofa, then for a couple of years you're satisfied that no matter what goes wrong, at least you've got your sofa issue handled. Then the right set of dishes. Then the perfect bed. The drapes. The rug. Then you're trapped in your lovely nest, and the things you used to own, now they own you."


I am tired of being owned by things (and certain fast-approaching marathons, but I'll save that for another post). And I am the only one who can change that. And in doing so, by jumping off the consumption bandwagon and creating a more minimalist life, my little family takes the first tiny step towards ending our contribution to the world's great inequities, regardless of what percentage we land on. And maybe, just maybe, it will help Lily let go of the rock collection....that she SLEEPS WITH!
Posted by karen diane at 8:10 PM