A couple decades ago, there was a study done on chickens out in CA where they put red contact lenses in the chickens' eyes in hopes that the lenses would boost egg production by reducing aggressive behavior in the layers.

The company that made the lenses claimed that chickens with the red contact lenses are "calm" but as one animal rights person said this idea "shows scientific naivete at best. In chronic pain, discomfort, or distress, chickens and other organisms, including humans, tend to acclimate to the chronic noxious stimulus showing only very subtle outward signs of pain. They reduce their activities, develop guarding behavior, and may even deteriorate to a state of learned helplessness indicating that they have succumbed utterly to helpless despair and the destruction of their personality and will." (http://www.upc-online.org/RedLens.html)

Yesterday was the first day of school. While up until then the kids had been half grumbles, half excitement, I could hardly contain my giddiness. Eight hours, five days a week with just two kids at home.....and come September, three of those days will leave me with only one small child....although I will admit, as the Master of Destruction, Solomon alone could bring down our entire universe in one swift Solomove. It ain't exactly hammocks, books and bon-bons around here to say the least.

A great example happened right after getting Aidan, Madeline and pants-tucked-completely-in-to-her-lace-lined-socks-Lily on the bus. You see, I brought the two chicklets home to get them fed and ready for the day. Since we didn't have to be at my physical therapy appointment until noon I decided to use the time to get all our home and school folders and drawers ready for the year. I took out some colorful flashcards for the boys to play with and then went to work sorting, organizing and throwing away. As I decided "keepsakes or trash", I looked up often to make sure the boys were still where I could see them. At one point, Solomon grabbed a handful of cards and walked around to the other side of the leather sofa. I could see his little head bobbing up and down as he played enthusiastically with the cards, so I thought. A few moments later I see him rounding the corner with a Sharpie, opened and ready for the kill.

I chased Saruman the White down and disarmed him of his staff. Returning to the couch, I realized my mistake in thinking he had been playing with cards. His head bobbing had been the enthusiasm of a tiny artist channelling his inner Picasso.....ALL.OVER.THE.LEATHER!

Then, in my panic, I grabbed a Magic Eraser. Surely a Magic Eraser could fix even this, right? If by "fix" I mean transform the rich, dark brown sofa into an orange disaster, then sure, it fixed it. Well, it DID take out the Sharpie....now I just have to figure out how to re-stain the leather.

And that is what lead Solomonster into his next predicament: 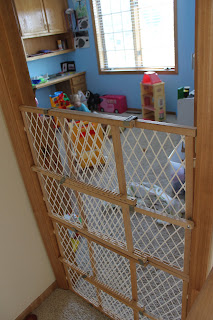 That gave me about five minutes until I heard him rustling around in MY BATHROOM and went up to find this..... 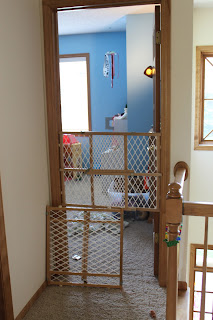 Gosh darn the football training camp he apparently endures as the youngest of 5......he apparently is too strong and skillful for his own good. (Or mine!)