Joyful Parenting through the "Woe Is Me" Moments

Parenting is joyful. It truly is.

Yet too often we parents play the "woe is me" card because of the tough situations we are experiencing. We all do it. (If you're sitting there saying, "Oh, not me. My kids are like rainbows and moonbeams," either you are lying to yourself, you aren't paying close enough attention, or you gave birth to angels who will one day just float back up to heaven amidst the sweet melodies they are playing on their little golden harps....at which point you will join the chorus of "Woe is me!")
Perhaps you are the quiet type who doesn't verbalize it aloud. I imagine the thought or feeling has surfaced and you dutifully crammed it down deep inside your soul as to not let on that this parenting thing has some rough spots here and there. No matter. You'll still get this.

You see, for all the sweetness, and joy, and wonder that parenting brings, there are equal and opposite forces. (See, that Physics still comes in handy....) We are faced with more snot and puke and blood than we thought imaginable (ok, maybe that blood part doesn't apply to everyone) and we have to deal with it through half awake brain fog that only lifts ever so slightly once the kids get to school.
But what no one really tells you is that once you have kids, you can't actually go to the bathroom by yourself.....for like the next 18 years.
We have a fairly big house: 5 bedrooms, 4 bathrooms, two offices, three levels.....yadda yadda. And if I could just have a dime for every time 6 of the 7 of us have ended up in the tiniest of bathrooms ALL AT THE SAME TIME, I think Kurt could retire. Really. It is amazing.
And when I get to the "Woe is me" point and lock them all out, this is what I come back to:
Fortunately, it wasn't that bad; just a tiny laceration, almost perfectly lined up in the middle of the eyebrow. I figured Urgent Care would just glue it back together so after cleaning it up and applying a little antibiotic cream, I just glued that baby shut with that random bottle of skin glue I bought a few years back. Ta-da! (Look, Mom! No ER!)
It didn't really affect him actually. In no time at all he was dumping crayons and acting all Solly-Wally-Doodle-All-The-Day!
And then there is the fact that we parents have to pay homage to the bathroom gods so that maybe we can  get in the quickest of showers each day.
I was fortunate enough to have found favor with the great shower lord when Solomonster was sleeping yesterday and so I snuck in to get washed up after a long treadmill run. What I failed to underestimate however was the creativity which Liam brings to his mischievousness.
I told him I was going to take a shower and he could come up if he needed me. He was playing quietly and said, "Ok, Mom!"
Ahhhh, so refreshing. So relaxing. So.....(BEEP BEEP BEEP) ACK! Good Feeling Gone! The alarm was telling me Liam had left the building! (I swear, just yesterday he could not even turn the lock, much less open that door!)
I jumped out, yelling at Liam to close the door. He came skipping upstairs, all smiles. After getting myself pulled together we went back down and I noticed the bathroom door was ajar so I went in to turn the light off when I discovered this: 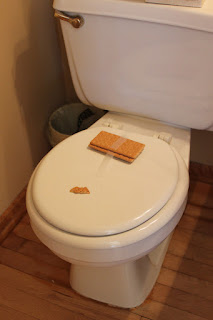 Hee hee....It was like Guantanamo Bay for Honey Grahams. I imagine he was threatening to pour water on them until they told him where they were hiding the Nutella. (At which point he most likely planned to douse them in Nutella and eat them anyway.....)
Ahhh, you see? Rainbows and Moonbeams! Parenting is joyful. (Sometimes you just have to hold your breath and wade through some unidentified green stuff to get there!)
Have a spectacular day!
Posted by karen diane at 8:30 PM