Day at the Farm

Last week I alluded to an upcoming post about going to the farm. Well, here it is. (Better late than never!)

I had the privilege of chaperoning Lily's preschool field trip to Gale Woods Farm. To tell the truth, this is the one field trip I make sure to go on with each of my children. We love the farm (ok, I love the farm so they HAVE to love it, like it or not!) I can't do justice to all that takes place on the farm field trip but I did take plenty of pictures to share, so here is our visit to the farm, partly told in pictures.

We started by meeting Farmer Dan, an older farm hand who I am sure is doing his best; he just didn't seem to particularly like children much, or maybe he just lacks enthusiasm in general. Or maybe it was just OUR children, who knows. And while I try not to judge, it does make one wonder why he is working as a farm educator. At any rate, he first took us to meet the pigs cooling off in the mud. 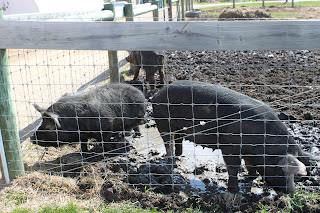 Then we walked past the sheep and were given the instructions to keep our hands and body AWAY from the electric fence. And I became the sheep-dog parent trying to herd little curious boys away from the hyped up wires so they didn't keep getting yelled at by Farmer Dan, all the while thinking, "Well, they'll only do it once and it might be pretty funny to see....." but alas, I did my duty and will have to wait until next time to see if anyone accidentally forgets about the electricity. 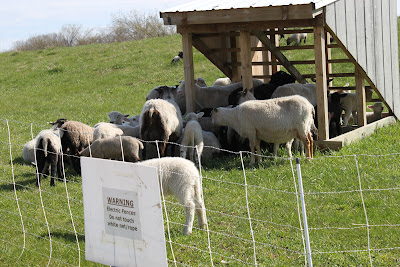 Then we passed the lone chicken; I am guessing he is the rebel of the free roamers as he sat there, all alone by the fence just watching us pass by while all the other chickens were a hundred yards away, close to the safety of an outdoor coop. (Or perhaps he has just touched the fence one too many times.) 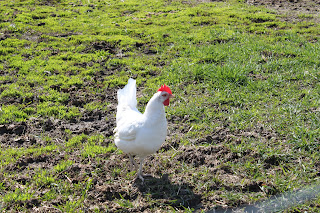 We made the trek down to the piglets who came running and squealing to see us.....because we had food to give them and apparently they like that. Lily was picking dandelions however.....and while they were quite perty down there on the farm, I didn't agree to allow her to bring them home for daddy; I didn't think he'd be appreciative given his hard work getting rid of them from our own yard.

Next we watched the meat cows go poop. Seriously, I am not being crass here. (Ok, maybe a little.) We just happened to arrive at that exact moment in time and the kids thought that was the neatest-grossest best thing ever. Ewww. (Don't worry, I didn't get that picture......yes, I tried, but Lily didn't get to the shot fast enough and well....oh never mind.) 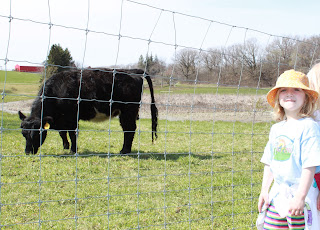 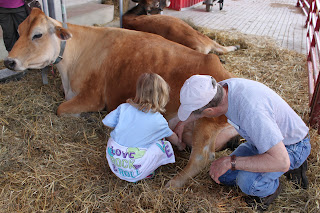 And because they were not traumatized watching the elimination of meat cow excrement, Farmer Dan took us to see the milking cow next where he pointed out the chief difference between the milking cow and the meat cow: we don't eat the milking cow. Thanks Farmer Dan for that. (Ya couldn't have just told the four year olds we don't milk the meat cows? Or that one has long black hair and the other short brown?.....But, I suppose it is a fact of life....and death.)

Lily enjoyed learning how to milk the cow and was excited to give it a go herself until she squirted the milk all over her good shoes....shoes I didn't realize she was wearing until she had stepped into a puddle earlier on the dirt road. My bad. But the milk bath was by no means a show stopper. I just explained that Solomon drenches me in milk all the time and it washes up just fine. And his is already half digested! Yuck!


After milking the cow and then getting a good look at the new Wormery they are tending (if you don't know what a wormery is, you really ought to click on that link, Lily was thrilled, to say the least), we headed into the barn for my favorite part. I'm sure you (chickens) can't guess (chickens) what that is (chickens). First stop was the baby chicks that they raise for meat. Here they are looking at us looking at them. Or maybe they are planning their escape.... 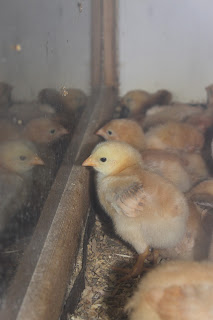 Again, Farmer Dan, thank you for the details on meat chickens, the kids may just go vegetarian now. Then we made our way through the chicken coop. It was fantastic. Farmer Dan took out a hen to show the kids and subsequently forgot to close the door. Never fear, Graceful Chicken to the rescue! I rushed over and was able to push the curious girls back inside. And since the clueless Farmer Dan was taking so long in his Hen and Egg dissertation, I knelt down and peeked inside the coop with my camera to take some eye-to-eye pictures. As if on cue, the girls started lining themselves up for the photo op. It was hysterical and I am grateful for the terrific chicken pics. 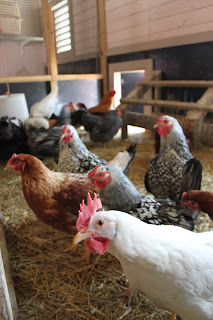 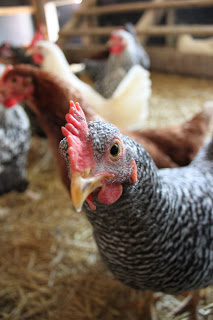 We then headed to the greenhouse to see what kind of goodies they had growing inside. That is where I started taking pictures solely to remind me of things to do in my own garden: Plant mustard greens, asparagus, rhubarb, put straw around the strawberry bushes, teach the kids to weed (thanks Farmer Dan for beginning that lesson), perhaps fence off various sections of plants by type, etc. etc. 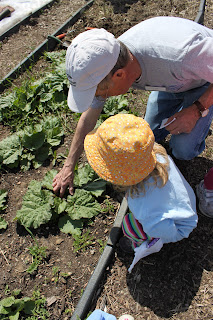 Finally, it was time to go back to the sheep and spend some quality time with the mamas and their babies where the kids got a good dose of reality watching mothers go potty while simultaneously feeding their young. Ewww, or is it ewe!....  (I was telling Kurt all about it that night, in a kind of disgusted tone and then a few minutes later laughed as I was feeding Solomon and had to get to the bathroom RIGHT THEN....I suppose when nature calls, it calls....hey, just keepin' it real! I suppose we are just dignified animals after all, and that's being generous for some of us!) 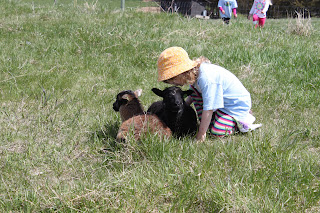 I was fortunate to catch Lily all alone being sweet to a little lamb and then a few minutes later, she got a little sloppy surprise from another lamb who happened to think she was quite a treat. The salty sweat perhaps?

All in all, it was a terrific day. On the way home I told Lily, "Thanks for letting me come to the farm with you today. I had a great time. We should try to convince daddy to let us move to a farm one day, don't ya think?"

Hmmm, not sure if she was paying attention AT ALL on the farm trip....I can just hear it now:

So, Karen, what do you raise on your farm?

Well, we have roosters.....And giraffes....'cause, you know, they taste a little like chicken. 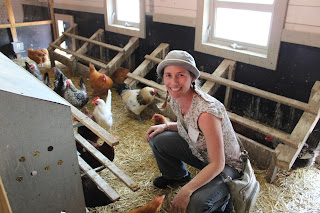 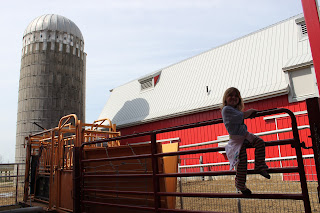